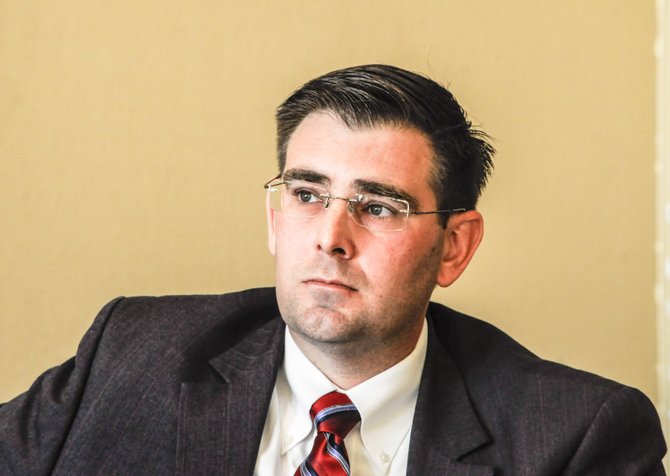 Rep. Andy Gipson, R-Braxton, believes it won’t be hard to police women’s right to an abortion under a new 20-week ban the Mississippi Legislature passed, although few abortions happen in the state after 16 weeks. Photo by Trip Burns.

A female Mississippi senator is questioning a 20-week abortion ban that awaits signature from Gov. Phil Bryant, saying the bill is not grounded in medical fact.

Sen. Deborah Dawkins, D-Pass Christian, questions how legislators are going to determine the "gestational age" of 20 weeks to know when to cut off a woman's right to have an abortion in the state. The bill defines the "gestational age" as "the time that has elapsed since the first day of the woman's last menstrual period as determined using methods consistent with standard medical practice in the community."

But women do not always have a regular menstrual cycle, Dawkins said. "How do you police this?" she said.

Rep. Andy Gipson, R-Braxton, said Monday that the 20 weeks will be determined and regulated "as in accordance with accepted medical practice in the community."

"That means a sonogram, an ultrasound, and that's actually used by the Department of Health in other contexts as well," he told the Jackson Free Press at the Stennis-Capitol Press Forum. "So I think that was an issue that was already addressed in the bill and will be the best way for anyone to know the gestational age of the child."

"The intent was not to back it up before 20 weeks. It certainly is meant to be a 20-week ban," Fillingane said.

Fillingane said Mississippi legislators were "playing catch up" with the other states who already enacted similar abortion restrictions. He admitted that assigning a start of a pregnancy can be difficult, especially with medical advances such as in vitro fertilization, but a woman's last menstrual cycle is what other states have adopted as determining the start of a pregnancy.

In the 1973 Roe v. Wade decision, the U.S. Supreme Court ruled that states cannot prohibit abortions before fetal viability, which many medical experts put around 24 weeks. The Journal of American Medicine collected studies that show that fetal pain is unlikely before 23 to 30 weeks.

The National Right to Life Committee, however, distributes a 33-page report that suggests fetuses can feel pain before 24 weeks. The scientists cited in that report, though, deny that their findings support 20-week abortion bans, which demonstrates a poor application of scientific evidence.

Dawkins said this bill, which would make Mississippi the 21st state to adopt such a ban, according to the Guttmacher Institute, demonstrates that legislators "do not have the knowledge to make these sorts of decisions."

The "fetal pain" bill makes exceptions for women facing life-threatening pregnancy—the kinds of pregnancies that are typically terminated after 20 weeks—but lawmakers rejected an amendment to the bill by Sen. Derrick Simmons, D-Greenville, to create exceptions for pregnancies as a result of rape or incest.

In a Planned Parenthood news release, Felicia Brown-Williams, director of public policy for Planned Parenthood Southeast, said the abortion ban is an example of politicians forcing themselves into medical decisions. She said abortions later in pregnancy are often due to abnormalities and life-threatening conditions.

"Further, a young woman who is a victim of incest or rape may not know she is pregnant, or may hide a pregnancy due to fear and stigma.  And no woman who has been raped should be forced to carry a pregnancy that is a result of an attack," Brown-Williams wrote.

Dawkins said if this kind of restrictive legislation affected men's health care, "there would be an uproar," but because the discussion surrounds women, legislators don't care to make decisions based in medical evidence.

"Because this is women's bodies, and they're used to controlling women in so many other ways, they're very comfortable with it," Dawkins said.

"That's a totally irrelevant piece of legislation that I'm sure was aimed at the clinic. The clinic goes to 16 weeks, so what difference does that bill make?" Derzis told the JFP in early March. "They have been posturing and wasting the taxpayers' money for the last month on that piece of legislation, and every legislator there knows that."

Dawkins said that Mississippi legislators' knowledge is "mostly anecdotal" and not based in scientific fact. She said the legislators who supported the ban do not cite research when they make claims regarding women's reproductive health. "They have nothing based in fact," Dawkins said. "There is nothing that I'm aware of that has been published and peer-reviewed that is considered worthy of making these kinds of decisions."

"And it doesn't really matter how it affects the majority of citizens," Reddix said.

Reddix believes the greatest problem Mississippi abortion providers face is gaining access to hospital facilities. Anti-abortion legislators both want to require the state's abortion clinic to have admitting privileges—and to make it impossible for doctors such as Reddix to offer admitting privileges to abortion-clinic patients, thus creating a legal loophole to close the clinic.

Reddix was caught in that controversy when Lt. Gov. Tate Reeves took him off the board of health because he had agreed to provide care to patients of Jackson Women's Health Organization who needed to be admitted to a hospital.

An "admitting privilege" requirement is "the issue threatening the lone clinic in our state," Reddix said.

Gov. Bryant—who was co-chairman of Yes on 26, the failed 2011 Personhood initiative—says he will sign the new 20-week ban into law. "This measure represents a great effort to protect the unborn in Mississippi," he said in a statement.

R.L. Nave contributed to this report.