A Waiting Game: What’s Next with ‘One Lake,’ Flood Control? 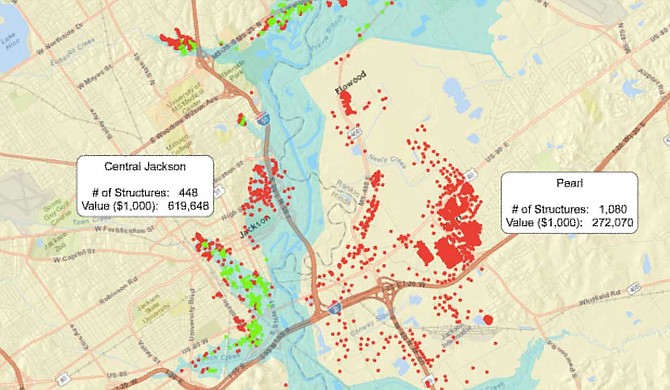 The Levee Board must respond to all the comments submitted about the “One Lake” draft environmental impact statement before it can send the document up to Washington, D.C., for the U.S. Army Corps of Engineers to review it. It is unclear whether the public will get to know all the answers, however. Photo courtesy Rankin-Hinds Flood and Drainage Control District Draft Feasibility & Environmental Impact Statement

JACKSON — Despite multiple roadblocks and open questions, the controversial plan to create a large lake along the Pearl River for flood control and potential development in the Jackson area continues to move ahead as project sponsors respond to thousands of comments that poured in last fall. 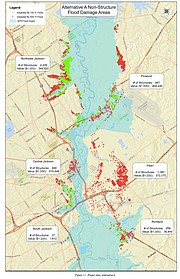 Nearly eight months ago, the Rankin-Hinds Pearl River Flood and Drainage Control District, referred to as the Levee Board, released its much-anticipated draft environmental impact statement with a series of public meetings. It received more than 3,000 comments, all of which the Levee Board must address in its revisions to the draft EIS. Thousands of those comments were an identical letter, however, so the district's contractors are really working to respond to hundreds of comments, not thousands.

The "One Lake" plan promises to provide flood control for parts of Jackson, Flowood, Pearl and Richland along the Pearl River. However, it does not completely protect all property in the 100-year flood zone, despite project sponsors using the Easter flood in 1979 to push the need for the project. And while the local district—made up of city and county leaders—is supportive of the "One Lake" plan, other politicians are not, especially downstream along the Pearl River in Louisiana where opposition is loud and bipartisan.

Concerned about the downstream impact of a lake along the Pearl River, Louisiana lawmakers in the U.S. House of Representatives added specific steps for the Pearl River basin project to the federal  Water Resources Development Act, known as WRDA, in recent months.   Signed in late 2018, current WRDA legislation ensures that the "One Lake" project will take "potential adverse impacts" into consideration as well as ensures that "the Secretary shall follow current USACE Policy, Regulations, and Guidance, to assess potential adverse downstream impacts to the Pearl River Basin."

Project sponsors maintain, though, that nothing is new in that language.

"Those requirements already existed," Turner told the Jackson Free Press. "All this does is restate what was already existing. I mean, the term 'adverse impacts' is something you don't find (previously), that more clearly articulates the point, but if you go to Corps policy and Corps regulations, those burdens were always there."

Environmental groups in the Jackson area and downstream along the Pearl, including communities and lawmakers from Mississippi and Louisiana, have raised myriad concerns about what a lake could do to downstream communities that rely on the river for everything from water to industry.

Andrew Whitehurst, water program director at the Gulf Restoration Network, said some of the WRDA language is, in fact, new. WRDA now says that "the (Army Corps) secretary and the non-federal sponsor shall jointly agree to the construction design of the project." Whitehurst said this language makes it easier to question more because the district cannot begin the pre-construction engineering or design phase without a green light from the U.S. Army Corps of Engineers.

"If they could have started the process of design and engineering, and spend  $20 million to $30 million, it would have been a whole lot harder to stop the project or make changes to it or really question their alternatives," Whitehurst said.

Regardless of what changed or did not change with WRDA, Turner said the district is looking to several federal sources of funding for the project but would not reveal exact sources. "I really don't want to delve into it deeply because right now all of those are very early in the stages, and we may end up going a different path even from them," he said.

The district will not pursue funding or a bond for "One Lake" from the Legislature this year, after a bond bill passed out of the Mississippi House but died in the Senate last year, however. Turner said that decision was due to a "multitude of factors," but the district could still apply for or receive funding from the Mississippi Development Authority in the future, which allocated $200,000 for their initial studies. The Levee Board is contracting with the Pearl River Vision Foundation, which oilman and lake initiator John McGowan started, to produce the EIS and do the research.

Taxpayers who live in the flood-control district right now, as well as private funds the Pearl River Vision Foundation raised, are paying for the research and preparation of the final EIS. Turner said he hopes the EIS will be finished in the next few months, with all responses to comments included, so the district can send the revised EIS up to D.C. by this summer. Then, the Corps will review the document according to their policies and procedures. If it deems the EIS to be in compliance, it will release the final environmental impact statement for public comment again, this time nationally and through the federal EPA.

Before any pre-construction on the project can begin, the Corps secretary must sign off on the pre-engineering and design plans for the project. This part of the process could prove to be challenging for project sponsors, environmentalists believe, due to not only the political forces at play but also the comment letters prominent agencies have already released.

As a part of the proposed flood-control project, federal policies require the Levee Board to contract out an independent review of the project, as well as a U.S. Fish and Wildlife Service review. These reports, however, were not published for public review alongside the draft EIS, and neither is finished, yet. Turner said Battelle Engineering's independent review is "essentially completed" but not a publishable document, yet. While the district plans to include both of these reports in its EIS to the Corps, it is not clear whether both reports will be made public before final EIS approval.

"It kind of depends on timing," Turner said.

Some state agencies weighed in on the draft EIS last year. The Louisiana branch of the U.S. Fish and Wildlife Service wrote a letter to Michael Goff, president of Headwaters Inc., one of the consultants who helped prepare the report. The letter, which environmental groups made available to the Jackson Free Press, expressed Fish and Wildlife officials' concerns with the draft EIS.

The letter detailed several problems, including outdated sampling data used, treatment of lake alternatives and potential loss of habitat due to the project.

Turner acknowledged receiving this letter but noted that responding to comments does not always mean agreeing with them. "There's a lot of parts to that letter that we take exception to because we think they got some things wrong," he said. "... And we are responding, and we are working closely with them."

For instance, the letter suggests excavating parts of the banks along the Pearl to mitigate flooding. "Excavation of the mowed floodplain between RM 284 and RM 290 (below Interstate 20 up to Fortification Street) to a lower elevation would reduce water surface elevations while still allowing maintenance mowing. This should lower flood stages through this area reducing the chance of levee overtopping and reducing the height of proposed levees," the letter says.

The draft EIS listed more than 10 alternatives to the lake plan, including levees, but dismisses most of them on the basis of environmental damages or not enough flood control for the cost. As for the U.S. Fish and Wildlife letter, Turner said agency officials did not demonstrate how their suggested excavations would work.

"The effectiveness of flood risk management is not demonstrated in their proposal. It's easy to make a suggestion, but if you don't have the science and engineering to support it, then you can't really say whether it works or not, and our guys have suggested that it doesn't work efficiently," Turner said.

Whitehurst said he expects the Fish and Wildlife Service review of the project to reflect similar sentiments to the letter from last fall. "They will have better data, and they will be able to say that what was presented by the drainage district was incomplete or wrong," Whitehurst said.

The public may or may not have access to this report before the Corps in D.C. approves the final EIS, depending on when the U.S. Fish and Wildlife Service gives its review to the Levee Board. At press time, Turner said the Fish and Wildlife review was likely weeks from completion.

The Mississippi Department of Transportation entered the fray of the "One Lake" project commentary last fall when it released a letter with concerns about the potential dredging of the flood-control project. The letter posits that seven to nine bridges could be implicated, potentially meaning costly repairs or replacements depending on just how much and how the Pearl is dredged.

The cost to replace one bridge is between $50 million to $100 million, a likely prohibitive cost for the State of Mississippi and one the federal government is not likely to fund, either.

Central Transportation District Commissioner Dick Hall said his department and the commission both are waiting to hear back from the Levee Board's consultants about their concerns.

"It will all depend on the specific information we are given about dredging. And until we get that, we can't say," Hall told the Jackson Free Press.

"All we can say now is that according to the information we have, we could have between seven and nine bridges that would have a problem—a serious problem—and may need to be replaced. Now, hopefully we will be able to be sent information that's going to be able to say, 'No, if it's done the way they say they will do it, it will be OK,' but we don't have that right now."

Turner said the district continues to communicate with MDOT and will address their concerns with solutions. He said the bridges will need to be reinforced, not replaced. "The bridges don't need to be replaced; that is not necessary," he said.

Hall said MDOT had not taken a firm stance in support or against the project and that it would not until the project's backers provided more details about the dredging methods.

Whether or not the "One Lake" project lifts off—and with full transparency about problems, costs and solutions—is a waiting game at this point. Environmental groups, which formed the "One River, No Lake" Coalition, plan to continue to highlight parts of the draft EIS they think are top concerns in the coming months, Whitehurst said.

In the meantime, the Levee Board continues to pay consultants to correct and update the EIS in order to kick the fate of the Pearl River in the Jackson area to engineers in Washington, D.C., even as the plan's critics accuse "One Lake" backers of cronyism and pushing a flawed plan forward.

Read more about the history of the flood-control project along the Pearl River in Jackson at jacksonfreepress.com/pearlriver.