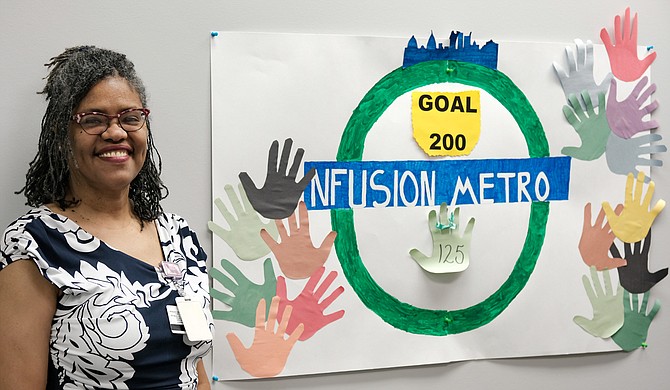 On a sticky and still June weekday, kids trickled into the cool, air-conditioned room on the second floor of New Horizon Church that smelled like homemade enchiladas. Some had swimsuits on under their clothes and carried backpacks with towels. It was a pool day.

To an outsider, this could be any community summer camp or school program—but it is much more. NFusion Metro is a community-based mental-health-care program primarily for ages 11 to 18 years old in the Jackson area.

During the summer, counselors are doing themed weeks for their lesson time. On June 8, the "Around the World" theme was focused on Mexico. NFusion staff made enchiladas and virgin margaritas for the students to supplement their bag lunches and engage them in the lesson. After lunch the students went to swim at the community pool and then came back for group or individual therapy.

NFusion Metro differs from regular therapy for youth largely due to the environment. No part of the program's rented space on the second floor of New Horizon Church feels like a doctor's office. A long, open hallway connects staff offices. Counselors, whom the organization calls clinical care coordinators, share office space, and printed-out selfies adorn their doors.

"What we're trying to do is have a non-traditional approach to therapy," NFusion Metro Program Director Sabrina Vance told the Jackson Free Press in February. "There is such a stigma regarding mental health, so the reason why we're not at the community mental-health center is because this age we work with—that population—they don't want anyone to know that they're receiving services. ...

"We're trying to provide a stigma-free environment, and that's why we're here at New Horizon Church."

The advantage of a program like NFusion Metro, Shakena Lee-Bowie, one of the counselors at NFusion Metro says, is that she can do non-traditional therapy. Vance said some young people come to the program through referrals from Hinds Behavioral Health Services or Henley-Young Juvenile Justice Center. Other times, families find the program through word-of-mouth or another doctor's referral.

'It Caught Me Off Guard'

Evandia Woods remembers sitting in the room with her son, Von'Tavius, during a regular doctor checkup and was stunned to hear his affirmative answers to questions about thinking of harming himself.

"It caught me off guard," Woods told the Jackson Free Press in February. "I was thankful because I had no idea. ... (He) went day-by-day just happy and doing things like he normally (would), so I had no idea."

The doctor referred her son to NFusion Metro, and Woods has seen dramatic changes in his behavior and their relationship since then. She said her son was not a big socializer before starting the program, but now that he has been in it for more than a year, he looks forward to interacting with his peers there.

"He comes every day that he can," Woods said. "It was real friendly and open; they made us feel like we were welcome."

When a family signs up to be a part of the system of care, the child, guardian, and counselor sit at the table and decide on what boundaries and care are necessary. Youth get individual and group therapy sessions as a part of the program, but they also have access to their counselor more directly. NFusion accepts all insurance, including Medicaid, and the program currently runs through a federal Substance Abuse and Mental Health Services Administration grant.

Parents and guardians get plugged into their child's mental-health care at NFusion, too. The program hosts nights specifically for parents to help break down the stigma of mental illness and bridge communication gaps.

Nadia Snyder has struggled with attention-deficit hyperactive disorder and got in trouble for acting out in school during middle school. She went to Hinds Behavioral Health for services, but at some point, her health-care coverage cut out, and she fell into a gap during middle school. When she was referred to NFusion Metro, she was nervous.

"I don't know these people. How can I relate to these people?" she recalls thinking when she first started.

Bowie, Snyder's care coordinator, agreed that Snyder should stick with it. She had a busy senior year. She was working two jobs, participated in Junior Reserve Officer Training Corps and was expected to help at home as the only child still living there. She came to the program when she could. Eventually, Snyder took a break from working and was able to start coming to group more.

"It helps me getting along with people because I'm really not a people person," Snyder told JFP.

Snyder, who is 18 and recently graduated from Forest Hill High School, says NFusion Metro is different than other therapies she has gone through. She can text Bowie and keep her updated on how she is doing at school or work.

"Because we do nontraditional therapy, she will text me about issues that she has ... and she'll tell me how she handled them in a positive way instead of snapping off or some of the old behaviors," Bowie said. "So she'll text me and say, 'This is how I corrected it or chose to ignore it.'"

The program has eased tensions in Snyder and her mother's relationship, Snyder said, and she helps out a lot more at home. Bowie attended Snyder's graduation from Forest Hill High School, and Snyder plans to attend a local junior college. In the meantime, she can still come to group and individual sessions at NFusion Metro because the program can serve youth up to 26 years old.

Vance is focused on making the program sustainable in the coming months, so it can continue after 2020 when the grant funds run out. Currently, the program is capped at 30 students a day, with a maximum of 10 students per counselor. This, of course, limits the reach of a community-based system of care. Vance said her goal is to create Rankin and Madison County NFusion Metro programs.

There are six SAMSHA-funded system-of-care programs similar to NFusion Metro statewide, including ones in Oxford, Southaven and Columbus.