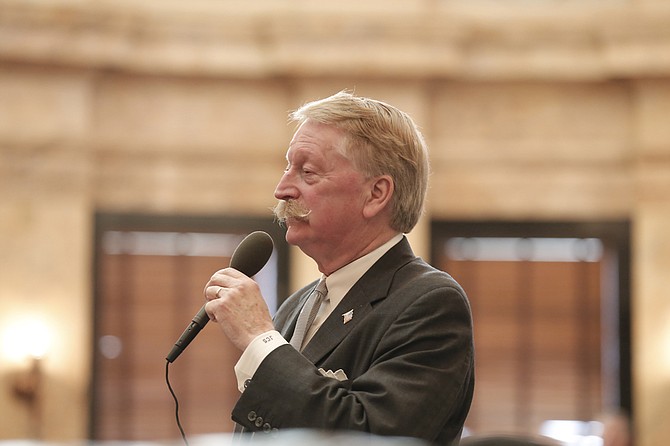 Rep. Jeff Smith, R-Columbus, brought the "One Lake" bond bill back for a vote after representatives had initially killed the measure. It passed by three votes on Thursday, Feb. 22. Photo by Imani Khayyam.

JACKSON — Proponents of the "One Lake" project along the Pearl River through Jackson got a financial boost when the Mississippi House of Representatives passed a nearly $100-million bond and loan measure by a three-vote margin on Thursday.

House Bill 1631 would authorize $50 million in bonds that the Rankin-Hinds Flood Control District, also called the Levee Board, could receive as a part of a loan agreement it must pay back in full. The bill also grants the district $45 million in previously unobligated bonds from the Mississippi Development Authority that it does not have to pay back.

Last year, lawmakers approved tax authority for the Levee Board to raise funds to pay costs related to bonds issued for the project, meaning property owners within the district that are "directly or indirectly benefited" by the project could be taxed to help foot the bill. Backers of "One Lake" say the development project will be an economic boon in counties on both sides of the river and promise flood control to help avoid a catastrophe such as the Easter flood in 1979. 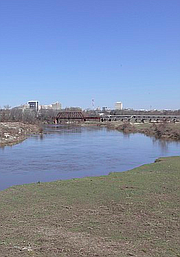 The JFP's award-winning coverage of efforts to develop and control flooding along the Pearl River.

Initially, representatives rejected the bond bill on Feb. 20 by 11 votes. Thursday's vote represented a dramatic shift when 44 lawmakers, both Republicans and Democrats, changed the way they voted.

Rep. Jeff Smith, R-Columbus, brought House Bill 1631 back up in the House on its deadline day Thursday, asking members to reconsider it, saying it had been fully vetted. Representatives had maps of the "One Lake" project on their desks, but not all were on board with the proposal.

Rep. Ken Morgan, R-Morgantown, spoke against the bill, saying many representatives who have asked for even $500,000 or $1 million in bonds for projects in their communities did not get them. He also questioned the intent behind the project.

"If this was all seriously all about flood control, I would be 100 percent for it," he told the House on Thursday.

The "One Lake" plan would widen the part of the Pearl River that separates Hinds and Rankin counties, essentially creating a lake. The plan is to use dredged material from the bottom of the river to build excess fill areas, creating additional riverfront property along either sides of the Pearl. The project's primary stated purpose is flood control, but critics question the economic development and potentially lucrative business opportunities the new property could create, including for partners and family members of those involved in the Pearl River Vision Foundation, started by oilman John McGowan, whose earlier vision of a larger "Two Lakes" development hit multiple roadblocks.

Both Two Lakes and One Lake have long been the center of controversy, from conflicts of interest, to environmental issues locally and downstream, to its cost and efficacy, to eminent domain and property taxes, to the potential for drawn-out, costly lawsuits to those concerns.

Representatives from Rankin and Hinds County are listed as the bill's authors, but Rep. Adrienne Wooten, D-Jackson, changed her mind on the legislation by Thursday. Wooten stood to speak against the measure, noting she was concerned about how it would affect her district.

"(One) question that I had is because my district is residential, can you show me or can you tell me how I can be sure that the constituents of District 71 would be protected?" Wooten said. "... I don't have that information, yet. A map does not give me the information about whether or not my constituents will be protected."

Wooten's district is not in the project area, the One Lake project map shows; however, Federal Emergency Management Agency maps show that parts of her district are considered special flood-hazard areas.

The One Lake project's environmental study is not public, yet, because it is still under review. The U.S. Army Corps of Engineers in Vicksburg and other engineers from around the country have reviewed the study, and the Levee Board is finishing the process of responding to comments from engineers.

Additionally, an independent review of the project has begun, the board's attorney Keith Turner told the Jackson Free Press. The board hired Battelle, a science and technology research company, to complete the review in the next 90 days. The Levee Board will send the project, which also has federal funding support, to the Washington, D.C., Army Corps of Engineers and be released for public comment before final approval.

Turner said the board will submit the final project to the Army Corps of Engineers by this summer. The Corps should make its final decision to approve or reject the project by fall 2018. Turner stressed that the bonds would not be authorized until the end of 2018 or even next year.

"We're not going to be given money without having something that's acceptable, approved and buildable," Turner told the Jackson Free Press.

The One Lake project falls under Section 211 of the Water Resources Development Act. That means the process for project approval is much more flexible than traditional Corps projects and, ultimately, the federal government can reimburse project planners up to a certain amount. The Corps authorized the Levee Board to execute the Pearl River plan as a Section 211 project back in 2008, when the plan was to create two lakes instead of one. The Two Lakes plan fell through, leading to the current scaled-back project proposal.

Smith asked representatives to trust the leadership on supporting the bond bill Thursday.

The measure now goes to the Senate for consideration.