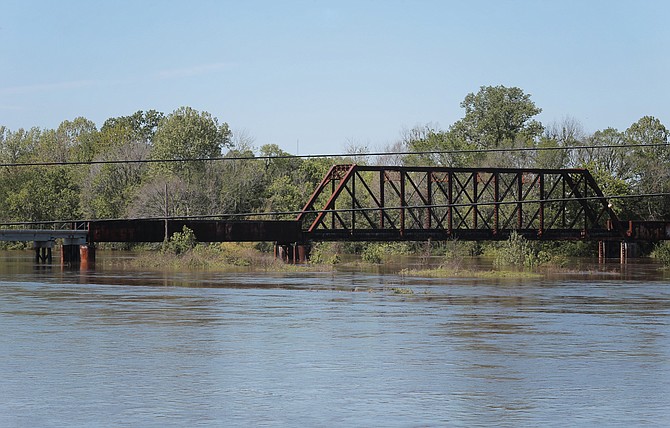 The Pearl River waters are expected to crest at 32.5 feet by early Thursday, April 6. This photo is of the Pearl from Old Brandon Road on April 4. Photo by Imani Khayyam.

JACKSON — The rains came in torrents overnight Sunday, causing flooding around the Jackson metro. As the sun returned early in the week, the City of Jackson warned of more gradual rising water along the Pearl River, which was expected to rise above flood stage by Tuesday night and continue to crest at about 32.5 feet by early Thursday.

At those levels, the City warned ominously, water can back up into local streams and creeks, flood Byram homes near the Pearl and Sidney Street; and even stream into businesses on South President and South Farish Streets in downtown Jackson.

The reality and unpredictability of the mighty Pearl waters bring the issue of long-delayed and debated flood control back front of mind in the metro, as the Rankin-Hinds Pearl River Flood and Drainage Control District, commonly call the Levee Board, prepares to unveil specifics of its "One Lake" plan to dredge and widen parts of the Pearl. The project, which its proponents prefer over strengthening levees and other anti-flooding options, is a still-ambitious strategy to create both public and private waterfront and developable property, including public-recreation access.

But the real pearl of the plan, its advocates say, is that it will rewrite 100-year flood maps—the level of devastating flooding likely to happen at least once every century—and vastly reduce expensive flood insurance that many who live and own businesses in the river's floodplain now pay.

The main financial benefit to One Lake, Levee Board attorney Keith Turner told the Jackson Free Press last week, is making that insurance affordable again for property owners now paying thousands of dollars to mitigate the high risk of flooding. "Our project is designed on flood-protection benefit, not financial benefit," he said. "That's what we have to look at first."

One Lake grew out of the ashes of earlier and more audacious lake plans that promised dramatic commercial value and flood relief—but flood control is the main thing now, Turner said. "Lots of people are going to talk about the economic-development components as a driving factor," he said. "There clearly is (economic benefit). We've got to help pay for the project, and that allows that."

The project got a boost when Gov. Phil Bryant signed House Bill 1585 on March 22. The new law allows the Levee Board—Turner prefers the term "Flood-control District"—to assess taxes on property within One Lake's projected property area once it has expanded the district to include additional land that will no longer need pricey flood insurance. The additional properties, which the Levee Board has not fully identified yet, will have a variable tax rate depending on its proximity to the project and risk of flooding, he said.

"People getting the most benefit will pay the highest fees," Turner said, citing a homeowner near Jackson Academy whose flood insurance is now $3,000, but who might pay less than $300 a year in taxes, although the tax strategy is not yet final.

Turner also pointed to a commercial owner off Lakeland Drive on the Jackson side who pays $9,000 but would be taxed at less than $1,000—and see the value of his lakefront property go up. "He won't have to have flood insurance any more," he said.

The attorney downplayed comments made by legislators such as Sen. Dean Kirby, R-Pearl, that the plan would create 1,000 acres of valuable waterfront property and lift property values. He opted to keep the focus on both the flooding and the public-access potential, such as potential new soccer and baseball fields along the Pearl on South Jefferson across from WLBT's station.  Even though the Levee Board has the legal ability to levy those taxes when the law takes effect on July 2, it cannot do so until it has finalized the plan and submitted it with "ample notice" to the public for comment and challenges, Turner added.

The Levee Board has worked for years with the Pearl River Vision Foundation, which raised about $1.8 million to fund the "One Lake" plan, including to engineers it hired. The foundation, first incorporated in 2000 as the Two Lakes For Mississippi Foundation by Delbert Hosemann to push forward the larger lake schemes, is loudly discussing environmental mitigation concerns now, locally and downstream.

Once the project's environmental impact study, or EIS, is ready to go public—by the end of April, Turner hopes—the U.S. Army Corps of Engineers requires that an independent engineering group vet the plan and suggest changes before final approval. During the same period, the Levee Board will solicit public feedback on the plan. Turner hopes that the often-delayed project plan will be final by this fall.

Turner said the Levee Board must control all the land within the "project area," whether temporarily for permanent, to create the lake. The board has eminent-domain authority, he said, "but we don't intend on using it." Instead, he predicts using one or a combination of strategies to control the land (in orange on the projected map) during the development stage: (1) acquiring all the property in the project area from "cooperative sellers"; (2) acquiring just portions of the property; or (3) acquiring property and using easements.

"The land ownership concept is still being fleshed out ... and will be finalized and presented to the board," he said. "We have working models; a lot can change."

A full archive of coverage is at jfp.ms/pearlriver.