Coalition Forms Against ‘One Lake’ Proposal 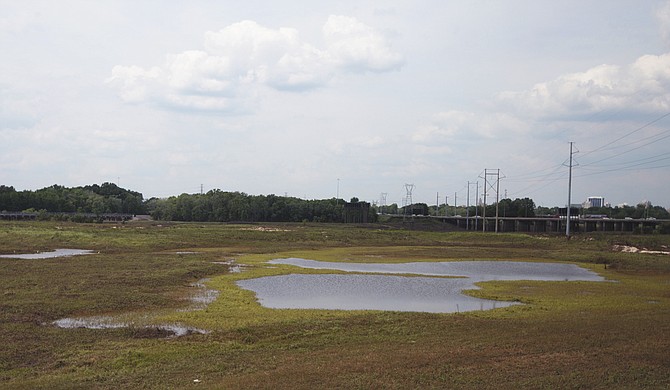 Several wildlife and environmentalist organizations formed a coalition opposing the “One Lake” flood-control and development project just weeks ahead of when the final report is supposed to be published. Photo by Imani Khayyam.

Several wildlife and environmental groups came together to form a coalition against the proposed "One Lake" flood-control/development project on the Pearl River a few weeks before the report detailing the proposal is published. The group, called "One River, No Lake Coalition" includes Pearl Riverkeeper, Gulf Restoration Network, the Jackson Audubon Society, Mississippi Wildlife Federation and the Sierra Club.

On April 24, the coalition hosted a public meeting to raise concerns about the Rankin-Hinds Pearl River Flood Control District's plan to deepen and wide the Pearl River between Jackson and Flowood, creating a lake. The stated goal is to prevent outcomes like the historic floods in the 1970s and 1980s in Jackson that destroyed several downtown businesses and left the coliseum in a massive puddle. The meeting drew nearly 100 people.

Members of the "One River, No Lake" group expressed concerns about what the project would do to wildlife in the area as well as the potential impacts to water flow and quality downstream.

A November 2017 survey of two imperiled turtle species that live in the Pearl River, including the Ringed Sawback Turtle, between the Ross Barnett Reservoir and down through the proposed project boundaries shows that the project would affect more than 1,000 turtles—causing a localized extinction for already threatened turtles who rely on a flowing river setting.

Andrew Whitehurst, water program director at the Gulf Restoration Project, says the coalition is beginning to look at alternatives to the lake project, including a greenway that could act as a long floodway park along the riverbanks. The key to this idea, Whitehurst said, is that there would be no development along the river.

"The danger is deliberately bringing structures and people into the floodplain when you can't guarantee that that reservoir and dam won't be overtaxed by one of those outlier floods," Whitehurst said.

He was referring to the historic flooding in the South in recent years in Houston, Texas, and Baton Rouge, La.

He said a widened river might not help combat flooding if the wrong rainstorm hits the upper Pearl. Above the proposed project is about 11 miles of winding river and above that is the Ross Barnett Reservoir, a massive lake not built for flood control. The reservoir regularly releases water to the Pearl below, and the water levels of the reservoir are not meant to fluctuate by design. That means the reservoir typically begins releasing more water in anticipation of a storm or heavy rainfall.

Dallas Quinn, a spokesman for the Pearl River Vision Foundation, says the full project report will address 16 alternatives that the planners considered then rejected. He noted that some alternatives, like "nonstructural solutions," would mean razing several existing structures in the floodplain and buying out properties, which would cost billions of dollars.

Oilman John McGowan, who has pushed for several rejected versions of lakes and development along the Pearl River in Jackson, started the Pearl River Vision Foundation to support plans for the "One Lake" project. He, his family members and associates in McGowan Working Partners, have long owned property along the proposed lake projects' footprints.

Members of the levee board also had interests in potential lakefront property in previous lake concepts.

The project's sponsors, the levee board and the Pearl River Vision Foundation, say now that economic development is not a component of the board's mission for the project, although it was a stated goal of previous lake concepts to date. The proposed "One Lake" project would dredge out the bottom of the Pearl River, widening it and creating additional banks (new land) on the Rankin and Hinds County sides.

Actual ownership of the new properties that the project would create is not "final in its legal form, yet," board attorney Keith Turner told the Jackson Free Press.

"We have to have control of the property to do the project, so some of that economic-development concept talk (the) opposition are worried about—'this whole thing is putting money in private citizens' pockets.' That's not at all what's going to happen here," Turner said.

"Because the district is going to have to be in control of all this property to build this project, so there aren't individual citizens who are finding a windfall of money because their value of property will shoot up immediately, that's not what's going to happen."

What will happen, however, is the levee board will expand the flood-control district's jurisdiction or footprint to cover more Jacksonians and more people in Rankin County than the district currently covers. The Mississippi Legislature gave the board the authority to widen its taxing authority to people who will see not only direct but also "indirect" benefits.

Once the more than 3,000-page  document is published, the public will have a better idea of what flood control benefits the project will offer. Everyone inside those district lines will see an increase in taxes to fund the project.

"We're working on the footprints for that—that will be happening in the later part of this year," Turner said. He noted that the people newly added to the flood-control district would pay the taxes because they "are going to be getting the benefit."

What benefits, exactly, the project provides are hazy as of now, and the report, which should go public this month, will show the specifics of how a lake on the Pearl River will help flood control.

The project will not, however, help flood control in the capital city's many tributaries, including Town, Lynch, Belhaven and other creeks that run in and through many parts of Jackson. While the project might help backflooding when the Pearl River floods itself, the project is not designed to help localized or flash flooding, often seen during a heavy spring rainstorm, when creeks that run through neighborhoods rise and drainage clogs.

A group of U.S. Army Corps engineers from districts outside Mississippi are reviewing the project report. Once it is published, the district and its sponsors will host public meetings, likely in June, giving the public a chance to review the document. After this process is completed, the report will go to the Washington, D.C., Corps of Engineers for final approval.

The "One River, No Lake" coalition plans to host public meetings as well in the coming weeks in downstream areas that the "One Lake" project could affect.

Read more indepth coverage of the "One Lake" proposal, and previous versions, at  jfp.ms/pearlriver. Email state reporter Arielle Dreher at [email protected]. Follow her on Twitter at @arielle_amara.