McGowan: 'Everybody's Together' on One Lake 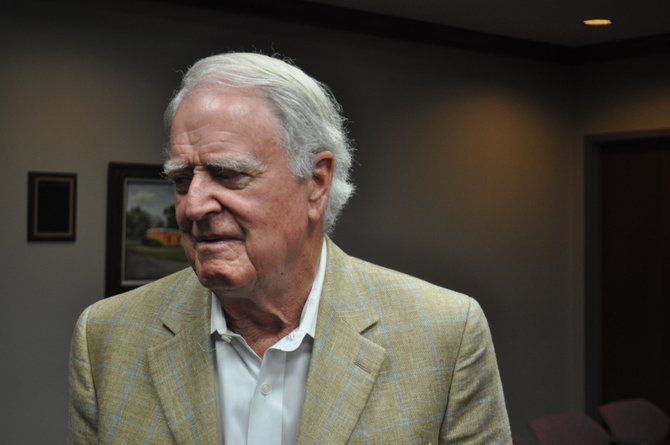 Not long ago, Rankin-Hinds Levee Board meetings were so contentious--complete with shouting matches and allegations of ethics violations--that it was probably the most raucous flood and drainage control district in the country.

Since scrapping the highly controversial Two Lakes plan in favor of a more modest single-lake concept in 2011, Levee Board meetings have been relatively tame.

On Monday afternoon, there was even more reason for the board to come together and--as Flowood Mayor Gary Rhoads put it--to sing a verse of "Kumbaya."

Monday's ceremonial signing--Rhoads officially signed the document weeks ago--of an agreement between the Levee Board and the U.S. Army-Corps of Engineers lets local officials move forward with developing its own flood-reduction plan.

This agreement, made possible under Section 211 of the Water Resources Development Act of 1996, lets the Levee Board take the next step: conducting the environmental-impact study the federal government requires before a flood plan can be adopted.

The Pearl River Vision Foundation, a not-for-profit association started by Jackson oil magnate John McGowan, will conduct the study on the Levee Board's behalf as well as foot the bill for completing the study.

McGowan told the Jackson Free Press that any economic-development efforts associated with the flood-control project would hinge on the findings of the environmental study, but added that he does not foresee the obstacles that held the project up this long being a problem going forward.

"I think everybody's together on this particular plan," McGowan said.

Without the agreement, the process could take three or four years and cost twice as much, board attorney Keith Turner said. Rhoads added that getting the agreement in place represents the end of three decades worth of hand wringing over flooding along the Pearl River.

In spring 1979, the river swelled 25 feet over flood stage, displacing 17,000 residents and causing $500 million in damage, prompting a litany of proposals in the intervening years, including expanding the levees and the development of a lake system.

Environmentalists and the Corps panned McGowan's initial vision of a two-lake system that would offset construction costs through real estate and other economic-development activities as environmentally damaging and cost prohibitive.

Dallas Quinn, PRVF's spokesman, said that the organization plans to hold a public meeting within 90 days to solicit input on the project, which must comply with National Environmental Policy Act. In addition to taking public comment, NEPA requires that all flood control alternatives--including two-lake, levee and do-nothing plans--be considered.

Jackson Mayor Harvey Johnson Jr. called the occasion a big day for the city and the region. Johnson, who had been skeptical about the McGowan group's two-lake plan, added that his administration is 100 percent on board the one lake idea, which also offers the potential for economic and recreational development in the city.

"We've been, for many years, trying to push forward this notion of flood protection for our region, and this is a big step forward in that direction," Johnson said.