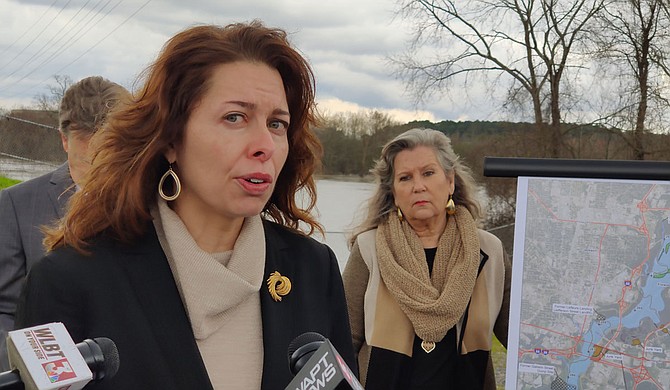 The Rankin Hinds Pearl River Flood & Drainage Control District, called the Levee Board, is confident that the "One Lake" project will address flood control in Jackson. But environmentalists, including Jill Mastrototaro, left, policy director for Audubon Mississippi, gathered in front of the Pearl with a presentation challenging their certainty. Mayor of Monticello, Miss., Martha Watts, right, joined them, sharing her fears of downstream effects on local industry. Photo by Nick Judin

The "One Lake" flood-control plan is enjoying a headwind of support from the Rankin Hinds Pearl River Flood & Drainage Control District, also called the Levee Board, and the Hinds County Board of Supervisors. But environmentalists are sounding alarms over concerns that the Levee Board is misrepresenting alternative solutions to Jackson's flooding woes in favor of lucrative property-development opportunities.

"The proponents of the One Lake Project have taken advantage of the current sad state of affairs that many people in the metro Jackson area have experienced," Jill Mastrototaro, policy director for Audubon Mississippi, said at a press conference on Lakeland Drive Wednesday afternoon. Behind her, icy rain pelted the still-high waters of the Pearl River as it flowed beneath the roadway.

Representatives from several environmentalist groups gave the presentation Wednesday, illustrating what they say are the unanswered and ignored questions still facing the One Lake project. Most notable was Mastrototaro's assertion that the Levee Board's proposed solutions fatally misrepresented the cost of one of the included options: the voluntary buyout plan. "What they did was assume a 100% buyout of every structure in the 100-year floodplain. Which is why that alternative became $2 billion," Mastrototaro said.

Blindly purchasing every building in the floodplain's footprint is not how a buyout option would work, the Audubon policy director explained. Rather, a multi-step assessment would identify buildings that construction could reinforce, raise or build upon to take them out of the range of floodwaters. And conservation could convert many areas in the floodplain into wetlands, absorbing additional runoff in flood events. 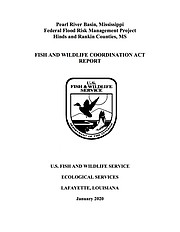 A realistic buyout plan involves "a strategic, targeted focus based on need. In most cases, these nonstructural projects we're talking about are done with other projects that (mitigate) flood risk," Mastrototaro said.

Mastrototaro pointed to recent initiatives and studies arguing for the cost effectiveness of nature-based solutions to flooding. The Meramec Greenway in St. Louis County, Mo., used floodplain acquisition to protect 2,180 acres of the river's footprint, preventing $8.5 million in annual flood damages and increasing property values by slightly over $26 million, compared to an annual opportunity cost of $19 million. In Chicago, New York and across the Gulf Coast, natural infrastructure restored wetlands and floodplains rather than destroying them, achieving flood control without the risk of environmental hazard in the project area and elsewhere, she explained.

Levee Board attorney Keith Turner rejected the possibility of a combined buyout and restoration plan as a complete solution to Jackson's floods. "We have looked at the variabilities there," he said in an interview with the Jackson Free Press today. As for the Meramec Greenway, "you have to have a situation that lends itself to that. We have physically restrictive conditions. The restrictions that we're working with whether they're geographical or natural prevent us from using greenway to get sufficient flood risk benefits," Turner said.

The opposition to One Lake seized on renewed questions about the project's impact on Jackson's bridges. Last week, the Mississippi Department of Transportation confirmed to the Jackson Free Press that it stood by its December 2018 letter asserting that One Lake would cause the catastrophic failure of nine public bridges by dredging near their foundations, including spans of Interstate 20 and Interstate 55, even as many of the project's surrogates say on social media that the problem as been solved. 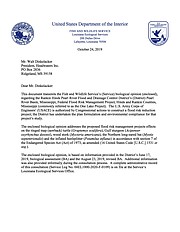 Turner says the Board will address the threat to Jackson's bridges in the near future. "Our engineers are confident that they'll be able to satisfy MDOT's concerns on the bridges without replacing them," he told the Jackson Free Press. "Countermeasures will be put in place to reinforce the bridges during the construction." The cost of these countermeasures, he added, was already reflected in the project budget.

Andrew Whitehurst, water program director of Healthy Gulf, accused the Levee Board of selectively releasing information that favors the "One Lake" proposal while concealing reports that challenge it. "The agency has not updated its website since October. We're not receiving the kind of information to evaluate the plans," he said at Thursday's presentation.

In particular, Whitehurst pointed to two U.S. Fish and Wildlife Service studies. The first paper suggested that the One Lake project would not meaningfully affect sturgeon and turtle populations in the Pearl River. The Levee Board posted the study after its release.

The Board has not yet posted the newer report from the USFWS, which states that the plan violates all five ecological criteria for approval. The report's final assessment of One Lake is rather plain. "By choosing Alternative C, the channel improvement plan, the District has selected the most environmentally damaging alternative of those analyzed in the draft Feasibility Study and Environmental Impact Statement (FS/EIS)," it states.

Turner assured the Jackson Free Press that the Board will post the new report soon, but called it outdated, saying it did not consider the Board's mitigation plan. "The mitigation plan addresses all the environmental issues," Turner said, stressing that "the coordination act report does not change that those threatened species would not be in jeopardy." But for Whitehurst, the report is about more than analysis of individual species: It addresses the impact the One Lake plan could have on the entire riverine ecosystem.

"The Town of Monticello Just Cannot Go Along With It"

Martha Watts, mayor of Monticello, Miss., warned that One Lake represents an existential threat to her town—echoing concerns heard in many places downstream from Jackson all the way to Louisiana. Flow changes threaten paper mills owned by Georgia Pacific and International Paper, businesses that employ well over 1,000 people, she said in an interview with the Jackson Free Press.

"The town of Monticello just cannot go along with it," Watts stated, even as One Lake backers say those concerns have also been solved.

Georgia-Pacific scientists estimated in their own study that the One Lake project's changes to river flow would necessitate $20 million in alterations to keep its plant in Monticello running, Watts said. Watts fears that with the paper industry's increasingly slim profit margins, that price tag could shutter the plant.

Georgia-Pacific contributes between $5 million to $10 million in taxes to the town of Monticello every year, plus substantial charitable donations. "We can't lose that, or we're not here any longer," Watts said.

Turner called threats to the river's flow and downstream industry "completely false," saying he is unaware of any such study. Georgia-Pacific did not respond to requests for comment before press time, but the Jackson Free Press obtained excerpts from its Georgia-Pacific study, including:

"As stated above, Georgia-Pacific has concerns that this project may impact our Monticello Mill operations in the following ways: The possibility for increased river water temperatures at the mill site; Lowered dissolved oxygen (DO) levels; Impact on downstream flows and low-flow conditions due to increased evaporation.

Any changes to the three items listed above, as a result of this project, could cost out Monticello Containerboard operations millions of dollars in terms of capital spend and ongoing expenses.

We believe the project would benefit from a much-needed U.S. Army Corps of Engineers study on downstream impacts."