Flowood Mayor: 'One Lake' Project Will Protect Hospitals from Flooding 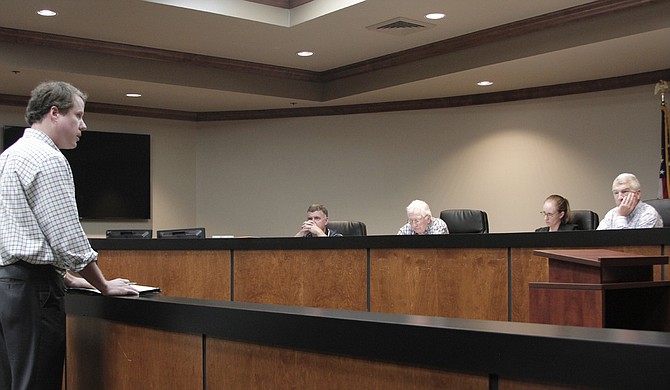 Pearl River Vision Foundation representative Dallas Quinn outlines the next steps in the One Lake project, including meetings with Rankin and Hinds County supervisors, to the Levee Board Monday. Photo by Tim Summers Jr..

JACKSON — Flowood Mayor Gary Rhoads supports the "One Lake" plan to widen the Pearl River to protect the hospitals that sit in Rankin County's floodplain, he said today.

"Everybody is excited about it because of the potential for such devastation in the City of Flowood. We have four hospitals over here that are subject to flooding: River Oaks, Woman's, Brentwood Behavioral. Methodist Rehab," Rhoads said at today's meeting of the Rankin-Hinds Pearl River Flood and Drainage Control District board, commonly called the Levee Board. "... It would protect four hospitals and a lot on both sides of the river."

The Levee Board includes the mayors of Pearl, Flowood and Jackson as well as representatives from Rankin and Hinds County.

The proposed "One Lake" project would widen the Pearl River south of the Ross Barnett Reservoir to down below Jackson to increase the capacity of the river in times of flooding. The project, spearheaded by the nonprofit Pearl River Vision Foundation, is the latest attempt to alter the flow of the river since the failure of the "Two Lakes" project a few years back. Concerns about costs, environmental effects, eminent domain and potential conflicts of interest of Levee Board members then halted the project.

Dallas Quinn, a representative of the Pearl River Vision Foundation, updated the board during the meeting of the project's progress, including a meeting he had that same day with the U.S. Corps of Engineers in Vicksburg. The Corps' approval of the project is key to securing federal funds to pay for the almost $300-million plan.

Quinn said he would spend the next month meeting with members of the various governing bodies.

"We want to talk to the board of supervisors in Hinds County and Rankin County," Quinn said, adding that the governing bodies in the area must get to ask questions before the project moves forward.

But the project does not affect Hinds and Rankin alone, and as the river flows down the state, so does the potential for problems.

"I will be going to the coast, meeting with concerned residents and citizens down there," Quinn said. "As you know there have been several articles put out that we will have to be discussing and kind of making sure that our facts are out there on impacts downstream and what our report reflects, and we believe strongly is that there will be no negative impacts downstream."

"So we need to make sure that we go about letting the agencies and the governmental groups on the coast know that as well, and as well as St. Tammany's Parish," Quinn said.

The JFP reported in October that a study by parish engineers in St. Tammany's found that the pooling of the river into a 1,500-acre lake, as proposed, would cause an increase in evaporation resulting in a reduction of flow of an estimated 90 cubic feet per second. That sort of change in flow downriver could affect the ecology of the lower delta region of the Pearl River.

Quinn said public meetings would be scheduled before the plan moves forward, one in Jackson and another downstream, although the foundation has not set the days, yet.