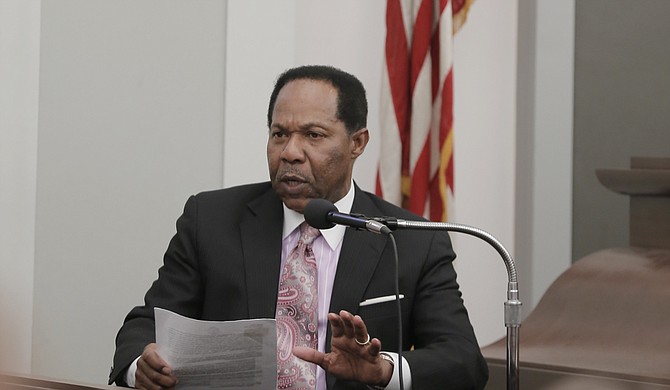 Downtown Jackson Partners attorney Robert Gibbs testified this morning as the second witness for the defense in the trial of DJP President Ben Allen for alleged embezzlement of public funds. Photo by Imani Khayyam.

JACKSON — Robert Gibbs, the attorney for Downtown Jackson Partners, took the stand this morning in the trial of DJP President Ben Allen in the same courtroom where he presided as a Hinds County circuit judge for more then seven years.

Gibbs, although he admitted he was "by no means" a tax attorney, testified today about the Business Improvement District Act that created the DJP, stating that the assessment the BID receives was not a tax levy.

"In my opinion, this is not a tax," Gibbs said.

Gibbs said the assessment is different on a fundamental level from broader taxes determined and levied through larger legislative structures because it came from a decision private business people made.

"A tax is something that a government levies on its citizens, and it is for betterment of the entire citizenry," Gibbs said. "The government had absolutely nothing to do with the assessment besides collecting."

This question of whether the monies that DJP receives as a result of the state legislation is public money hangs heavy over the proceedings. Allen is charged with 10 counts of embezzlement, eight of which allege he misused public funds for his own use to pay cell-phone and credit-card bills in addition to improperly taking possession of a 1998 Chevy Silverado truck.

How the jury determines the public/private status of the funds under DJP control could be the central issue of the case.

The prosecution called Melissa Patterson, a special assistant attorney general who investigated the case for the State Auditor's Office, earlier in the week. She testified that she had determined that DJP's co-mingling of assessment funds and the private money made all the funds public.

"It's my opinion, the funds coming from the state, the tax collector and the City of Jackson are public funds," Patterson said Jan. 31, comparing the funds to those kept in trusts.

The defense put Gibbs on the stand as the foil to Patterson's conclusions, and he said he disagreed that the state auditor had authority to investigate what DJP considers a "private nonprofit" at all. He said state statute limits the scope of the office to public entities, except for a few exceptions, none of which he believes includes DJP.

"In my opinion, DJP was not in the scope of the auditor's authority," Gibbs told the jury. "I disagreed and still do today."

Defense attorney Merrida Coxwell took the opportunity to ask Gibbs, over and over, whether the city or county were able to influence the decisions of the DJP and whether or not the organization required input from public or governmental agencies for its decisions. Repeatedly, Gibbs argued that DJP was a private organization that did not need governmental approval for its decisions.

Gibbs took special pains to separate the legislation that created the assessment that DJP receives from the nonprofit that managed it.

"DJP is not the BID," Gibbs told the jury. "It is a private nonprofit corporation that manages the BID."

Gibbs agreed when Coxwell asked him if voters—property owners within the BID's 66-block footprint—could have selected a similar organization such as Greater Jackson Chamber Partnership during the election to manage the assessment.

The prosecution, with Hinds County District Attorney Robert Shuler Smith leading, has not cross-examined Gibbs as this goes to press mid-day Friday.

Yesterday, after the state rested their case, the court heard the testimony of longtime DJP board member and local real-estate developer Mike Peters, who testified to the process of approval of expenditures.

The developer said he could not recall any of the specific approvals of expenses but that he did remember transferring the truck. Smith asked him about a number of interior-design expenses from a company called Mosaic, which Peters said his daughter-in-law owns. Peters said DJP hired Mosaic to when it built its marketing center.

Peters could not comment as to the nonprofit status of the organization. "I don't know anything about that," Peters said.

The trial will continue throughout the day.