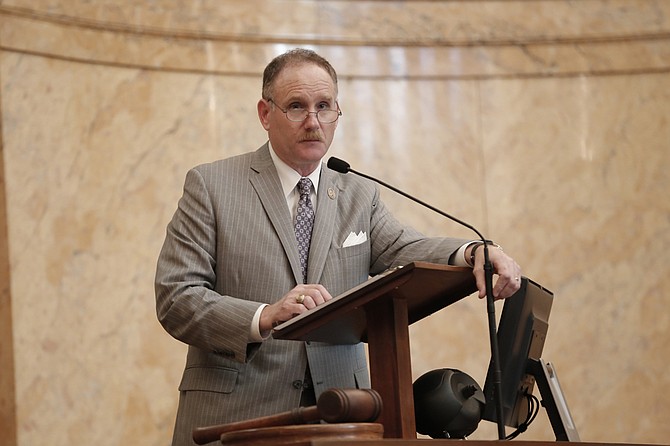 Rep. Mark Baker, R-Brandon, led the way on new property taxes to help for the “One Lake” project. Photo by Imani Khayyam.

JACKSON — Previous plans to dramatically remake the portion of the Pearl River that flows through the Jackson metropolitan area ran aground, but legislation is sailing toward the governor's desk that would pay for the project by taxing selected property in the new "One Lake" footprint.

The project would rely on a mix of federal funds, state bonds and taxes from local property owners set to benefit financially from the ambitious development project. The U.S. Congress, helped by Mississippi representatives, recently earmarked $150 million for "One Lake" as part of the long-delayed Water Resources Development Act of 2016, passed in December, and U.S. Sen. Thad Cochran may procure up to $250 million for it, Sen. Dean Kirby, R-Pearl, told the Senate Tuesday.

Project advocates want some land owners within the footprint to help provide the other $50 million to $150 million to pay for the $300 million project if and once the U.S. Army Corps of Engineers approves it.

The Mississippi House first embraced the plan this session, passing a specially tailored House Bill 1585 by a vote of 110-4, which included every member of the Hinds and Rankin county delegations. The Senate voted March 13 to pass the House bill. If signed into law, the legislation allows a "flood or drainage control project" to levy "a special tax upon all the taxable property within such district" that the board of directors of said district determines "is so benefited" by said project.

That means that HB 1585 would allow the Rankin-Hinds Pearl River Flood and Drainage Control District, commonly called the Levee Board, to decide which land within the district would financially benefit from "One Lake" development and then levy a "special improvement assessment" on those property owners. The funds, which county tax collectors would collect under threats of property liens, would help pay for building, operating and maintaining the project, including principal and interest on any necessary state bonds needed for the project on or before Labor Day each September, the legislation says.

The Levee Board would "determine, order and levy" the tax installments annually, starting July 2, 2017. "This is a levee board, so those within the 'levy' district pay that levy," co-author Rep. Mark Baker, a Brandon Republican, told the House on Feb. 21.

Sen. Kirby told his chamber Wednesday that the plan to dredge and widen the Pearl River would create 1,000 new acres of valuable waterfront property that will be commercial, residential and recreational. He also promised that it would remove 850 existing homes and 418 businesses from the threat of an event like the Easter Flood of 1979. "Those properties will not have to buy flood insurance ... or not as much," Kirby said.

"Property values will go up; it's a win-win in my opinion all the way around," he added.

Sen. John Horhn, a Jackson Democrat who is also running for mayor, told the Jackson Free Press recently that he is excited about "One Lake" because "it can help to make Jackson a real destination"—a sentiment that Mayor Tony Yarber, who now sits on the Levee Board, shares.

Baker promised on the House floor that "One Lake" would be "the crown jewel of Jackson when it's built." It also stands to benefit communities on the east side of the Pearl with potential flood relief and increased property values, including Flowood, Brandon and Pearl, and present and future development on the west side of the lucrative Jackson airport footprint.

"One Lake" is the latest version of the long-time dream of oil wildcatter John McGowan to dam the Pearl around Jackson, promising to provide needed flood mitigation while creating valuable lakefront property that could contribute to local economic development. The idea has long excited many people, especially those who bought land and built in the flood plain in recent decades and have the most to lose in a catastrophic flood.

Earlier versions called for two different lakes and miles of lucrative waterfront property, much of it private, both above and below Lakeland Drive and even two developed islands in the middle. The latest plan is to move a weir (low dam) on the Pearl River south of Interstate 20 slightly to the southeast of the end of McDowell Road in order to allow the river to widen and deepen to become a lake. Its footprint still extends above Lakeland near property McGowan's family owns.

The Lakes Plan That Won't Recede 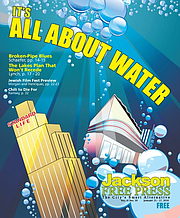 The JFP's 2010 investigation of the "Two Lakes" plan, including who would benefit.

Last fall, Flowood Mayor Gary Rhoads, who sits on the Levee Board alongside mayors from Jackson and nearby Rankin County towns, said "One Lake" would help protect the facilities in the medical district that sits in the floodplain on the east side of the Pearl. "Everybody is excited about it because of the potential for such devastation in the City of Flowood. We have four hospitals over here that are subject to flooding: River Oaks, Woman's, Brentwood Behavioral. Methodist Rehab," Rhoads said then.

Previous versions of the lake plans drew criticism on multiple fronts, from its viability as reliable flood relief, to its high (and under-estimated, some believed) price tag, to the need for government eminent domain to take property, to negative environmental impacts.

Rep. Ken Morgan, R-Morgantown, pointed out on the House floor recently that the lake plan is purposely painted as "a real pretty picture" that may not tell the whole story of what is to come.

In return, Baker acknowledged that earlier lake plans had caused several knock-down, drag-out fights, but said HB 1585 had grown out of impressive current cooperation. "There have been more discussions and public hearings and involvement and cooperation between Hinds County and Rankin County and Flowood and Pearl ... and if you want to look at how a family gets along, 1585 is it," he said.

Some of those earlier fights involved potential conflicts of interest. The Jackson Free Press revealed in 2010 that some of the project's promoters and members of the Levee Board, or their families or business partners, owned property within the footprint that could increase in value. At the time, those potential conflicts had not been disclosed—nor were contributions by McGowan and his partners to a supportive mayoral candidate through a political action committee until the last hour. The "Two Lakes" plan was later scrapped with the scaled-back "One Lake" version eventually placing it.

McGowan told the Jackson Free Press in the early stages of the new plan that he had divested his holdings within the footprint. He and others formed the nonprofit Pearl River Vision Foundation that has driven the efforts behind and design of the new plan and that they argue mitigates any conflict-of-interest concerns today.

The environmental impacts of such an undertaking, which McGowan downplayed in earlier years of pushing his lake plans, are now more front and center in the planning. In recent years, the foundation has spent considerable time researching the plan's effect on the environment, in no small part to try to avoid lawsuits that could delay the project for years. The U.S. Army Corps of Engineers, as well as an independent engineering firm, still must approve the project before it moves ahead.

The elephant in the room, though, for the lake project is still lurking downstream. Those who live and work near the Pearl River further south have long been concerned that slowing the flow of the Pearl would affect the environment and wildlife, including the salinity of the water in the marshlands where the river meets the Gulf of Mexico.   That is, despite a Kumbaya approach to the current tax bill, the Jackson metro does not own the Pearl River—meaning that the Levee Board could face lawsuits for years before the project comes to fruition.

Read more on the lake(s) saga at jfp.ms/pearlriver. Additional reporting from the Mississippi Legislature by Arielle Dreher.