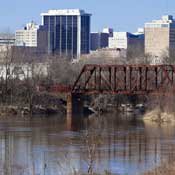 McGowan Working Partners wants the U.S. Army Corps of Engineers to approve its plan to create a lake along the Pearl River.

A Jackson oilman who has long lobbied for ambitious development along the Pearl River in Jackson is hoping that the U.S. Corps of Engineers will give at least an initial nod to his latest lake plan this Thursday at a meeting in Vicksburg.

In an interview in his office this morning after the July Levee Board meeting in Flowood, McGowan Working Partners President John McGowan and several business associates said they hope the meeting with the Corps--with whom they've had a sometimes-contentious relationship--would result in an understanding of their newest plan to mitigate the effects of flooding along the Pearl River, as well as create attractive development property along the east side of Jackson and the west side of Rankin County starting just above Lakeland Drive.

"We'll outline what the initial scope of work is, how to move forward, a timetable ... hopefully we can expedite that," McGowan spokesman Dallas Quinn said today.

In April, the Two Lakes Foundation--set up by McGowan and other supporters of his original vision--changed its name to the Pearl River Vision Foundation. The Levee Board, also known as the Rankin-Hinds Pearl River Flood and Drainage Control District--then entered into an agreement with the foundation to help design a suitable flood-control/lake project. Today, the Levee Board approved a resolution to communicate to the Corps that it is ready to move ahead with the foundation's plan.

Around their conference table, the men explained their latest vision for a "one lake" plan starting just above Lakeland Drive and extending south of downtown. Using a four-color map blowup, McGowan explained the latest version, which he and partners developed in the last year after the Levee Board rejected his long-time vision of a Two Lakes project that would have started at the reservoir and created miles of lakefront property for development. McGowan says the earlier plan would have provided a much higher level of flood protection than the more standard levee-expansion plan that the Corps preferred in addition to many miles of prime lakefront real estate for development.

The Two Lakes plan was controversial, though, because it would have flooded Mayes Lake, destroyed numerous wetlands and promised to be tied up in environmental lawsuits for years, should the Levee Board have embraced it as a locally preferred flooding solution over a levee expansion. The Corps also warned the plan was likely prohibitively expensive, citing much higher costs than the amount McGowan promised he could do it for.

According to McGowan's map, his compromise lake plan essentially cuts off the top half of the Two Lakes plan and leaves areas such as Mayes Lake and its surrounding park land in place, although it would recommend flooding parts of the golf course at LeFleur's Bluff, as well as relocating some hiking trails, he said. It would also require reworking current levees into what he called "super levees," meaning they would be widened so that they would be "wide enough to develop on," McGowan explained.

"We would have to backfill those levees--widen the width--but we don't take away any of the height of the levees," Quinn said. He added that the super levees would not affect the creeks running off the Pearl.

"We'll lower the water levels enough so that you don't have to levee the creeks off," said McGowan partner Mart Lamar. He added: "That's the beauty of this lake. Instead of levees raising water levels and the creeks back up and you get flooding due to that, this thing lowers water levels to where the creeks don't back up."

The men emphasized that they see no compromise solution between their new lake plan and the new levees that the Corps endorsed last year. They also confirmed earlier statements that the one-lake solution would not interfere with any later efforts to add back the second lake north of Lakeland to re-create the original Two Lakes plan, should that idea regain momentum at some point.

The one-lake plan, as McGowan envisions it, would provide some additional river access to homeowners with property that would have benefitted from the earlier plan, however, including some McGowan family members and business associates, they explained. McGowan pointed on the map to small river inlets, or "slews" as he called them, that would receive additional water flow under the current plan, thus creating places near homes and property for boat ramps and for direct access to the river. Thus, the men said, homeowners in the area would see additional benefit from the new plan.

McGowan brought up potential conflict-of-interest questions involving him, his family and his business associates, perhaps because the Corps recently put the conflict-of-interest question on the table, as did the Jackson Free Press a year ago. (Read the JFP story about the recent conflict-of-interests concerns.) He volunteered that he owns a large tract of property, called the Fairgrounds Development Company, LLC, near the state fairgrounds. He has put that land in trust, he says, and has promised to donate it to the Levee Board, should they agree to his plan. His family does not own other property in the new one-lake footprint, he said, although he conceded that his office building at 1837 Crane Ridge Drive would enjoy a higher water level along its back deck than it currently does.

He added, however, that he does not believe that his business associates at McGowan Working Partners should have to give away their property in the new footprint. The largesse should stop with him.

"My partners in the business own little pieces of land here and there, up and down through there. We said that's enough. I'll give them the finest piece of land in the whole project; that's all I have. ... That's where we draw the line."

McGowan explained that the newest idea would require the Levee Board to use its eminent-domain powers. It would have needed to under the Two Lakes plan as well. "More than likely, you're going to condemn this plan and make it a public project. When you do, everything that anybody that my group owns is going to go with it. What you pay them and how you treat them relevant to anyone else in the project is up to you. It's our duty to tell you everything we have," he said.

The Levee Board then could choose to lease or sell the acquired property to developers, he added.

"If the board does decide to condemn, to acquire this property then the property owners will all be compensated at an equal and fair value," Quinn said, adding that the Levee Board would have to ensure that no property owner held out for "an unreasonable amount of money." He said he didn't expect any major problems for the government's purchase of the property, but McGowan said that there will probably be some holdouts, as there usually is with eminent domain.

"I imagine as far as getting all this land, you're going to have 5 percent who don't want to do anything," McGowan said.

At the Corps meeting Thursday, which at least one member of the Levee Board will attend, along with representatives from the new foundation, the Corps is expected to discuss a conflict-of-interest policy it asked the Levee Board to write. McGowan said today that he had provided a list of any potential conflicts of him, his family and his partners to the Corps.

At the Levee Board meeting this morning, board member Socrates Garrett expressed concern that language in the policy concerning what contractor should perform services on behalf of the Levee Board should be revisited. Garrett was a strong supporter of the initial Two Lakes project.

Quinn reiterated a point made at the Levee Board meeting, maintaining that the conflict-of-interest policy, as drafted, was more than the law required.

Watch the Jackson Free Press for a more detailed analysis of the one-lake plan. Read more in the JFP's Pearl River archive.

I'm making a slight tweak in the story above. Mr. McGowan's property that he said he put into trust is called: FAIRGROUNDS DEVELOPMENT COMPANY, LLC, not Fairgrounds Development Corp. as I originally said above.