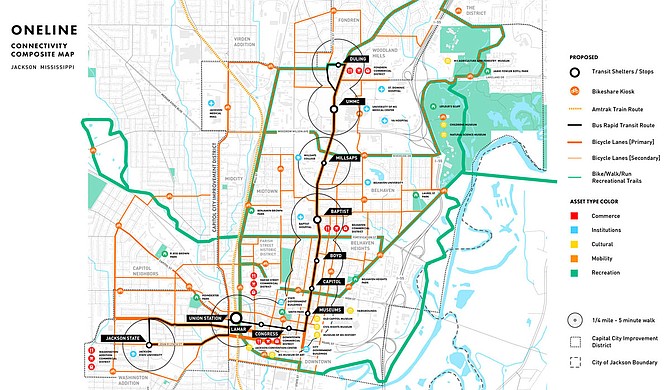 The Federal Transit Administration awarded the City of Jackson $1 million to plan a transportation-focused corridor connecting 20 square miles stretching from Fondren to downtown to west Jackson near Jackson State University. Photo courtesy City of Jackson Photo by City of Jackson

JACKSON — The Federal Transit Administration awarded the City of Jackson $1 million to plan a transportation-focused corridor connecting 20 square miles. The corridor will bring multi-modal transportation options along a route stretching from Fondren to downtown Jackson, then turning west and heading out to Jackson State University.

The Department of Planning and Development calls this initiative the ONELINE project, which focuses on reviving an area with new infrastructure for pedestrians, bicycles, scooters and a better bus system specifically in the region of Jackson that hosts the highest employment concentration in the state.

About 60,000 people work in this part of Jackson at universities, medical centers and various government offices, and around 48,000 live in adjacent neighborhoods. However, only 1 percent of those people commute to work on public transportation. Another 2 percent walk to work and 90 percent commute in their own cars.

Mukesh Kumar, the City's planning director, sees transportation as a service Jackson should offer to its residents and visitors that will be the backbone of the city, not just a last resort.

"Instead of thinking that we would be able to improve one particular mode of transportation ... we can make a major step forward into planning the mobility system for the entire city," he said at a Jan. 7 press conference announcing the grant and project.

Kumar says he is thrilled to execute this work under Mayor Chokwe Antar Lumumba, whom he referred to as "refreshing" in his desire to revive the transportation system in Jackson for holistic impact.

"As we venture to address the issues of poverty and be the radical city that we speak of, we must necessarily address the issue of transportation," Lumumba said at the announcement. He also thanked Scott Crawford, a longtime disability and transportation advocate, for his work with the early planning stages of ONELINE.

Kumar said that Jacksonians can expect to see major changes to the corridor by August.

This grant comes as the City works to reconfigure and modernize its bus system, JATRAN. Kumar said both a request for proposals to develop new bus shelters and develop a bus-route study are forthcoming.

JATRAN has been under a new three-year contract with Transdev as of Jan. 1, 2019, for $6.7 million in the first year, a cost that will increase up to $7.3 million in 2021. This company replaced National Express Transit Service Corp.