JATRAN Getting New Small Buses and Vans, But Problems Linger 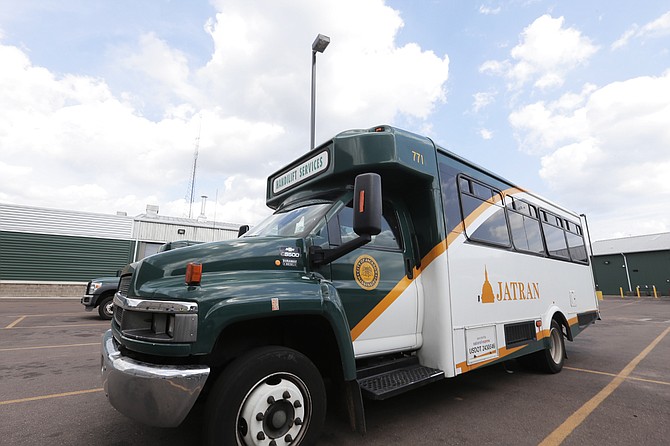 The Jackson City Council approved eight new ADA-approved vehicles for JATRAN between May and June 2018, but because they are not full-size, they will not fix the bus shortage. Photo by Imani Khayyam.

JACKSON — Officials in the City of Jackson are taking steps to revive a crumbling bus system with a series of new purchases and a multi-million-dollar grant application. Still, the City must clear more hurdles to have a fully functioning JATRAN system.

In the last month, the City of Jackson has used matching funds from the Federal Transportation Administration to buy eight new JATRAN vehicles that meet Americans with Disabilities requirements. Half are ADA-accessible minivans, and the other four are 18-passenger low-floor ADA-accessible vans.

The new purchases do not include full-sized buses to shore up the shortage of fixed-route buses. This concerns Scott Crawford, a wheelchair user who leads the HandiLift Advisory Committee for JATRAN. He said during public comments at the June 5 City Council meeting that JATRAN has 10 functioning fixed-route buses, although the City needs 20. The new eight vehicles are too small to run the system-wide routes.

"This is a moral issue, and our collective honor is at stake," Crawford said.  However, if the City gets a highly competitive $6-million grant from the FTA, it could get four new fixed-route buses with only a 15-percent match, or $900,000, from the City. The FTA would take care of the rest.

Citizens and council members alike are also concerned about the overall condition of the routes, especially for people who depend on public transit to travel to the doctor.

At a Jackson City Council work session on June 4, Director of Planning and Development Mukesh Kumar said that as the operations contract between the City of Jackson and U.K.-based National Express Transit Services comes to a close, he expects to send out a request for proposals in July and to extend the existing operations contract until the RFP process is complete so that the City can work on much-needed transportation updates.

"We're not going to have a great City of Jackson if we don't have great JATRAN," Kumar said then.

"Folks can't get to the doctor because so many of the doctors have moved to Flowood and Rankin County and other places that the buses don't go," he said. "So we've got folks who are basically denied access to health care...."

"Three years ago, my primary-care physician moved out on Lakeland (Drive), and I had to get a new provider that's on the JATRAN route," she said during the June 5 council meeting.

Gladys Bunzy, president of the JATRAN fixed-route committee, told the council that she has to leave her house two hours early to have a chance of getting to her appointment on time "with all the breakdowns and the running behind that has been going on forever and a day."