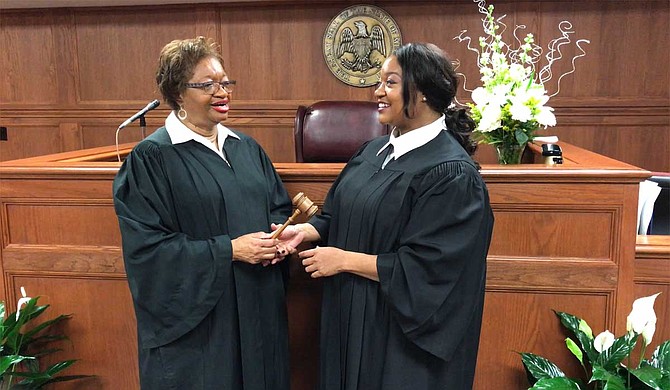 JACKSON — Retired Judge Patricia Wise, who served as a Hinds County Chancery Court judge for nearly 30 years up until 2018, feared she would be too nervous to deliver the closing remarks at her daughter's swearing-in ceremony. So, she asked Senior Circuit Court Judge Tomie Green to do it instead. Wise passed the gavel to her daughter, Crystal Wise Martin, on Jan. 2. at an elaborate investiture ceremony that featured a serenade from an opera singer and a chilling tribute from a young, professional violinist.

Throughout the event, Wise sat at the front of the courtroom, where lawyers typically sit when presenting a case, except she faced the crowd. She frequently nudged her glasses toward the bridge of her nose as she dabbed the corners of her eyes.

Martin had come a long way to get to this moment and continue the legacy her mother began three decades ago.

"I just can't express it in words," Martin told the Jackson Free Press. "I feel as though I have a huge responsibility to the people who came before me. I know that they made tremendous sacrifice in order for me to have an opportunity to be here today."

Martin takes the bench as one of 40 new judges ushering in a breath of fresh air to courtrooms statewide.

The decor in courtroom 3 was a reminder of just how far Mississippi benches have come. Portraits of gray-haired white men lined the wooden walls in the room where Martin was took her oath in the company of the master of ceremonies, Judge Denise Owens, who came to the chancery bench with Wise in 1989; Tiffany Grove, who officially joined the chancery court hours after Martin; and Hinds County Chancery Court Judge Dewayne Thomas. Three women and one man now comprise the chancery court.

Martin said her mother's plight expanded her dreams. She recalled the 1989 swearing-in ceremony of Wise and Judge Denise Owens to the chancery court. Back then, Martin was a self-described nerdy, quiet girl in Jackson Public Schools who loved math.

"At that point in time, I had no idea that an African American woman could be sworn in as a judge," Martin said in her remarks after taking the oath  for the first time.

At first, Martin was not preparing for a life in the courthouse. At Spelman College and Georgia Tech, she studied chemistry and chemical engineering. But at the last minute, bending to her deep spiritual senses during the mid 1990s, she applied to law school and got in. In 1998, she graduated from the University of Mississippi School of Law as a licensed attorney with a winning case secured.

"Judge Martin is uniquely suited by background, experience and temperament for the role of the judiciary," said Patricia Bennett, dean of the Mississippi College School of Law.

Martin's career took her from several law firms to various jobs with Hinds County such as attorney for the board of supervisors and assistant county  prosecutor.

She returned to private practice as she faced devastating personal loss. In the spring of 2014, her husband, Precious Martin, also an attorney with an eponymous law firm in Jackson, died in an ATV accident. Martin and his son Daniel were riding on a 4-wheeler near their home in Ridgeland, Miss., when he flipped the vehicle.

Without a helmet, Precious hit his head and was pronounced dead at the scene, suffering from blunt-force trauma. His son survived the crash with non-life-threatening injuries.

As she grieved, Martin took over her husband's law firm, Precious Martin and Associates, to carry on his spirit if for  no other reason.

"I hope that my life story helps to encourage other people, as a whole, but women in particular, that anything is possible," she said.

At her ceremony, Martin's staff presented her with a brass-framed photo with a gavel inserted behind the glass. They wiped away tears as they unveiled the gift, relishing a bittersweet moment.

Around the time of Precious Martin's untimely death, Rafael Green found out he was able to shed his title of paralegal and officially become a lawyer. Green said Precious Martin offered him a job two days before he died. Green was uncertain about his future and that of a law firm he loved until Crystal stepped in to take over as the "glue," as Green put it.

"Crystal changed that uncertainty to comfort," Green said. "In that moment I was shown something about Crystal that I grew to learn was just Crystal: Crystal is selfless."

After the ceremony, Martin was on her feet another hour or so, taking so many photos with friends and family that she asked someone to fetch her tennis shoes to exchange with her high-heeled peep-toe pumps. After a while, her four kids came into the small courtroom to take family photos. Daniel hung around, and, as he tried to interject as she spoke with the Jackson Free Press, she shot him a silent warning look that only moms can, and he quickly swallowed his words.

In her remarks, Martin had thanked her kids for their patience as she campaigned and continued to pursue a career, even if that meant other relatives had to step in, or that the kids had to cook dinner for the household, including their mother.

Wise had to make similar sacrifices. She said her husband, Mark, whom she and others referred to as the "Other Wise," had to step up in various ways when she became a judge: preparing dinner, watching the children and combing hair.

"When Judge Owens and I took the bench, they thought it was going to become a feminist, I-hate-men type of organization," Wise told the Jackson Free Press. "Actually, it turned out to be the opposite, because she and I both had strong husbands who didn't define our roles as male-female responsibilities that they were able to do things that were non-traditional."

As Judge Martin picks up the gavel to oversee family matters of all types, among other cases, she hopes that young women and girls feel motivated by the Wise women's legacy.

"I think sometimes in our society, especially as females, we can feel that our roles are limited by what society brings forth," she said. "I want young women especially to know that they can be and do anything that they can imagine and beyond."