Voter ID Stays Under Both Secretary of State Hopefuls, But One Wants Citizenship Check 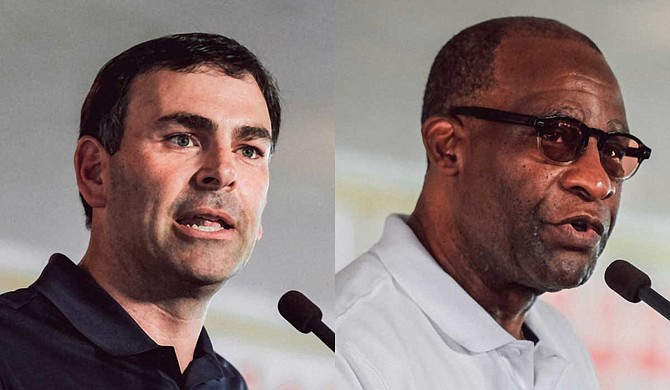 Mississippi Sen. Michael Watson (left), R-Pascagoula, is running against former Hattiesburg Mayor Johnny DuPree (right), a Democrat, for secretary of state. Both would keep voter identification in Mississippi, while Watson would implement an immigration citizenship check. Photos by Ashton Pittman

DuPree wants to take steps to not only increase access and participation at the voting booth, but to expand voter education. Still, in an interview with the Jackson Free Press in August, he said he would keep the current procedures in place for the state's voter-identification system that current Secretary of State Delbert Hosemann, the Republican nominee for lieutenant governor, shepherded into place.

"Well, like I told everybody else, voter ID is the law," DuPree told the Jackson Free Press at the Neshoba County Fair in August. "I like to drive 85 miles-per-hour, but you can't in Mississippi, because that's not the law."

DuPree opposed the 2011 voter ID referendum that led to the current law when he ran for governor that year.

The law requires voters to show a photo ID when going to cast a ballot. Under Hosemann, voters are able to obtain IDs for free if they do not have another acceptable form of ID, such as a driver's license or college ID, at their local circuit clerk's office.

Watson helped draft the 2012 legislation that enacted the referendum's results.

"So being on the front end and understanding why we put those things in there and why we drafted it like we did so the federal government did not sue us, so that we had a good voter ID system in Mississippi—I think it's invaluable to have that experience to take that into the office with you," Watson said.

The Jackson Free Press reported at the time that fraud is more prevalent with mail-in absentee ballots than at the polls, which voter ID does not affect.

'I Think It's a Great System'

Voter ID was a very controversial political wedge issue during the time it passed in Mississippi. It was an open secret that many Republicans believed it was a way for that party to get more votes, and not just as a way to ensure voting legitimacy, which a number of GOP members have admitted openly. Pennsylvania House Majority Leader Mike Turzai said a 2012 speech then-presidential candidate Mitt Romney would carry that state due to voter ID.

"Voter ID, which is going to allow Governor Romney to win the state of Pennsylvania: done," Turzai said when talking on camera about GOP wins in his legislature.

Critics believe it is an intimidation tactic for black voters, who historically faced so many barriers to voting, especially in states like Mississippi. In the earlier part of the decade, the federal government sued several states for voter ID laws that have disenfranchising effects. Watson said Mississippi took steps, like offering free IDs, to lessen the chance that the law would fall under federal scrutiny.

At the time, the Civil Rights Act of 1964's preclearance provision required U.S. Justice Department approval for any changes to voting laws in states like Mississippi with a history of Jim Crow laws meant to disenfranchise African Americans. In 2013, the U.S. Supreme Court struck down that provision of the Civil Rights Act, though, with Chief Justice John Roberts making the dubious assertion that states like Alabama and Mississippi are no more likely to implement discriminatory laws than northern states like Massachusetts.

At the Neshoba County Fair, Watson told the Jackson Free Press that he has no plans to change the law's current implementation.

"No changes as is. Obviously if something comes up later down the road and we need to study other issues that's fine. But as it is right now, I think it's a great system," he said.

Both men said they want to make the campaign- finance system more accountable and easier to search.

"I think it's important that people understand who supports who. And we've actually talked about even more frequent campaign- finance reports," Watson said. "Because if you're in the session or if you're in something else where money could play a factor, people need to see, who is contributing to this person? And could that have an impact on how they vote or not? People deserve that, Mississippians deserve that."

DuPree wants the Legislature to do more to fight dark money in politics.

"That's why voter confidence is down on elections, because of all this dark money and all of these things that people have questions about," he said.

Checking Citizenship of Immigrants Before Voting

Watson does want to make one big change to voting in Mississippi, though. As the Jackson Free Press reported in August, Watson wants to implement a system that requires a citizenship check anytime someone registers to vote.

"What we've said is, listen, you apply the same thing to voting, so when someone comes in to register to vote, you pull that information, you run it through a security database, a flag pops up that says the person may not be a legal immigrant, and you can ask them to come to the office," Watson said.

That is different, he said, from a system Kansas enacted that requires people to show proof of citizenship the moment they register "on the front end." Instead, the secretary of state's office would run a voter's information through a federal database after they submitted their voter application. Mississippi would not be the first to enact a system like that, he said.

"So what Tennessee and other states have done is say, listen, OK, we will not do it on the front end," he said. "But if we do run a security check and something shows they may not be a citizen, then you can request they come in the office."

Watson said his team have studied the idea to ensure it is "constitutional."

"Every vote matters. We want to make sure we get every vote in Mississippi that's legal," he said.

DuPree declined to comment on Watson's citizenship proposal. He did say, though, that losing the 2011 governor's race while running in support of the anti-abortion Personhood Amendment—which Mississippi voters resoundingly defeated year—is part of a valuable lesson he has learned about listening to voters over the years.

"That's a lesson it takes you a long while to learn sometimes," DuPress said, while stressing that abortion issues have "nothing to do" with the secretary of state's job.. "As politicians we all have our thoughts, but you realize over these many years that our goal is to re-present people. Not represent, re-present. To represent their thoughts and desires. And you can't do that if you don't talk to them."

The election for secretary of state and other statewide offices in Mississippi, including governor, is on Tuesday, Nov. 5. Anyone who registered to vote by Oct. 7 is eligible. To cast a ballot, voters must bring a state-accepted form of photo ID.