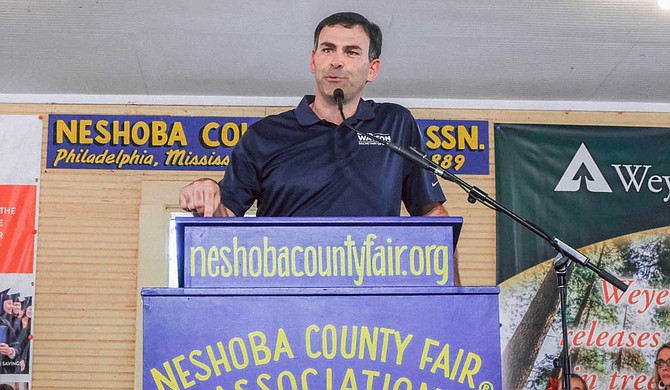 Republican Sen. Michael Watson, who is running in a heated contest against fellow conservative Sam Britton in their party's primary, shared his proposal with a crowd at the Neshoba County Fair on July 31. Photo by Ashton Pittman

PHILADELPHIA, Miss.—If elected, Mississippi Sen. Michael Watson wants to use the secretary of state's office to run background checks on people when they register to vote—and flag people who may not be in the country legally.

The Republican senator, who is running in a heated contest against fellow conservative Sam Britton in their party's primary, shared the proposal with a crowd at the Neshoba County Fair on July 31.

The Jackson Free Press asked Watson if his proposal would involve racial or ethnic profiling.

"I don't think there would be any profiling. It's the same as E-Verify now," Watson said, referring to a federal system that allows employers to check potential employees' immigration status.

"We already have a system that checks Social Security and registration. It's already happening," he said. "So what we said is you apply the same thing to voting, so when someone comes in to register to vote, you pull the information and run it through a security database. If a flag pops up that says a person may not be a legal immigrant, you can ask them to come to the office."

That proposal could be legally tricky. Last year, a judge found a similar Kansas statute that required people to show proof of citizenship before they could register to vote unconstitutional.

Watson's proposed Mississippi system would be different, he said. People could register to vote, but Watson said he would run the background checks afterward—not as a prerequisite to registering.

Watson would not be able to use the federal E-Verify system to check immigration status, Mississippi Immigrants Rights Alliance attorney Patricia Ice told the Jackson Free Press on Aug. 2. Instead, Watson wants to use the state background-check system.

At the fair, Watson told the crowd that the system would "keep illegal immigrants off our voting rolls."

Ice told the Jackson Free Press on Friday that she is not aware of any incidences in which an undocumented immigrant registered to vote in Mississippi.

In 2014, Watson asked a court to invalidate the votes of black Mississippians in that year's Republican Party primaries. When then-incumbent U.S. Sen. Thad Cochran faced a challenge on his right from Tea Party candidate Chris McDaniel, a Mississippi senator, the Cochran campaign asked Democratic-leaning black voters to vote in the GOP primary to help stop McDaniel. McDaniel blamed those crossover votes for a narrow loss.

Watson and others on McDaniel's team claimed that Cochran only won because he asked Democratic voters to vote in the GOP primary, calling it "fraudulent." Under Mississippi law, though, voters do not register under a party and are free to vote in whichever primary they choose. Watson and McDaniel's attempt to invalidate those votes and trigger a new election failed in court.

Voters will choose party nominees in the race for secretary of state on Aug. 6. Anyone who registered by July 8 is eligible to vote, and people can vote in either the Democratic or Republican Party primary.

Democratic and Republican candidates in other races face off that day, too, including candidates in the races for lieutenant governor, attorney general, treasurer, Mississippi House and Senate seats, and more. Those races could go to a runoff on Aug. 27 if there are more than two candidates and none wins more than 50% of the vote.

After voters decide, nominees from both parties will face off in the general election on Nov. 5.

Mississippians must register at least a month before an election in order to be eligible to vote and must show an accepted form of photo ID at the voting booth, a list of which is available on the Secretary of State website. County Circuit Clerks across the state offer all residents free photo IDs that they can use to vote.