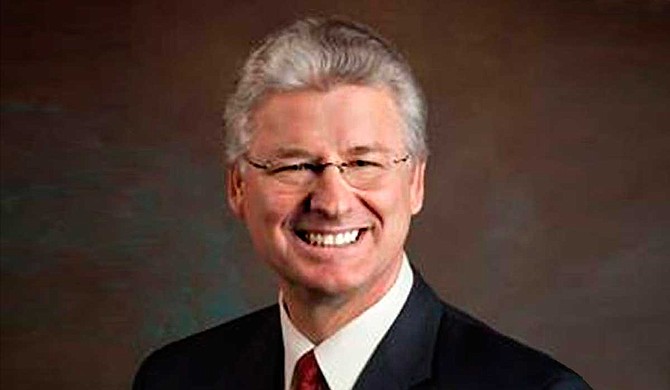 JACKSON — Mississippi Public Service Commissioner Sam Britton promised to "get government out of our lives" on Monday as he launched a bid to become Mississippi's next secretary of state.

The Laurel Republican, who serves as commissioner for the state's Southern District, was one of the first Mississippi Republicans to endorse President Trump during the 2016 GOP presidential primaries.

"I endorsed President Trump early the '16 GOP primary, and I know that he can count on me as a strong ally in Mississippi," Britton said in a statement Monday afternoon.

In the party primary, Britton will face Mississippi Sen. Michael Watson, R-Pascagoula, who announced last August. On Sunday, Republican Gov. Phil Bryant endorsed Watson, calling him "an effective lawmaker" who "will be even better for our state as secretary of state."

As one of the state's top utility regulators, Britton has advocated for expansion of rural broadband access. Last week, the State Legislature sent a bill to the governor's desk designed to help accomplish that goal, though it could be years before rural Mississippians reap the benefits.

In November, Britton challenged the Federal Communications Commission to correct its cell-phone coverage maps for accuracy, after he traveled across South Mississippi trying to make calls. In many places where maps showed coverage, he said, he could not get a signal.

"If they're showing we have more cell-phone service than we really have, we could miss out on federal funding to expand cell-phone coverage in our state," he told the Hattiesburg American. "We want to show the FCC the map is not correct.

"I am a conservative outsider with a proven track record of solving difficult problems," Britton said in Monday's statement. "As a secretary of state, I know that I can help lead the fight to get government out of our lives and focus on policy priorities that will lead to rising incomes for all Mississippians."

Britton, whom Mississippians first elected to his current job in 2015, cited his rural Wayne County roots and the "small-town values" he learned later as a Laurel resident in Jones County.

"Early in life, I learned the value of hard work as a roughneck in the oil fields of Jones County, but I also knew a quality education was equally as important," Britton said. "As a certified CPA and successful small businessman, I have a clear understanding of how to make our government work more like the private sector. President Trump is leading this fight in Washington."

Though Hosemann supports Trump, he rebuked the president's "Commission on Election Integrity" in 2017 after it asked Mississippi to send information on the state's registered voters, including birthdates and Social Security numbers.

"They can go jump in the Gulf of Mexico, and Mississippi is a great state to launch from," Hosemann said in a statement at the time. "Mississippi residents should celebrate Independence Day and our state's right to protect the privacy of our citizens by conducting our own electoral processes."

Former Kansas Secretary of State Kris Kobach, who has worked with Gov. Phil Bryant in an anti-immigration effort, led the election commission. It was searching for "millions" of cases of "voter fraud" that Trump claimed, with no evidence, caused him to lose the popular vote to Hillary Clinton in 2016. The president disbanded the commission in January 2018, as it became mired in lawsuits with states whose leaders, like Hosemann, refused to turn over voter data.

Last September, the Kansas Supreme Court ordered a grand jury be convened to investigate Kobach, who was running for governor at the time, for voter fraud. He lost that race.

At the Neshoba County Fair in August, Hosemann announced he would not run for re-election to his current position in office, but teased plans for higher office. Earlier this month, he joined the race for lieutenant governor. In Mississippi, the lieutenant governor has executive powers and plays a large role in the Legislature as president of the State Senate.

Voter ID Back as Campaign Issue

In a Jan. 22 campaign video, Watson explains to his two young daughters why he is running for secretary of state.

In a Jan. 22 campaign video, Watson explains to his two young daughters why he is running for secretary of state.

"I'll help businesses grow and succeed so children like you can succeed in the future," Watson says.

"Can I vote for you, Daddy?" the youngest daughter asks.

"Not yet," Watson says. "That's why we have laws like voter ID in Mississippi, so only those legally registered to vote can participate in our elections."

The voter ID law Hosemann supported and implemented requires voters to present an accepted form of photo ID at the voting booth. Accepted forms of photo ID include driver's licenses, student IDs, tribal IDs, passports, firearms licenses, and "any other photo ID issued by any branch, department, agency or entity of the United States government or any State government."

Still, eligible voters who do not have any of the forms of IDs listed above can get a free voter-identification card at their local circuit clerk's office, provided their bring proper documentation.

An August 2018 report from the Williams Institute at University of California School of Law identified another potential problem with Mississippi's law: It could disenfranchise transgender people. The UCLA report estimates that 67 percent of the transgender voting age population in Mississippi could be affected.

Candidates for statewide office have until March 1 to qualify for party primaries.