Delbert Hosemann Running for Lt. Gov: 'I'm Here to Apply for the Job' 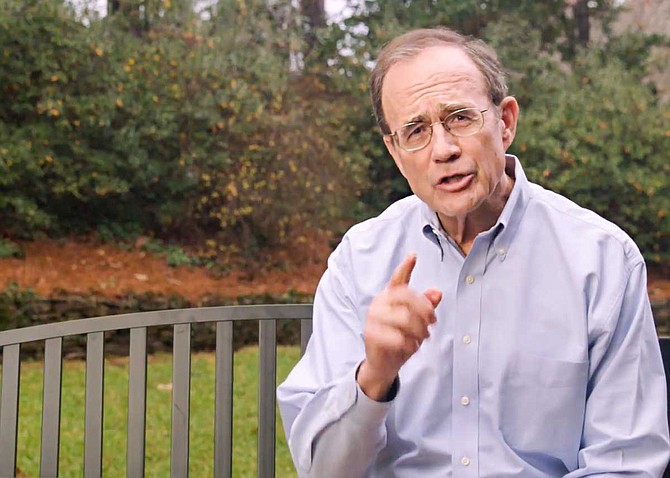 "Hi, it's Delbert, ma'am," Hosemann said, looking directly at the camera in a campaign video published to Facebook shortly after 9 a.m. "When you hired me, I promised you I'd make it easier to run and start a business in Mississippi."

On the Gallo Show on SuperTalk radio, Hosemann said he was proud of his work on business law, his acquisition last year of 18,000 acres in the Delta for public use, an insurance reform bill that required insurers to cover autism treatment, and for working to implement a "fair and constitutional voter ID" law. He also touted the 2016 acquisition of more of Cat Island, which was reacquired more than 200 years after Mississippi relinquished it.

"I just had my seventh grandchild four days ago, and to hold that little baby and ... I thought where is little Howard going to grow up?" Hosemann said on the radio show. "How is his state going to be? Is he going to have the same things he had?"

The Republican leader said he plans to make his campaign stops in Columbus, Tupelo and parts of DeSoto County today. He will travel to Meridian, Hattiesburg and the Gulf Coast on Thursday, and to the Delta and Southwest Mississippi Friday.

Hosemann, who has been secretary of state since 2008, announced that he would not run for secretary of state again at the Neshoba County Fair last August. Gallo asked why he chose to run for lieutenant governor instead of governor.

In some states, the lieutenant governor is sometimes jokingly referred to as a "spare tire," and the position is mostly ceremonial. Not so in Mississippi.

"You have to look at the rules of the game here," Hosemann told Gallo. "In Mississippi, to be frank about it, the lieutenant governor is in the legislative and the executive branch. And they control the budget along with the speaker of the House."

As lieutenant governor, Hosemann said he would have more leverage to move forward an agenda to make Mississippi more business-friendly with a more educated workforce. He said he disagreed with the Legislature's decision to pass a lottery bill last year that did not devote a portion of the funds to education.

Hosemann suggested to Gallo that he might be open to supporting a version of Medicaid expansion in Mississippi. He referred to expansions in Indiana and Arkansas, where he said leaders were "negotiating out some of the onerous things that were put on by Obamacare to look and see if there's a middle ground that would be economic." Medicaid expansion in Indiana requires that poor people contribute to savings accounts; in Arkansas, it includes work requirements.

The Affordable Care Act, signed into law by President Obama in 2010, would have used federal funds to pay for 100 percent of the cost of expanding Medicaid in Mississippi in the first few years, and 90 percent in years after.

Since 2013, Gov. Phil Bryant has refused federal funds to expand the program that would bring coverage to 300,000 Mississippians who make too much to qualify for traditional Medicaid but not enough to buy their own insurance.

"You could turn this into a third-world country, but at least the people on top, as far as the Democrats go, are in power," Gallo suggested.

"Well I don't know about all that, that gets too complicated," Hosemann said. "But I will say this: They would get more members of Congress than they would ordinarily. I'll put it that way."

In the social-media video, Hosemann talks about some of the issues he plans to campaign on.

"We have challenges in Mississippi in jobs, education, healthcare and infrastructure, and our next lieutenant governor will have a significant impact on those," he says. "And I'm here to apply for the job. I'm a conservative. And I care about leaving a better-educated, healthier, and more prosperous Mississippi for our children and our grandchildren."

In a social-media video, Delbert Hosemann talks about some of the issues he plans to campaign on.

He closes out the video with a simple message: "When I make you a promise, I'll keep it."

On the Democratic side, House Rep. Jay Hughes of Oxford has been running for lieutenant governor since last year. His core issue is education funding, evinced by his signature slogan: "It all starts with education."

The voter ID law Hosemann supported and implemented requires voters to present an accepted form of photo ID at the voting booth. Accepted forms of photo ID include driver's licenses, student IDs, tribal IDs, passports, firearms licenses, and "any other photo ID issued by any branch, department, agency or entity of the United States government or any State government."

Still, eligible voters who do not have any of the forms of IDs listed above can get a free voter-identification card at their local circuit clerk's office, provided their bring proper documentation.

After the Brennan Center for Justice at New York University issued a report in 2012 that estimated that voter ID could disenfranchise over 48,000 Mississippians, Hosemann defended the law, calling the report "purposefully inaccurate and misleading."

An August 2018 report from the Williams Institute at University of California School of Law identified another potential problem with Mississippi's law: It could disenfranchise transgender people. The UCLA report estimates that 67 percent of the transgender voting age population in Mississippi could be affected.

The report identified similar hurdles for transgender voters in other states with strict voter ID laws, too. It estimates that 70 percent of Alabama's transgender population could face the same problem.

On Tuesday, appointed State Auditor Shad White announced plans to run for election to the office he currently holds. In an announcement video, he said his priorities include studying how the Mississippi Department of Transportation is spending money on roads and bridges in order identify inefficiencies, continuing "to be aggressive in finding embezzlement and fraud," and launching a cyber security study of state agencies "to keep our state agencies from being hacked."

"It should go without saying that you can't use taxpayers' money to pay your tithe to your church," White said in a press statement at the time. "Elected officials have to use common sense. If you or an organization you belong to is benefitting from your position in the government, and the taxpayers are paying for it, odds are you are doing something wrong. We're going to continue to make sure money like this is repaid to the taxpayers and officials are held responsible."

Petal Mayor Hal Marx dropped out of the Republican race for governor last week to focus on his wife, who is undergoing treatment for cancer.