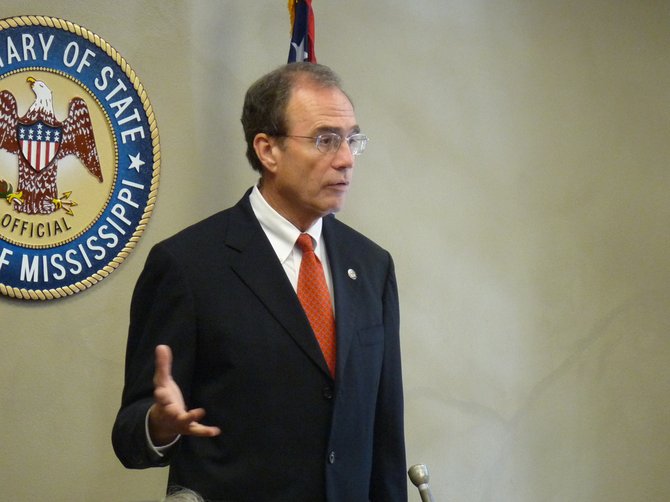 In the report, the Brennan Center identified numerous potential barriers for voters seeking to comply with new Voter ID laws in the 10 states that have passed them.

Among them are the cost of getting supporting documentation such as birth and marriage certificates, and travel distances, lack of transportation and part-time hours of state offices that could issue the Ids.

Hosemann's office called the report "purposely inaccurate and misleading," in a press release. It "exaggerates the population number, then multiplies it by the 'estimated' number of people without transportation, to provide a totally fraudulent number of 48,329 voting citizens without a vehicle more than ten (10) miles from a state ID issuing office. This statement is false and the Brennan Center had knowledge to the contrary when the 'Report' was issued."

Multiple news outlets trumpeted the Brennan Center's 48,000 figure, insinuating the number purported to represent the total number of people who would be disenfranchised by the new law in Mississippi. In reality, the report only said this was an estimate of citizens who lived more than 10 miles from an issuing office who also lacked transportation. Calls to Pamela Weaver, Hosemann's director of communications, were not returned.

The numbers of people who could be disenfranchised are difficult to assess, said Bear Atwood, legal director of the Mississippi ACLU in Jackson. But whether it's 48,000 or 3,000 or three, she asked, how many is "too many" when it comes to denying someone's constitutional right to vote?

In its response to Hosemann's accusations, Lawrence Norden, deputy director of the Democracy Program at the Brennan Center for Justice said that the center and report authors stand by their conclusions. "The Challenge of Obtaining Voter Identification" devotes nearly half its pages to outlining its methodology and citing data sources used. The center obtained population data from the U.S. Census.

Hosemann also took issue with the report saying that half the state's rural offices issuing Ids are open part time.

The Brennan Center used information from the Mississippi Department of Public Safety website list of offices that issue driver's licenses. A scan of the hours listed reveal numerous part-time locations, such as Indianola's Justice Court Building at 202 Main St., which is open "1st & 3rd Thursday, 8:30-4:30 (closed for lunch 12:00-1:00)," according to the website. Kosciusko's office is only open Tuesdays.

The secretary of state the characterization of the "Mississippi 'Catch-22,'" (reported by the Jackson Free Press July 5) whereby a citizen must produce a birth certificate to obtain a Voter ID card, but must have government-issued photo ID to obtain a birth certificate. Hosemann said that "each Circuit Clerk will be able to access the National Association for Public Health Statistics to verify available birth certificate data across the country at no cost to the applicant by simply obtaining basic information from the applicant."

Hosemann's press release was the first Atwood had ever heard of this procedure, she said, adding that part of the problem is that the entire process has yet to be codified or funded, and is filled with unknowns. "There's no way to test the logistics," she said.

"I would want to ask the secretary, 'What's the acceptable number of people to disenfranchise?'" Atwood said. "I think it's zero."