Analysis: Democrats Disappointed for the Children 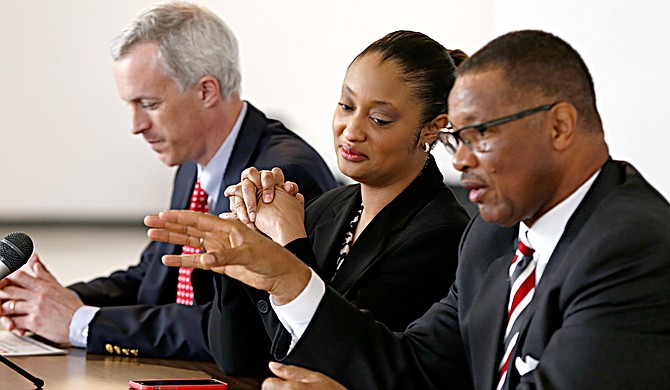 State Democratic lawmakers said this year’s session crystallized their priorities in opposition to the Republican leadership, especially when it came to education of children. Left to right: Sen. David Blount, Rep. Kimberly Campbell and Sen. Sollie Norwood, all of Jackson, spoke at the April 8 Jackson 2000 luncheon at the Arts Center of Mississippi. Photo by Imani Khayyam.

Whether this past session of the Mississippi Legislature was successful depends largely on which party a lawmaker belonged to. For Democrats in a body that is majority Republican in both houses—in a state with only one Democrat in statewide office—the consensus seems to be that every win was a hard-fought scramble.

"For me, personally, it was not a very good legislative session," state Rep. Kimberly Campbell, D-Jackson, said.

"I'm pretty disappointed with a lot of things that happened this session."

Campbell was one of three panelists speaking at a Jackson 2000 luncheon on Wednesday, April 8. She was joined by state Sens. David Blount and Sollie Norwood, also Democrats from Jackson.

Public education took center stage in this year's session, as it often does. In 1997, the state Legislature devised a formula to provide level funding for every school district in Mississippi. Under the formula, districts with poorer residents and lower tax bases would receive more state money to ensure their children would receive at least an adequate education. But since passing the formula, called the Mississippi Adequate Education Program (or MAEP), lawmakers have only allocated enough funds twice, in 2003 and 2007, both election years.

In fact, when school funding is calculated on a per-student basis, as of 2013, Mississippi provided 13 percent less money—or $648 less—for each child in public school than it did in 2008, reports the Center for Budget and Policy Priorities, a Washington, D.C., think tank.

From 2009 through 2015 school years, the cumulative statewide funding shortfall adds up to more than $1.5 billion. For the Jackson Public Schools alone, the district would have received an additional $89.5 million had lawmakers allocated adequate funds through the MAEP formula, enough to hire 320 new teachers, the Mississippi Association of Educators estimates. This year's budget shorts the formula by an additional $200 million.

To date, the decision to allocate enough funds to provide adequate education has been at the discretion of the state Legislature; however, last year a grassroots effort to amend the state constitution resulted in Initiative 42, putting the question to the state's voters in the upcoming November elections. At issue is whether to add enforcement teeth to the formula. In response, lawmakers came up with a competing initiative to enshrine their discretionary status quo.

"Since we've had the initiative process, the Legislature has never exercised this provision to put an alternative on the ballot," Blount said. "And when I say 'the Legislature,' I'm saying 'the party I don't belong to' that did this."

From its inception, public-school advocates said that the Republican initiative's purpose was simply to confuse the issue. Its wording, they said, was too close to Initiative 42, and its aims were unclear.

The conservative alternative was made somewhat less confusing in early April, when Adrian Shipman, a mother of two from Oxford, won her suit to clarify its language. Nonetheless, the process still has the potential to confuse voters. As it stands now, voters will have to cast two votes to change the state constitution.

"First, you can vote yes or no. You can vote against the idea, or you can vote for the idea," Blount said. "If you vote yes, then you're going to have to vote a second time for either ... the people's initiative" or to maintain the system has it today.

"It's about splitting the vote," Blount added.

To make school funding even more difficult, Republicans introduced legislation to eliminate state income taxes, potentially cutting revenues by as much as a third. Democrats, with some Republican help, defeated the measures, but the efforts crystallized priorities, Blount said: Give upper-income Mississippians a few hundred dollars more in their pockets every year or give all of the state's children the opportunity to get a decent education.

"This year made it very, very clear," he said. "Do you want to get to full funding of education? Do you want to do more funding for our community colleges and our universities? Or, would you rather cut taxes?

"We have to balance the budget, so that's the choice we had to make. The leadership in the House proposed eliminating 30 percent of the budget."

The Democrats' education battles extended to the state's public colleges and universities. The announcement by Mississippi Institutes of Higher Learning that it would not renew University of Mississippi Chancellor Dan Jones' contract revealed the IHL's opaque internal machinations. Campbell said she and many others have long had issues with how IHL was run. She has asked the commission to show her how they determine distribution of state funds, for example.

"IHL seems to be their own secret society," Campbell said. "... It's like trying to speak Mandarin. You can't ever get a straight answer from them."

Under the control of the governor, the IHL board currently has no women, and it is about to lose its only representative from the state's seven historically black colleges and universities. The Legislature's education committees largely mirror that mix, making the allocation of state funds problematic for the HBCUs, Campbell said.

"Over half of the students at Valley (State University) are literally still in trailers because they do not have dormitories," she said. "Valley was asking for $14 million, which to our (state) budget, that's really like asking for 14 cents."

The school was willing to split that amount to get half this year and half next.

"The answer was no," Campbell said. "We couldn't give you $7 million to put a roof over students' heads, but we could give $25 million to the Coast for an aquarium. Don't get me wrong, those things are important, too. I'm not someone who thinks arts and dance and aquariums are not important. They are; they're vital to the communities. But you've got to have priorities. I do not think $25 million for an aquarium should have outweighed $7 million to Valley State University to house children."

Campbell said she received calls from her constituents accusing her of paying too much attention to Ole Miss' issues and not enough for the HBCUs when she spoke out against IHL's decision to fire Jones, but she pointed out that she was taking a broader view of the issue to support a man who was committed to diversity.

"If the flagship (university) can be treated like this, then think about how Valley and Alcorn and Jackson State will be treated one day," she said. "... At some point, you have to rally and get behind good people. It's not just because of the school; it's about the man and what he had done."

Sen. Norwood pointed to the defeat of the so-called "Tim Tebow Act" among Democratic educational wins in this year's session. The proposed legislation would have allowed home-schooled children to participate in public-school extracurricular activities.

"We lost on everything else," he said. "... It was a very bad session for education."