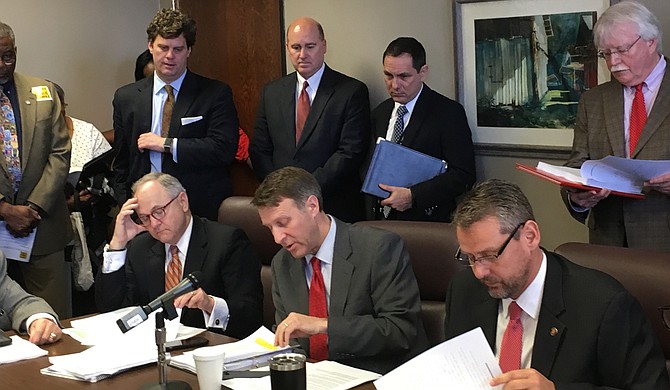 Senators passed House Bill 957 out of the Senate Education Committee on Tuesday, Feb. 27, and Sen. Gray Tollison, R-Oxford, made minor adjustments to the House proposal, including changing how low-income students are defined. Photo by Arielle Dreher.

JACKSON — Update: The Senate killed the UPS funding formula proposal (House Bill 957) this afternoon by a vote of 27-21, with all Democrats and eight Republicans voting to send the measure back to committee, killing the bill.

The push to re-write the State's education-funding formula, the Mississippi Adequate Education Program, is in the Senate waiting on a full vote. On Tuesday, Feb. 27, the Senate Education Committee met to consider House Bill 957.

Sen. Gray Tollison, R-Oxford, introduced the Senate's version of the new funding-formula proposal, with minor tweaks to the House bill. Tollison said his proposal did not address the 27 Percent Rule, a measure that EdBuild staff have said is crucial to ensuring equity in their recommendations. The "27 Percent Rule," which is a current part of MAEP, allows some districts that can afford to pay more to only contribute 27 percent of the total cost to operate its schools. If eliminated, it would free up $119 million in state funds for the new formula. The rule affects predominantly property wealthy districts like Pascagoula and Madison County schools.

The Mississippi Uniform Per Student Funding Formula changes the way the State allocates funds to schools, using weights for specific kinds of students, accounting for high school, low-income, gifted, English-language learner and special-education students. Ultimately, the UPS formula calls for less funding than MAEP when it is fully funded. In January, HB 957 passed through the House after a heated debate, and Republican leaders rejected 17 amendments that Democrats proposed. Ultimately, the measure passed by a vote of 66-54, with some Republicans voting against it.

The Senate version of the UPS formula proposal does change how schools will count low-income students, using an average of U.S. Census poverty data from the past three years instead of just one year like the EdBuild proposal initially suggested. Tollison said this change would direct more funding to low-income students in the state.

"The most significant change in this is to make the poverty definition stronger. The definition of low-income student will now use a rolling average to smooth out changes from year to year," Tollison said. "(It) should increase predictability without diluting the integrity. ... We ran some preliminary numbers, and that would have an increase of $3 million to those students in greatest need." 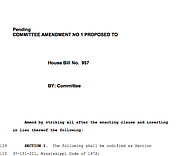 The UPS formula allows a two-year phase-in, which will hold districts that stand to lose money under the new proposal harmless (meaning they won't lose funding for the first two years). Senate revisions to HB 957 clarify that districts that gain students during the period are allowed to receive additional funding. Ultimately, under the UPS formula, 35 districts would lose state funding, compared to current MAEP levels; under a weighted student formula, all districts will lose funds as they lose students, like they do under MAEP.

Republicans say the proposal will ensure predictability for districts to know how much funding they receive from year to year. Democrats have opposed the measure throughout the session, citing a lack of transparency, less funding in total than MAEP and how the proposal cherry-picks the EdBuild recommendations.

"This is what I think is going on. There is a political problem that the people of Mississippi want the MAEP funding formula funded. And this bill is the answer to (the) political problem because this Legislature has made a decision: underfunding the formula," Blount said.

The Senate is in recess until 1 p.m. and is expected to vote on HB 957 today, March 1. If they do not take the measure up today, senators have until next Wednesday to act on the legislation.