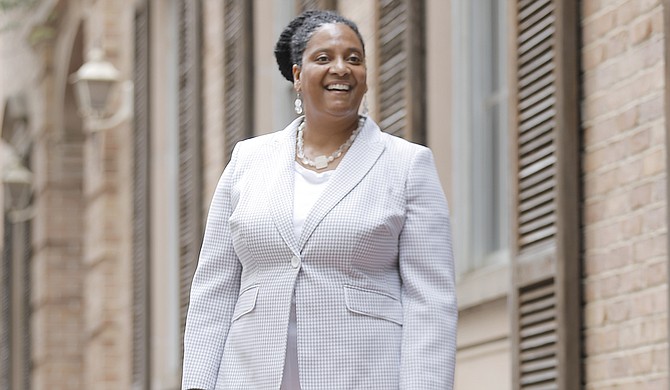 Velesha P. Williams announced that she is running for the Democratic nomination for governor in 2019. Photo by Imani Khayyam.

JACKSON — Next week, Velesha P. Williams plans to officially join the race to become the Democratic Party's gubernatorial nominee, she announced in a Nov. 29 press release.

"As an officer in the United States Army, the core values instilled in me, coupled with my faith in Jesus Christ, has guided me to a successful 30-year career in service to my country, state and community," Williams said in the statement. "I have always felt a duty to serve in obedience to God's purpose in my life. This same call of duty has compelled me to run for governor of the beloved state of Mississippi."

She will face off against Mississippi Attorney General Jim Hood, who announced his own bid for the Democratic nomination for governor in October. Hood has been attorney general since 2003 and is the only statewide-elected Democrat currently holding office.

Williams seemed to take a swipe at Hood in the press release.

"Career politicians have crippled Mississippi's potential with poisonous, partisan politics," Williams said. "Mississippians want a leader who will truly fight to enhance our quality of life. I am that leader. No other candidate is genuinely dedicated to meeting the needs of the people the way I am."

Like Hood, Williams said that expanding Medicaid—which Republican Gov. Phil Bryant declined to do after refusing to accept federal funds for expansion that were allocated by the Affordable Care Act—would be a top priority.

In addition to health care, Williams also cited "quality education for K-12 and beyond," "good jobs with livable wages," infrastructure, "talent flight," and "disparities in our laws and court" as issues she would seek to address.

She plans to officially launch her campaign with an address at the Old Capitol Museum at 10 a.m. on Dec. 8.

Williams said she knows that her lack of name recognition and political experience will be a challenge, but she is not worried.

"God chose young David to fight Goliath, a Philistine giant," Williams said. "The biblical account of David is a lesson of courage, faith and overcoming what seems to be impossible. I believe God has chosen me for such a task. I'm not worried about name recognition nor political experience. I have life experience and leadership skills."

Another "David" eyeing a run in Mississippi is state Rep. Robert Foster, R-Hernando, who announced that he is "exploring" a run for the Republican nomination for governor in a Facebook video on Sunday.

State House Rep. Robert Foster, R-Hernando, announced that he is "exploring" a run for the Republican nomination for governor in 2019. Photo courtesy Facebook/Robert Foster for Governor

"I've been praying and thinking about this decision for a long time," Foster said in the video, wearing a plaid shirt and a baseball cap, standing next to the tailgate of his 4x4 pickup on his family farm.

If he runs, he would likely face an uphill battle with Lt. Gov. Tate Reeves, who is expected to launch his own bid. Foster, who was first elected to the Legislature in 2015, said he wants to hear from Mississippians before he makes a decision.

As a state legislator, Foster has co-sponsored several controversial bills, including House Bill 1510, the Gestational Age Act, which prohibits abortions after 15 weeks even in the cases of rape and incest. Gov. Phil Bryant signed it into law in March, but a federal court struck it down on Nov. 20.

In a statement after the ruling, Hood told the Associated Press he would likely appeal to the 5th U.S. Circuit Court of Appeals.

"Because there is no controlling decision from our Fifth Circuit, it is our duty to appeal this ruling," Hood said in a statement to the Associated Press.

Mississippi's only abortion clinic, the Jackson Women's Health Organization, does not perform abortions after 16 weeks.

If the case makes it to the U.S. Supreme Court, it could be the case anti-abortion activists are hoping to use to overturn Roe v. Wade, the 1973 ruling that protects women's abortion rights. With Justice Anthony Kennedy—who was the swing vote that saved Roe when a similar case came before the courts in the 90s—now gone and replaced by Justice Brett Kavanaugh, anti-abortion activists believe they may finally be able to overturn Roe so that states like Mississippi can outlaw abortion outright once more.

Parties will choose nominees next summer, and Mississippians will elect a new governor in November 2019.

Ashton Pittman covers politics and elections for the Jackson Free Press. Follow him on Twitter at @ashtonpittman. Email him at [email protected].