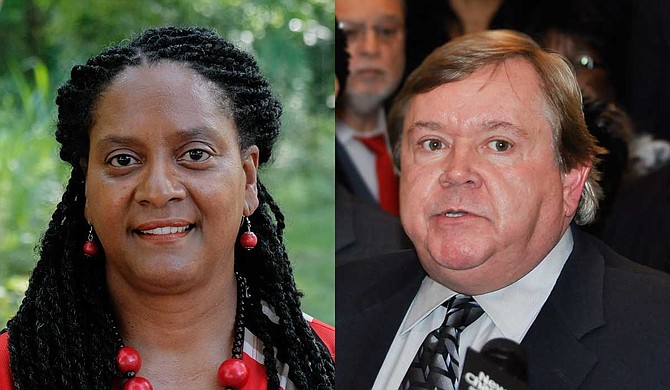 Velesha P. Williams, an African American woman from Jackson who is running for the Democratic nomination for governor of Mississippi, says party Chairman Bobby Moak will not "respect or acknowledge" her candidacy. Photo by Ashton Pittman/Trip Burns

At the Pike County Fairgrounds in McComb, Miss., in early June, Velesha P. Williams greeted Bobby Moak, the head of the state Democratic Party whom she had been trying to get in touch with for weeks.

"Why haven't you returned any of my calls or responded to any of my emails?" asked Williams, an African American woman from Jackson who is running for the party's nomination for governor.

"I've been traveling," Moak told her.

"I've been traveling, too," Williams said.

Williams relayed that conversation, which Moak did not deny, to the Jackson Free Press on Wednesday. She told the JFP that she feels ignored as a black woman running for the highest office in the state and that she no longer thinks Moak is fit to serve in his position.

The Jackson Free Press had reached out to ask her about a candidates forum that was supposed to take place at Jackson State University on Wednesday, but Attorney General Jim Hood, the frontrunner in the race, said he could not attend. The Hinds County Democratic Executive Committee and WJSU, the forum's organizers, then called it off.

'Not Something We Would Even Consider'

Williams was upset enough about the cancellation of a forum that could have given her a chance, as an underdog, to share her ideas with a broader Mississippi audience. But then she read a Mississippi Today story quoting Moak.

"There has been absolutely no effort on behalf of the Mississippi Democratic Party to have a debate between Democrats at the local or state level," Moak said. He said that the state party traditionally does not organize candidate forums and debates; local parties and news organizations do that.

When the reporter pointed out that the Republican Party is organizing a debate between its top three candidates, set to air next week to "have an honest exchange of ideas," Moak laughed, that outlet reported.

When asked if he thought Democratic candidates should follow the Republicans' lead and have an honest exchange of ideas in a debate setting, Moak laughed again.

"I have absolutely no problem at all with Republicans having all the debates they want," Moak said. "We're just not going to do that on our side. It's not something we would even consider."

Jim Hood CAPTION: Attorney General Jim Hood said he could not attend a July 17 forum with other candidates for governor.

When she read Moak's comments, Williams was outraged. It was "completely unacceptable," she told the Jackson Free Press. She accused him of "trying to protect Jim Hood" by denying voters "the opportunity to ask candidates questions in a debate setting, knowing that the foundation of the Democratic Party is African Americans."

Williams said she began calling and emailing Moak in December, but that he still has not reached out to her to discuss her candidacy.

'Not a Legitimate Forum'

In addition, Williams said she has "personally approached Jim Hood" and asked him when they could debate.

"He started humblin' and mumblin' and saying, 'My campaign folks will work that out,'" she said. "And I said, 'Well, I know, and you know that there are only two people that makes the real decision, and that's you and me. So when will we debate? And he didn't respond.'"

In a press statement about the cancellation of the July 17 debate, Hood's campaign said organizers did not reach out to his campaign until July 8. By that point, he said, his schedule was already full. His campaign was also suspicious of their approach, he said.

"We were not offered any alternative dates, were never contacted by WJSU and were advised that only three of the eight Democratic candidates were invited," Hood said in Tuesday's press release. "This threw up a red flag, because parties are supposed to remain neutral and should not discriminate against other candidates, especially without any written criteria."

Hood said he offered to pre-tape his answers because it was a "forum" rather than a "debate format." Organizers denied that request, though. Hood said his campaign suspected "an ulterior motive other than informing voters," implying that it could even be a Republican ploy.

"This very unprofessional approach sent up red flags in every direction," he said. "We are not sure which party is behind this, but this was not a legitimate forum."

In response, Hinds County Democratic Executive Committee Chairwoman Jacqueline Amos said in a statement that she offered July 24 as an alternative date to the Hood campaign, but both the campaign and WJSU rejected it.

The Jackson Free Press called the Jim Hood campaign for a response, but only received the following in response via email: "We received your voicemail here at the campaign. We have no additional comment regarding this issue."

Williams said she knows now that a debate "probably won't happen." She had hoped to use the opportunity to share her ideas and vision for the state, but now she feels "disgusted" and "cheated on behalf of" Democratic primary voters, she said.

For two hours, Williams shared her vision for moving Mississippi forward, and how she, a former U.S. Army officer who also spent years working at Jackson State University, plans to make it happen.

"They don't want people to make an informed decision," she said. "They want folks to just recognize a name, shade it in. And I think that's insufficient, and Mr. Moak ought to be ashamed of himself. He's supposed to be neutral in this."

Williams said she does not think Moak is fit to continue serving as the head of the Democratic Party in Mississippi..

"He's biased in his support. ... I'm calling out Mr. Moak for his failure to acknowledge and respect the African American women running statewide, for not knowing that the African American vote is the most significant vote for a statewide election," she said. "And I'm calling him out for his inability to respond to any of my phone calls or my emails that I've submitted in the past."

Moak defended himself on Wednesday in an interview with the Jackson Free Press. First, he said, the state party was never involved with the JSU debate.

"I don't know. I'm just kind of reaching here. I don't know if historically Dems at the state level have actually done debates among Democrats," he said.

The Jackson Free Press asked about the attempts Williams said she had made to reach out to him in recent months.

"I think she has tried to reach out," Moak responded. "I think we may have touched base, but I haven't sat down and had any long-term discussions with her or any other candidates because I feel like after people qualify for office, the state Dem party will do what they can to help all candidates, but we're not going to get involved."

Moak bristled at Williams' accusation that he was trying to help Hood, saying he had not had extended conversations with Hood, either, and "couldn't even tell you which one of those guys over there is running Jim Hood's campaign."

"I haven't interacted with any of their campaigns," Moak said. "Back in the Legislature, I could step out and say, 'I'm for candidate X, Y, or Z,' but in this position, I'm doing my best not to say anything about any one particular candidate."

Moak said some candidates have a "misconception" that the state party ought to be involved with their campaigns during the primaries.

The Jackson Free Press asked Moak what he thinks of Williams' assertion that he is ignoring her candidacy as an African American woman, along with the party's black constituency.

"That's fine. That's her opinion, thank you very much," he said. "Anybody who has followed my career in the Legislature would know that to be factually not true. But that's her opinion, and she's free to hold that."

Moak told the Jackson Free Press to reach out to black lawmakers he served with when he was a member and leader in the Mississippi House.

"Ask any of my colleagues who happen to be of the minority persuasion to look at my record as minority leader (in the Mississippi House)," he said. "We worked together to shut down the Legislature to make Phil Bryant call a special session for Medicaid expansion. I've supported, as a Democratic leader and member, not only the Democratic caucus, but the black caucus."

"Call some of my colleagues who happen to be black who were in the Legislature," he said, before listing the names of several black lawmakers whom he said would vouch for him.

'He Valued My Opinion as a Young Legislator'

Two of those Democratic representatives, Reps. John Hines and Rep. Earle Banks, told the Jackson Free Press they have known Moak for decades and never saw anything to indicate that he discriminated against nonwhite members.

When he first joined the House in 2001, Hines said, Moak welcomed him "with open arms."

"I met Bobby Moak when I first got elected to the House of Representatives. ... He valued my opinion as a young legislator, as an African American working with a Caucasian in an environment that has not always been open to opposite points of view and ideas," Hines said.

Banks, a House member since 1993, called Williams' comments "ridiculous," "politically inept" and said that her suggestion that Moak was ignoring her as a black woman was a "foolish accusation."

He said a candidate should know that party leadership cannot give the appearance of special treatment by engaging substantially with primarily candidates or offering advice or encouragement.

"It is absurd for any Democratic candidate to make that kind of accusation against our chairman," Banks said.

He pointed out that the 80-member Democratic executive committee, made up of a racially diverse group of men and women, unanimously chose Moak to lead the party.

Moak said he was sorry if Williams or anyone else feels ignored.

"If I've slighted someone, I certainly apologize for that. I certainly didn't mean to do it in a mean or not caring manner," he said. "But I also want to make sure I'm not stepping out there saying, 'I'm for this candidate or that candidate.'"