Reeves vs. Hood This November in Mississippi Governor's Race 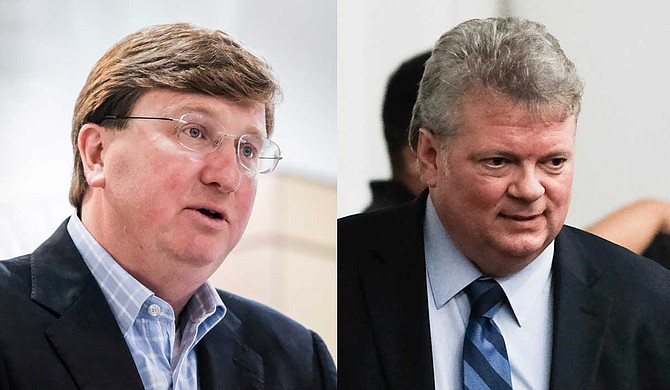 Reeves, 45, spent more than $6 million this year — the most of any candidate in the race, regardless of party. Waller, 67, spent about $1.4 million. Waller is a retired brigadier general in the Mississippi National Guard and son of the late Gov. Bill Waller Sr., a moderate Democrat who served from 1972 to 1976.

"We've got to work to bring the Republican Party together, and I know that the Republicans across Mississippi are going to rally behind our campaign to ensure that Mississippi does not elect a liberal Democrat to the office of governor," Reeves told The Associated Press before he appeared at his victory party.

"Jim Hood will tell you that welfare and Washington are the only things we need," Reeves told them.

After Reeves won the Republican nomination, Hood said: "They just want to throw around labels. I'm going to talk about issues."

Hood, 57, had spent about $1.1 million through the end of July. He said Tuesday that Waller ran a "gentlemanly race" and discussed quality-of-life issues. Hood said he hoped some Waller supporters would cross party lines to vote for him in November.

"Tate Reeves just ran a negative campaign," Hood said. "The reason he didn't talk about the issues is because he doesn't have any."

Waller told a subdued group of supporters at his party that he believes his campaign raised important issues that will continue to be debated leading into the general election, including improving highways, bolstering health care and increasing teacher pay.

"We ran a campaign we can be proud of," Waller said.

Mississippi, Louisiana and Kentucky are the only states electing governors this year, and Mississippi has the only race without an incumbent. Republican Gov. Phil Bryant, who is limited to two terms under Mississippi law, endorsed Reeves.

Hood is trying to become Mississippi's first Democratic governor since Ronnie Musgrove was unseated in 2003. It's a conservative state that Donald Trump won comfortably in the 2016 presidential election.

Some minor problems cropped up Tuesday with a small number of voting machines: An electronic machine in northern Mississippi's Lafayette County was reported to be switching votes from one candidate to another, affecting 19 votes, said Anna Moak, spokeswoman for the Mississippi secretary of state's office.

A Waller supporter in Lafayette County, Ethan Peterson, shot video of that machine, which he said already had an X next to Reeves' name when he inserted a card to start his ballot. He tried several times to vote for Waller and said he called a poll worker over for help.

Peterson said he and the poll worker figured out how to clear the screen, and he was able to vote for Waller.

Lafayette County Circuit Clerk Baretta Mosley told the AP that all of the county's voting machines were functioning properly when they were tested Friday. She said a machine can fall out of calibration and malfunction if it is later dropped or handled roughly.

Moak also said that in the state's largest county, Hinds, some electronic poll books used by Republicans were not showing whether people had voted in the Democratic primary Aug. 6. People who vote in one party's primary are banned from voting in the other party's runoff. Moak said poll workers were checking voters' history on paper records that were on hand as a backup.

Waller ran a TV ad portraying himself as the adult in the race. In the ad, a child resembling Reeves and wearing the candidate's oft-preferred khaki pants and blue dress shirt, wreaks havoc at a birthday party.

Reeves has acknowledged his own hard-nosed reputation: In an ad run in the closing days of the campaign, he looks directly at the camera and says, "Now here's something you won't see often in politics. I'm here to tell you my opponent Bill Waller is a nice guy. I respect him, but I disagree with his ideas."

The candidates differed sharply on two issues that dominated the discussion over the past several weeks: gasoline taxes and expanding Medicaid.

Reeves opposed both ideas and ran on a record of cutting taxes.

Hood has said he wants to reduce Mississippi's 7% sales tax on groceries at least by half — and possibly altogether. Hood also said he wants to expand Medicaid to the working poor, which is an option under the federal health overhaul that then-President Barack Obama signed into law in 2010. Mississippi is among the 14 states that have not expanded the program.

Two other gubernatorial candidates who are running low-budget campaigns will be on the Nov. 5 general election ballot: the Constitution Party's Bob Hickingbottom and independent David Singletary.