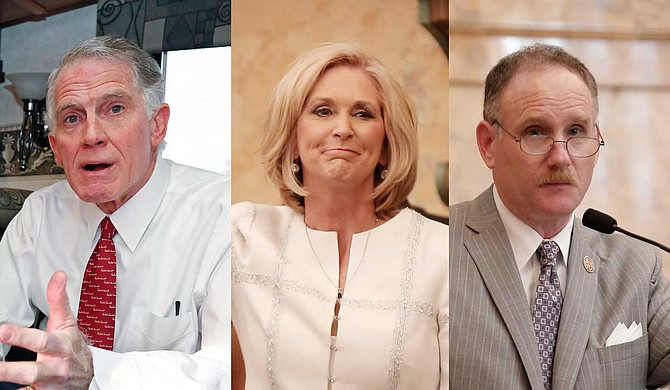 Mississippi State Treasurer Lynn Fitch will not join her Republican opponents in the race for attorney general at two planned debates later this week. Photo by Rogelio V. Solis/SWIK via AP

Republican candidate for Mississippi attorney general Andy Taggart criticized one of his opponents, State Treasurer Lynn Fitch, in an open letter on Monday because she does not plan to attend two debates later this week.

"As candidates for attorney general, I believe we have a particular responsibility to allow the voters of our state to compare our skills and experiences as advocates—and our positions as public servants—in person and head-to-head," Taggart wrote in the June 3 letter.

The Jackson Free Press reached out to the Fitch campaign late Monday afternoon for comment. Campaign Chief of Staff Michelle Williams said Fitch had let the organizers of both debates know months ago that she would not be able to participate due to scheduling conflicts. Fitch has events scheduled in north Mississippi on both days, Williams said, but she does plan to participate in a forum in Vicksburg on Saturday and another event in Madison County next week.

"She's definitely out there talking to voters all the time," Williams said, noting that Fitch has been sharing ideas with voters since 2018.

The other Republican in the race, Mississippi State Rep. Mark Baker of Brandon, said he is "not concerned" about what other candidates are doing, but did confirm to the Jackson Free Press on Monday that he will join Taggart for both debates.

"I think it's important to be as active as possible when you campaign for state office so people have an opportunity to hear you express positions on the issues and interact with you on those issues and talk with you about them," Baker said. "And so that's why I've been going around the state since May of last year talking about my vision for the office. It's not enough for me to put my name on the ballot. I have enough respect for voters, I have too much respect for voters, to just put my name on the ballot and not actually go out and ask for their vote and interact with them as much as humanly possible."

Former U.S. 5th Circuit Court of Appeals Judge Charles Pickering, who is from Laurel, Miss., will moderate the debate at William Carey on Wednesday. He became the center of controversy in the 2000s after former President George W. Bush nominated him for a seat on the 5th Circuit Federal Court of Appeals in New Orleans.

Democrats in the U.S. Senate refused to confirm Pickering because of questions about his views on race. They pointed to his decision to grant leniency to Daniel Swan, who was part of a trio that burned a cross outside the home of an interracial couple in Improve, Miss., in the 1990s.

Mississippi Judge a Thorn in Kavanaugh’s Past

Pickering, who the New York Times reported as referring to the act as a "drunken and foolish prank" during the trial, told senators during his confirmation hearings that he gave Swan a reduced sentence because it would not have been fair for Swan to spend years in prison while the other two had only served a few months in home detention. But the other two cross-burners, one a minor and the other described in court documents as "feeble-minded," had admitted to the crime, while Swan had not.

Democrats also questioned Pickering for his past segregationist associations with the likes of former Mississippi Lt. Gov. Carroll Gartin, a fierce segregationist. Pickering campaigned for Gartin and described him as a "progressive," even though Gartin fought desegregation at every step of the way. A November 1958 copy of the Greenville Delta Democrat Times quotes Gartin as urging the "Legislature to enact every conceivable law aimed at protecting our segregated system."

In later years, though, Pickering helped the FBI and other agencies go after the violent Ku Klux Klan, and became a target of the Klan himself. He testified against klansman Sam Bowers when he was on trial for the firebombing death of Hattiesburg civil-rights activist Vernon Dahmer.

"There were some who were surprised by my stand as they could not conceive a fellow southerner taking a stand on this hot and divisive issue," Pickering explained to ProPublica in 2014. "However, I think most, even Klan members, did not expect me to take a different stand. They did not even approach me as they did some other office holders that I knew. I think the Klan perceived that I had strong convictions and could not be swayed. They did not approach me. They did condemn me in their publications and urge my defeat at the polls, but they never came and asked me to look the other way."

Though the Senate rejected Pickering, Bush bypassed them and used a recess appointment while senators were not in session to seat Pickering on the 5th Circuit. That appointment expired after one year, and the Senate never confirmed him.

The Federalist Society, the Gulf Coast branch of which will host the debate in Hattiesburg, invited Pickering to serve as the moderator. It, too, has a controversial background.

The Federalist Society began as a student organization made up of conservative students at Yale Law School and the University of Chicago in the 1980s. Today, it works to help put conservatives who agree with its preferred policies, like its strict opposition to abortion rights, in legally consequential positions. It has a near iron-clad lock on Republican federal court appointees.

The Federalist Society approved all five Republican appointees who hold a majority on the U.S. Supreme Court, including its most recent addition, Judge Brett Kavanaugh. Each are affiliated with the organization. When George W. Bush tried to appoint a family friend, Harriet Miers, to the Supreme Court, the Federalist Society launched a national effort to convince him to rescind the nomination because she was not affiliated with them, and they did not know her position on key issues like abortion. Bush eventually withdrew her and nominated the Federalist Society-approved Samuel Alito.

Last month, the Washington Post reported that Leonard Leo, a top Federalist Society executive at its national branch in Washington, D.C., helped a variety of groups raise more than $250 million to push for conservative appointees to the courts, including Kavanaugh and President Trump's other Supreme Court appointee, Judge Neil Gorsuch.

The Federalist Society includes a "State Attorney General Guide" under the "Projects" section of its site, which links to news and resources related to each state.

Mississippi will hold party primaries for all statewide offices, including attorney general, on Aug. 6. Jennifer Riley-Collins, the Democratic candidate for attorney general, is running unopposed in her party.

Mississippians must register at least a month before an election in order to be eligible to vote, and must show an accepted form of photo ID at the voting booth, a list of which is available on the Secretary of State website. County Circuit Clerks across the state offer all residents free photo IDs that can be used to vote.