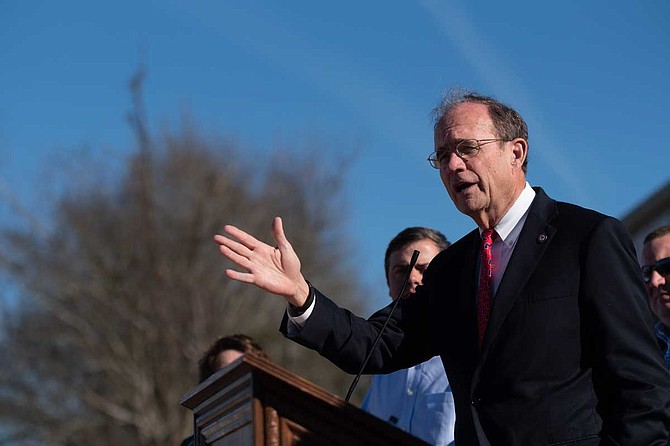 Mississippi Secretary of State Delbert Hosemann said at a campaign stop in Hattiesburg that he was looking at options to expand Medicaid in Mississippi. He is a candidate for lieutenant governor. Photo by Ashton Pittman.

Since 2013, Gov. Phil Bryant has refused federal funds to expand the program, which would bring coverage to 300,000 Mississippians who make too much to qualify for traditional Medicaid but not enough to buy their own insurance.

At a stop in Hattiesburg for his campaign for lieutenant governor on Thursday, Mississippi Secretary of State Delbert Hosemann told the Jackson Free Press that he is "looking at" supporting an expansion. Rep. Robert Foster, R-Hernando, is supporting expansion as part of his GOP primary campaign for governor against current Lt. Gov. Tate Reeves.

"When it comes to our Medicaid program, pursuing real Medicaid reform is no longer a question," Foster's health-care platform on his website reads. "200,000 - 300,000 hard-working Mississippians and $1 - $2 billion dollars are being left off the table each year."

Just a few years ago, the idea of Mississippi Republicans running for statewide office while embracing Medicaid expansion would have been inconceivable. When President Barack Obama signed the Affordable Care Act into law in 2010, it included a provision requiring states to expand Medicaid. The federal government would pay 100 percent of the cost of state expansions for the first several years, then 90 percent in later years.

"The critical component to me for expansion is that it breaks even," Hosemann told the Jackson Free Press Thursday. "I can't afford to do $250 million or $500 million to expand health care, and still pay my teachers or pay for infrastructure."

A 2015 Mississippi Institutions of Higher Learning study found that, after federal contributions to state expansion dropped to 90 percent, Medicaid expansion will cost the state $100 million to $150 million per year. The study estimates that as many as 313,000 Mississippians would gain coverage.

"Basically, what we want to do is make sure the expansion is paid for without breaking the budget in the state for everyone else," Hosemann said Thursday.

If the State continues to reject Medicaid expansion, it will have given up $14.5 billion between 2013 and 2022 that the federal government allocated for the state's expansion, an analysis from healthinsurance.org notes. Mississippi taxpayers, meanwhile, will have paid in $1.7 billion to fund expansions for other states.

Though Bryant called expansion a "fool's errand" several years ago, and Republicans argued the additional cost would mean cuts to education and infrastructure, that has not stopped them from from cutting those budgets anyway. Those cuts came after Republicans slashed taxes by more than $400 million in 2016, including $260 million a year for corporations.

In the governor primary, Foster's position could elevate him against Reeves, who has long been an opponent of the expansion and has yet to show an inclination to change his position. A majority of Mississippians, 53 percent, support Medicaid expansion.

"The lives of Mississippians cannot continue to be used as a political ploy or a gimmick to make the opposing party fail," Williams said in December. "Mississippi tops the charts for poor health indicators, highest in cardiovascular deaths, highest in premature death, second-highest in obesity, highest in low birthweight and highest in infant mortality. Mississippi needs a leader who is committed to protecting life and the health of Mississippians."

Since Bryant first rejected the expansion in 2013, not only has it left in gap preventing around 300,000 working Mississippians from coverage options, but it has helped facilitate the closure of five hospitals in the state. When Hood announced his run for governor in October, he made the hospital closures a dominant theme. The hospital in his hometown of Houston, where he made the announcement, closed its doors in 2014.

Though Foster calls the policy he supports "Medicaid reform" instead of using the Obama-linked term "Medicaid expansion," he suggested Mississippi could work with the White House to negotiate wavers for a version of the expansion Republicans would find more acceptable.

"We can fix this by working with the Trump administration, in a bipartisan fashion, to help the hard-working people of Mississippi," his website reads.

Models for Hosemann: Indiana and Arkansas

"We have been monitoring Arkansas and Indiana and other states that have gotten waivers, down to where it starts to be closer to a net zero or close," Hosemann told the Jackson Free Press. "And I think that may be achievable. ... I am open to exploring those ideas, and I intend to explore them."

A December report from the Center on Budget and Policy Priorities found that nearly 17,000 Arkansas Medicaid beneficiaries lost coverage after a waiver allowed the state to add work requirements of 80 hours per month. Those losing coverage due to the requirements included people with chronic conditions and people who should have met the requirements.

"For example, one working beneficiary with a chronic condition described losing his Medicaid coverage and then being unable to afford medications, in turn losing his job due to his deteriorating health," the report reads. "Another is rationing her medication after being unable to navigate the reporting requirement and losing coverage, despite working 25 to 35 hours each week—which equates to well over the monthly minimum."

Arkansas also restricted reporting for work requirements to an online portal, making it difficult for the more than 20 percent of Arkansans without broadband access to report. The website, which is "not mobile friendly" and "requires a complex login procedure," is not available from 9 p.m. to 7 a.m. each day. The state has announced plans to make reporting by phone an option.

In an interview with the Jackson Free Press on Jan. 4, House Democratic Minority Leader David Baria, D-Bay St. Louis, pointed to another state as an example of successful Medicaid expansion: Mississippi's sister state, Louisiana. After that state replaced an anti-expansion Republican governor with Democratic Gov. John Bel Edwards, the state expanded Medicaid in 2016.

A year in, a report from Louisiana State University and the Louisiana Health Department found that expansion had saved the state $317 million and created 19,000 new jobs, even as more than 470,000 people gained health coverage—100,000 more than anticipated.

The impact on people's lives was tangible, too. Of those who gained coverage in the first year of the expansion, nearly 50,000 people began outpatient mental-health treatment; almost 20,000 began treatment for substance abuse; 7,000 were newly diagnosed and treated for diabetes; 338 women who gained insurance through expansion were diagnosed with breast cancer; and 285 people were diagnosed with and treated for colon cancer.

"You look next door in Louisiana. They provided health care to their working poor, and their hospitals aren't failing," Baria told the Jackson Free Press.

Baria was responding to reports last month that Bryant and state Republican lawmakers were "trying to figure out how to expand Medicaid" this legislative sessions "without calling it expansion," as a source told Politico. Bryant's office denied the reports.

But a curious tweet on Jan. 1 from Mississippi Executive Medicaid Director Drew Snyder fueled suspicions the GOP leaders may be considering their own version of Medicaid expansion to kneecap Hood's central campaign issue.

Baria, a longtime advocate for Medicaid expansion, said that if Bryant is willing to do something "to help Mississippi's working poor," he will find willing partners on the Democratic  side of the aisle.

'I Don't Care If You Call It Philcare'

"I don't care if you call it Philcare—it's just a name," the Democratic leader from Bay St. Louis told the Jackson Free Press on Jan. 4. "But we need to get serious about providing health care to our working poor who don't have any health insurance and about helping our rural hospitals—many of which are failing. And the other aspect we're talking about here would be job creation. It's been estimated that we could create 8,000 or 9,000 jobs if we would simply accept our tax dollars back."

Hosemann also told the Jackson Free Press on Thursday that introducing a state level healthcare exchange "could be" a possibility, too. Currently, Mississippians eligibility for subsidies under the Affordable Care Act must buy insurance through the federal marketplace at healthcare.gov.

In 2011, Mississippi Insurance Commissioner Mike Chaney, a Republican, had plans for an ACA state level exchange called One Mississippi that could have brought in more insurers. Bryant scuttled those plans, though, leaving Mississippians dependent on the federal marketplace for ACA compliant plans.