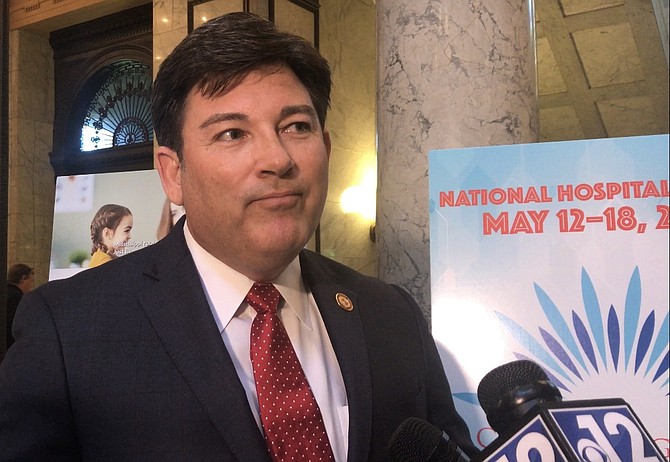 Timothy Moore, president and CEO of Mississippi Hospital Association, talks to the press about Mississippi Cares, a new healthcare proposal that offers benefits for the uninsured and the state. Photo by Aliyah Veal

JACKSON—Mississippi Hospital Association board members stood statuesque behind Timothy Moore, the president and chief executive officer of MHA, in the capitol rotunda on Monday as he painted a picture of what it might be like to be uninsured and poor.

"Yesterday was Mother's Day—let's use that as an example. Put yourself in a position of a young mother of three," Moore said,teaching preschool. She gets sick. She has a decision to make: Am I going to pay for treatment, go see the doctor, or am I going to buy groceries this week?"

During the press conference, MHA unveiled a proposal called "Mississippi Cares" that, like Medicaid expansion, would insure around 300,000 more adults in the state, ages 19-64 who earn up to 138% of the federal poverty level.

"This is not Medicaid expansion. This is Medicaid reform," Moore told the audience.

The new proposal is a private-public partnership between the state, government, hospitals, and plan members that "emphasizes personal responsibility and healthcare consumerism," a press packet from the event says.

In the proposal, the packet says, patients would pay $20 a month in premium payments, as well as, a $100 for non-emergency use of a hospital emergency department.

"To put it simply, it is a plan to provide more coverage for individuals across the state of Mississippi, and see that hospitals and providers are paid appropriately for services they render," Moore told the Jackson Free Press.

The plan is similar to ones Republican candidates for governor, namely state Rep. Robert Foster and former Mississippi Supreme Court Chief Justice Bill Waller, have voiced. At its core, the plan is Medicaid expansion with some tweaks. Republicans who support expanding Medicaid favor the term "Medicaid reform" to avoid associations with expansion, which is part of former President Barack Obama's 2010 Affordable Care Act.

When President Barack Obama signed the Affordable Care Act into law in 2010, it included a provision requiring states to expand Medicaid. The federal government would pay 100 percent of the cost of state expansions for the first several years, then 90 percent in later years.

Since the governor first rejected the expansion in 2013, it has not only blocked around 300,000 working Mississippians from coverage options, but it has helped facilitate the closure of five hospitals in the state.

Foster explained his support for expansion in a January interview with the Jackson Free Press.

"We're sticking our head in the sand because we don't like the policy of Obamacare," he said. "I think it's bad policy. The ACA is bad policy that had a lot of flaws, but it is the law of the land, and Mississippi is going to have to do what's in our best interest until that law is changed in Washington."

One Republican candidate for governor who is not supporting any form of Medicaid expansion, though, is Lt. Gov. Tate Reeves, the party's frontrunner.

On the same day as Reeves' comments, a Millsaps College-Chism Strategies poll found that 60 percent of Mississippians support expanding Medicaid, with fewer than 29 percent opposed.

When he announced his run for governor in October, Democratic Attorney General Jim Hood made it clear that Medicaid expansion would be a centerpiece of his campaign. The hospital in his hometown of Houston, where he made the announcement, closed its doors in 2014.

Mississippi Secretary of State Delbert Hosemann, who is running for lieutenant governor, has also expressed support for a version of Medicaid expansion akin to MHA's proposal.

'Failure is Not an Option'

Debt from hospitals has surpassed $600 million, making Mississippi among the highest in the country in medical debt, with half of the state's rural hospitals in danger of closing This new plan would not only eliminate debt, but create more jobs and boost revenue , the press packet for the proposal says.

"We need public support. We've got friends, neighbors, family members that are having to make decisions on whether or not they (have) access (to) healthcare," Moore told the press.

Moore, who previously served as president of North Mississippi Medical Center, became president of MHA in 2013. He said they have created previous health-insurance models before, including Senate Bill 2441 in 2015, which created Mississippi True.

"In order for (Mississippi Cares) to be successful, the patient and the provider has to be in control of how their care (is) generated, how the right resources are used to take care of those patients," he told the Jackson Free Press.

Moore also said that there is no exact date on how soon the proposal will be implemented. MHA still needs to do some work with state agencies, and funding would require a Medicaid waiver.

"You've got a lot of moms out there, that may not have insurance, that might or might not qualify for Medicaid, but under this program, they could possibly qualify," he said.

States like Louisiana, Indiana, and Arkansas have used this health-care model and have seen results across the board, he said, expressing confidence that Mississippi will be next.

"Failure is not an option," he said.