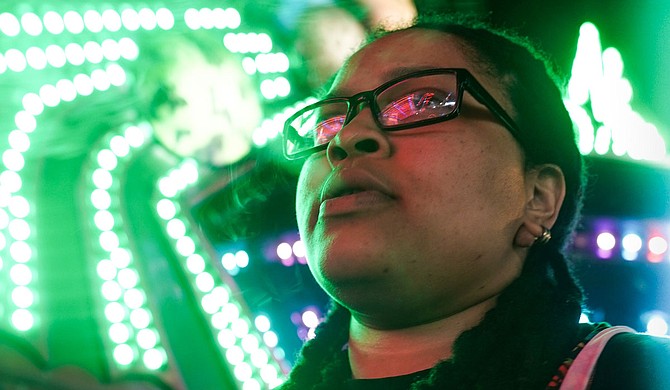 Rapper Yung Jewelz is celebrating a birthday and the debut of her first album, MVP: Moods, Vices and Problems, which debuted April 22. Photo courtesy Mdub

Rapper Yung Jewelz, aka the Paid Hipster, defines herself as a versatile artist, a rapper you can play on your good and bad days. Whether going to the club or looking for gospel, Jewelz said she has a song for you.

“I feel like that balances it (her sound) out because you don’t have to worry about being settled into a box,” she told the Jackson Free Press.

Born Jewelee Wilson, she describes growing up in Jackson as fun, a dichotomy of being in the country and the city at the same time. She grew up in the Shady Oaks community and is an only child. As a kid, she found her calling in music, where she would rap about a trait assigned to her.

“I’ve been rapping since I was a kid. I started in elementary doing the core trait of the month with my best friend, that was in fourth or fifth grade,” she said.

After graduating from Murrah High School in 2012, she attended the Art Institute in Nashville, Tennessee, majoring in Audio Production. Her time in college allotted her the opportunity to work with certain sounds and systems, hone her networking skills and develop her sound.

“It was a growing process, as well as, a learning process. It helped me appreciate a lot more than just the music itself. Beforehand, I had never even thought about the business aspect of music,” the rapper said.

She graduated in 2016, but moved back home a year prior to finish classes online due to homesickness. But it wasn’t until her first public performance at the Soul Wired Cafe in 2015 that the match was lit. Yung Jewelz was on her way.

“I always knew I wanted to do music, but (after) that first performance, it was real. It was like yeah, this is it,” Jewelz said.

All she had learned in college came full circle as she connected with local artists like singer Sika and rapper Dolla Black, who she said was the first person to give her confidence that she was going in the right direction.

Jewelz dubs her sound hipster rap, a sound influenced by her love for rap and R&B and genre she defines as a melting pot of all her influences. It’s a gumbo, she said.

“With me being from the south and my mom being from New York, I have two different types of musical styles intertwined into one. I still have that Southern groove and that laid back feel, but I also got that heavy hip hop New York sound,” Jewelz said.

These culmination of sounds can be best heard on her debut album, “MVP: Moods, Vices, and Problems,” which she released on April 22 across streaming platforms. It’s the second project she’s released on this date, her “Earth Day” EP taking the date two years prior. But it’s also her birthday.

The 13-song album promises what the title implies, a merrying together of various moods and vibes that takes the listener on a ride of highs and lows, fun and self-reflection. The project borrows talent from local artists and producers, though it’ll be a guessing game for listeners since they won’t be able to see the features in the song titles.

Yung Jewelz said unlike her previous projects, “Hipster Logic” and “Earth Day,” “MVP” displays a vulnerability not seen before. “To me, my music is my story, those around me (and) folks I’ve been influenced by. Just to get it out and to be able to have it recorded and have it to where you can listen to it over and over again, it’s a big thing for me,” the rapper said.