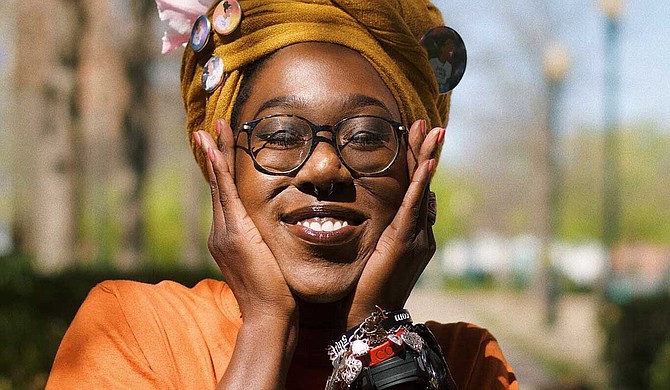 Gautier, Miss., rapper Vitamin Cea said she wants to instill an understanding and honor of being from Mississippi in her music. Photo by Alexander FRE$CO

When Charity Hicks was in eighth grade, her friend Jasira introduced her to Nicki Minaj after Jasira remixed one of Minaj's songs. Hicks loved the remix, and it inspired her to write her own.

"I was like, 'I could do that, too.' I started writing remixes to a lot of songs. I was remixing 'Pretty Boy Swag' (by Soulja Boy) and 'Roger That' (by Young Money). Those are the first raps that I remember officially writing out and rapping. It was a whole other way to express myself," she says.

In high school, Hicks took on the moniker, Vitamin Cea, which was inspired by the supplements she used to take when she was sick, and by a message her youth pastor used to drill into the children at her church, the rapper said.

"He used to always teach us that we are the medicine. Vitamin C is a supplement to help you heal yourself because God has already put it in you to heal. It's a booster. If you take it enough, then you don't have to worry about being sick," she said.

At first, Hicks was insecure about rapping, but she became more serious about it when people told her that her raps touched them. The  encouragement and confidence of rap motivates her, she says.

"It has helped me feel more powerful, wiser, and helped me be introspective and reflective because there is so much packed into so many lyrics," Hicks says.

She describes her hometown of Gautier, Miss., as "slow-paced and stable." Although residents don't have much to do, they make their own fun, she said.

"Everything is really stable in terms of like not a lot of changes. Me and all my siblings went to the same schools. I've been in the same house all my life. Me and my siblings had some of the same jobs," she says.

After graduating from Gautier High School in 2014, she  attended the Mississippi Gulf Coast Community College and  received her Associate of Arts degree in 2016 before transferring to Jackson State University.

Hicks took two years off and saved up so she would be financially stable when she attended Jackson State; however, she didn't finish her degree because she wasn't completely focused, she says.

"I lost myself to find myself. I came home because I didn't want to mess up my GPA if I wanted to go back," she says.

Although school was no longer an option for Hicks, her music started to pick up, and she started doing more shows. Before she attended Jackson State, Hicks says, her music content was based around her personal experience. School made her realize how rare being from Mississippi is, and she is proud to be from here, she says.

"The only way that it could hold me back is if I choose not to take Mississippi with me wherever I go. Being proud of where I'm from helps it to where it's really an honor being from Mississippi and being able to represent who we actually are when people who have never stepped foot on Mississippi soil already have a preconceived idea of who we are," she says.

Hicks wants to help instill an understanding and honor of being from Mississippi in her music. "Our ancestors fought for their lives and our lives so we can have this conversation right now. Right here on this soil, centuries ago, this same soil was occupied by our ancestors fighting to be," the rapper says.

She describes her rap style as versatile, with a penchant for storytelling and conversational rap. Although her main influences are her family, friends, and gospel mavens such as Donnie McClurkin and Kiki Sheard, she does look up to rappers like Chance the Rapper, Kendrick Lamar and Mississippi's own Big K.R.I.T., she says.

In April 2017, Hicks released her debut project "JoyFull Noise," which is about keeping joy through the noise and chaos of life, she says. She started the project before she got to Jackson State in early 2015, but she didn't know its name until summer 2016, she says.

"I was coming to a point where I could see where I wanted to go. It was just a dope process because I was working with one of my best friends, Elias. We were all working together in this space and creating as much as we could create," the rapper says.

In the midst of creating the album, Hicks endured some personal issues with her parents, she says, which affected her emotionally. Listeners can hear this on the album.

"It gets a little darker because I was going through a darker space in life, and that was more like the noise as  opposed to the joy. I had to challenge myself by what I challenge others to do," Hicks says.

Vitamin Cea will perform at the Mississippi State Fair on  Oct. 3 alongside Newscast, Seth Power Music and Jackson native rapper Dear Silas. As for the future, Hicks prays for a lot of growth and hopes to be touring and have one book written.