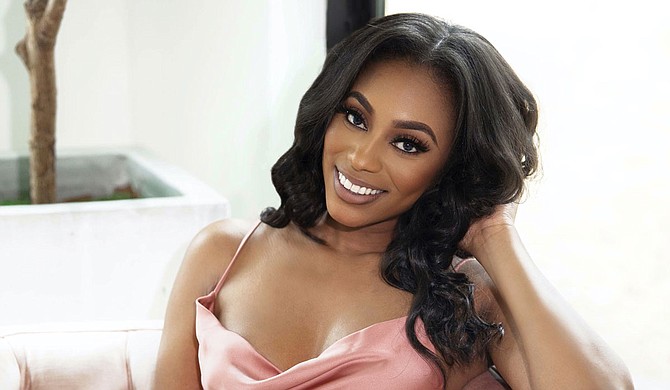 Latrice Rogers made her first $1 million within a year of opening her business. Photo courtesy Sterling Photography

Latrice Rogers was always told that going to school to become an attorney or doctor would equate to success, so that's what she did. She graduated from Canton High School, enrolled at Jackson State University and obtained her bachelor's degree in biology in 2010. But Rogers, like many college graduates, struggled to find a job in her field after graduation.

After four long years of studying biology, she found herself working at Office Depot making $8 an hour. The Canton native couldn't wrap her mind around all the hard work she put into leaving her hometown and attending college only to ultimately end up making not even a dollar above minimum wage. It didn't make sense, she said.

"It was that moment where I was like, 'Something has to give.' Hair was always a fascination with me, doing makeup; I was just always into it. If you would have known me back in a day and saw me, the first thing you would have probably noticed was my hair," Rogers told the Jackson Free Press.

Rogers wouldn't be styling hair, though, but creating a hair extensions brand, Goddess Lengths Virgin Hair, that would ultimately make her a multimillionaire. She said she would wake up and go to sleep with hair on her mind, so she started researching different types of hair.

"I had little money, so I had to be careful what I buy and that's where research came in. I bought a few batches of hair, and my friend was a hairstylist, so she tested the hair out on her(self) and on me," the business mogul said.

Rogers and her friend tested the longevity of the hair, the shedding, the movement of the hair, which would ultimately help her determine whether the hair would be good quality or not. After various tests, she found the perfect hair and started selling it.

"I would be at Target, and I would literally have a line wrapped around the car with people walking to my car, ready to purchase hair. And I'm sitting in the car passing bundles out the window," Rogers remembered.

In 2013, Rogers went from making $75 a day to thousands of dollars a day. A year into her business, she made her first million, she said.

"It was at that moment where I knew it wasn't that hard of a choice, basically. I had to figure out which worked better, and my hobby at that time was what worked for me," Rogers said.

After Goddess Lengths Virgin Hair started to take off, Latrice's next step was acquiring a storefront, an idea that a Target security guard gave her, she said. She moved into a small space off McWillie Drive for about $300 a month. Around this same time, she partnered with her alma mater, Jackson State University, to become a vendor for the school's student campus card.

"When you go to college, you really don't have any money, which is why the JSU supercard is so important. It's the only money that's accessible, and the thing about the campus cards is it's only certain vendors who take it," Rogers explained about the business move.

The partnership with the school was a really lucrative business that helped her grow to a bigger storefront on Northside Drive with a retail and salon side. And next came one of her most creative ventures, a hair vending machine, which was the brainchild of Rogers and her husband, Clifton Rogers.

The idea spawned from the need to provide customer service at any time—during a point when customers would call her phone at 2 a.m. or 3 a.m. to buy hair extensions, she said. She and her husband decided to put the vending machine in Northpark Mall, where the mall opens as early as 5 a.m. and closes as late as 11 p.m.

"The opening day of the vending machine, it was like hundreds of people lined up. The guy that was over the mall had to call in security guards. Of course, at this point, I'm thinking I'm about to get put out of the mall," Rogers said.

"He was turning red in the face because he'd never seen anything like that. When Jordans come out, you know how their line is, but my line was a lot longer than the Jordan line," she said.

"A lot of people look at selling hair and think it is a hobby. You're not the traditional lawyer, doctor or nurse. But it's so much that goes into the backend of actually making a successful business and developing it into a multimillion dollar business," she said.

Weaves are Rogers' go-to hairstyle, but she wasn't really taking care of her hair, which would result in little patches in her head, she said. She used her science degree and began mixing different chemical-free, organic ingredients that helped to grow her hair back stronger and healthier.

"I gave them to my mom (and) my sisters, and they're telling me how amazing these products are. They said, 'hey you need to market and sell them.' Everybody, of course, needs hair maintenance, so it came from that notion—taking care of your hair underneath your protective styles," Rogers added.

Since the hair-care line's launch, consumers from across the country have been buying her products. Currently, she's working with a major retail store to get her products in stores, hopefully by the middle of 2021.

"I'm just thankful that people believe in me, and they trust my word. That just goes to show, reputation takes you a long way and just doing right by people, providing great service and great products. It makes a difference," Rogers said.

Her continued success has now led to Latrice Rogers' world debut on the Oprah Winfrey Network's new reality show, "The Belle Collective." The series follows "the personal and professional lives of five successful, glamorous boss women who are redefining what it means to be a southern belle in Jackson, Miss.," a press release reads. Cast members include Rogers, Antoinette Liles, Tambra Cherie, Lateshia Pearson and Marie Hamilton-Abston.

Rogers said it took a lot of convincing from Jacoby Magee, who pitched the idea to Carlos King, for her to join the show. Reality television comes with a lot of exposure. Being a private person, she found herself hesitant to let the world in, she explained.

"You may know my business but not even know my face because I feel like I don't have to be in the forefront as long as I'm providing a great product and great service. That's all that matters," she said.

Magee contacted Rogers' friend, who ultimately convinced her that she would be great for the show and that it would be a great opportunity to tell her story, Rogers explained.

After accepting the offer in 2019, Rogers began filming during the pandemic, she said. Everybody from film crew to cast were tested for COVID-19 three times a week, which allowed filming to proceed as normal and allowed the cast members to film without masks.

"I always thought that reality shows were fake until I actually started doing a reality show. With the one that we're doing, I know personally that everything I bring to the table is the real me—and I think for the most part with the other girls as well," Rogers said.

At first, the businesswoman would read reviews about the show, but she stopped to avoid any negativity in her life and small circle, she said.

"I try to steer away from the blogs because they don't personally know me. They know what they're seeing on TV. They kind of try to pick at your life, put their input and say what they think should have went on. You don't know me, so how can I get mad at your opinion?" Rogers said.

The show's title is interesting as the term "southern belles" has often referred to young, unmarried, southern, white women of upper socioeconomic classes. The term was born during the antebellum era, and their image was characterized by hoop skirts, corsets, pantalettes, wide-brimmed hats and gloves.

This style of dress was most notable in the premiere episode of "The Belle Collective," where some of the ladies dressed up in southern-belle attire for brunch. While Rogers is aware of the term's history, she defines herself differently.

"I definitely define myself as a strong, successful Black woman. I don't let titles dictate me. A lot of people look at women in the South (as) poised women or successful women. They're belles in the South, (and) I would say we're the new definition of a southern belle," she said.

Despite the drama within the show, the exposure has helped increase sales for her business, she said. The pandemic allowed her to become more strategic in how she markets and promotes her product since everyone is buying and watching from home, she said.

"You would think that people being quarantined in their home wouldn't care about beauty, hair, makeup or anything like that. But the year COVID hit was actually the most successful year of my business thus far," Rogers said.

Another element to being a part of this reality show is the exposure it brings to Jackson and the state of Mississippi. Rogers said Mississippi has it a lot harder than other states and that here you have to work twice as hard.

She knows people will see the state and think what they want, but she hopes the show changes their perspective.

"I want to definitely give off the image like we're not all country bumpkins. We're not uneducated. Mississippi is just so much more," Rogers said. "I think Carlos King picked a dynamic group of women to display what Jackson is, what Jackson is made of. We're like any other state. We work hard. We grind."

The show's season concluded two weeks ago and, based on her experience, Rogers said she is open to returning for another season.

"I think I'm better prepared now, and I know more of what to expect and how to finagle things when it comes to reality (TV). I have a story to tell, and I don't think that season one was enough time to tell the entire story.

"So I'll definitely sign up for season two," the Canton native said.

"I was definitely one of those people who nothing right ever happened to. I actually cried because at that moment, it's like the people they're actually watching," she said. "My nieces come up to me and tell me like, 'Hey auntie, I'm so proud of you. I want to be like you when I grow up.' It was just another accolade."

Rogers' success shows that you don't have to leave home to be successful. She said she doesn't understand why people feel they have to go outside the state when they can practically go underground and become successful if they're consistent and tenacious, she explained.

Although she may get a condo out of the state, there is nowhere else she would rather live than in Mississippi, paying her taxes and giving back to her community, the entrepreneur said.

"I just want little girls to look at me and see me as them. Be consistent and know that all things are possible. If this girl can do it, then so can they," Rogers said. "I want people to look at me and think, 'She was an amazing woman—a woman of God, a woman of giving, just a great spirit. One of the greatest.'

"That's what I want my legacy to be," Rogers added.