The Man Behind the Column: Exploring Eric Stringfellow and His Legacy | Jackson Free Press | Jackson, MS

The Man Behind the Column: Exploring Eric Stringfellow and His Legacy 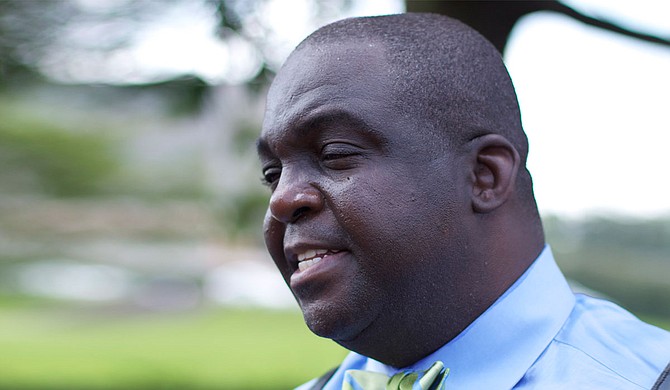 Journalist and former Clarion-Ledger columnist Eric Stringfellow has passed away at the age of 59 after a brief battle with cancer. The 1982 Jackson State University graduate was best known for his unflinching honesty and passion for journalism.

He started his journalism career at The Commercial News in Danville, Ill., as an intern and then general assignment reporter. He moved back to Jackson and worked for the Clarion-Ledger, taking on three roles as an assignment reporter, City Hall reporter and the county government reporter before returning to Ohio to work for the Cleveland Plain Dealer.

Stringfellow would later return to the Clarion Ledger as an editor with his own column, which he's best known for. Outside of his job at the Ledger, Eric was also an adjunct professor at Jackson State and the University of Mississippi, and he established the Department of Mass Communications at Tougaloo College.

He's won several awards for his work as a professor and writer and has served on the boards of different organizations. To the everyday Jacksonian, Stringfellow was the brutally honest, yet entrancing columnist you'd read in the paper. But outside of celebrity, he was a loving father, a dedicated mentor and professor, and a great friend.

Eric Stringfellow not only leaves behind his words, but a legacy that lies in impacting lives and a desire to see the city of Jackson and its residents thrive.

Although he lived in Cleveland, Ohio, Courtney Stringfellow, Eric's son, remembers his father's frequent trips back to Jackson. Courtney said he would have to share his father with others, but he would get all the alone time he wanted during their 18-hour drive from Jackson to Cleveland. They established a routine for their trips, he said.

"We would drive to Memphis and stay at a cousin's house. From Memphis, we would drive straight through from there," Stringfellow told the Jackson Free Press. "Cincinnati would be all lit up at night. Just the conversations we would have, us listening to music, us singing together and me having him all to myself."

Courtney said it's one of his fondest memories of his father, a man he describes as confident, no-nonsense and truthful. "If you wanted to hear the truth about something or you asked his opinion, he'd give you the truth whether you wanted to hear it or not. Whether it hurt your feelings or not," he said.

This was exemplified in his column with the Clarion-Ledger, which allowed his father to be uncensored and transparent at the expense of ruffling a couple of feathers.

"He would hold people accountable, and people don't like you to do that, especially in a public forum. And he didn't care," Courtney said.

His passion for journalism was matched with his love for the city of Jackson and his desire to make it better, his son said. He was involved in mentoring and community service, which won him awards from Alpha Phi Alpha and Phi Beta Sigma.

"He touched a lot of lives. His legacy would have to be perseverance. He had me at 19-years-old and it didn't stop him from doing anything he needed to do. He was still well accomplished," Courtney said.

"You want to give people something to be proud of when they mention your name and when he left here, he left a legacy to be proud of."

LeMia Jenkins, former student and mentee of Eric Stringfellow, heralds him as a visionary, a doer, a one of a kind man that was passionate about his craft. Jenkins was a student at Tougaloo College when Stringfellow built the Mass Communications department, she said.

'When he came in, he made sure there was a tv focus, a PR focus, that there was a marketing focus and he really had the foresight to see the direction that mass communications was headed in because of his experience," Jenkins said. "I don't think the department would be where it is without his vision, his frank action and blood, sweat and tears."

She said Stringfellow was the type of professor who was in early and stayed late and one who would give constructive criticism to help students hone their craft. "He really taught us how to be journalists, how the industry works and really how to survive and thrive in a changing field and economy," she said.

As her mentor, Stringfellow said he really helped to push her towards opportunities that would help her master communications. He encouraged her to write for the newspaper because he was confident in her writing ability, and he was one of the reasons she worked at a television station because he knew her interests, she said.

"Because of him and my aunt, I am where I am today," said Jenkins, who now works in media relations. "Throughout the years, he's been someone I've been able to call for counsel. He's one of the people I would pick up the phone and call and say, 'Hey, what do you think about this opportunity?'"

Jenkins said she believes the next generation of journalists and mass communicators are better served having Eric Stringfellow as a role model and an influencer.

"I definitely think his legacy will live on. I don't know that there will be another Eric Stringfellow and I'm just happy and honored that I was able to learn from him and benefit from his wealth of knowledge," she said.

Margaret Walker Center Director Robert Luckett became friends with Eric Stringfellow from their work together on various projects at JSU. One of those projects included the establishment of the school's Sports Hall of Fame, where Eric served as the chairman.

Luckett said what he appreciated about Stringfellow the most was his advice and that he led by example. "I knew I could call Eric and get the straight deal. If there was an issue that we were facing as a center, I knew that I could talk to him and get real, honest advice on ways to move forward," he said.

Luckett said he always remembered Eric acting in a world class, professional manner and that he never saw him upset.

"It's just devastatingly sad and to lose someone like that in the time that we find ourselves, particularly at Jackson State right now. He represented all the good things that was Jackson State," the director said.

Earl Sanders said you either loved or hated Eric, but most of all, you respected him. Eric and he met briefly at Jackson State, but officially reconnected when Stringfellow began working at Tougaloo College. He described Eric as someone who never let people get comfortable, which Sanders happened to be on the receiving end of at one time.

"He brought me on as a selection committee member at the JSU Sports Hall of Fame. When I came on, he was the chair," Sanders said. "Without me knowing, he said, 'I'm going to introduce you to the new chair of the selection committee, Earl Sanders.' He looks at me, and I look at him, and I'm like, 'Dude, we didn't talk about it.'"

The position wasn't one that Sanders wanted, but Stringfellow encouraged him to take it and supported him throughout his tenure.

"He had enough respect for me to say we have to get you from behind the shadow and put you up front. I thought I wasn't going to be able to do it, but I did it for about four years. It was definitely a growing moment for me," he said.

Eric's legacy can best be defined as what you saw was what you got, Sanders said. "He'll be missed. He was very abrasive, but at the same time he was gentle," he said. "It's kind of one of these situations where if I care about you, that's why I have to be so abrasive with you."