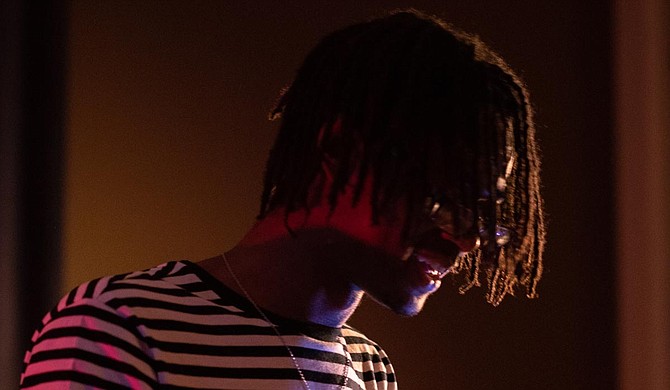 The smell of coffee and pie immediately hits the senses when walking into the Urban Foxes, a coffee shop near downtown Jackson, on Jan. 16. Green walls and a tiger-themed chair tucked in the dining area's corner grace the eyes. In the performance room, sitting on the adjacent wall, is acclaimed singer Nina Simone. She's painted on a blue background shaped like the state of Mississippi.

It is the singer-songwriter showcase for Jackson Indie Music Week, a seven-day music festival that celebrates independent artists and the legacy of Mississippi being the birthplace of America's music. "It's a platform for independent artists to showcase their talent, an economic driver for the city and state, and it's just where people can come and see the best Mississippi music," Media Relations Director Rachel James-Terry says.

Bradley Davis is the first performer, and he has told only one of his college buddies about his secret life as singer Laeland. So when his classmates discover this article, they'll be in for a surprise, he tells the Jackson Free Press.

A sophomore majoring in vocal performance, Laeland said in high school he was always known for his singing, so he enjoys just blending into the crowd at Tougaloo. "I'm just another guy, and I really like being treated like that. I really like the compartmentalization of I'm going to treat you like Bradley Davis, and I get over here, and I'm going to treat you like Laeland," the singer-songwriter says.

For the night, Bradley takes a backseat to Laeland, who is dressed in black and white, accented with red high-top Vans. He makes occasional visits to his laptop to play his music, with song after song showing a pattern of downbeat, melancholic sounds. It's a genre of music he discovered while on YouTube, he says.

"The music and genre itself is (a) very low-fi, sub-genre of music. The lyricism has always been the trademark," Laeland says. "I think that type of music and those type of lyrics really help relate and help us figure out this is how I feel. It's sad, but it makes us feel better afterwards."

He performs an unreleased cut, "Away From Today," that has a bass- and pop-infused sound, but maintains cadences of sadness as the lyrics detail his doubts in himself.

As a songwriter, Laeland says he finds that he can relate more to the songs he writes. "When I write music, and I write it for myself, then I have a story that goes behind it. Someone else singing would be their way of singing. It wouldn't be my story," he says.

As an independent artist, grassroots venues like Jackson Indie Music Week give artists a platform to perform and network where they wouldn't be able to otherwise, Laeland says.

"The panels that they do, the showcases that they do, I think are extremely important for indie artists in particular because we are starting to become more popular now that the Internet is such a prevalent thing and you don't need a major record label," he says.

With one of his songs just shy of 2 million streams on Spotify and another song signed to Sony Music, the independent life is suiting Laeland just fine.

But as the tempo of Warnick's guitar switches, the audience is immediately back in the present as he performs "Friends," a song from his 2019 debut album "Treehouse." The Tupelo, Miss., native, who played in his church choir and learned songwriting through poetry, says he used songwriting to cope with the transition to Mississippi College.

"Eventually, I was able to write a few songs that I liked and my friends were like, 'dude, you've got to record these songs.' I got asked to play a bunch of events at Mississippi College for different organizations and just started playing live music and decided I wanted to record," Warnick says.

He learned rhyme and meter from his middle-school and high-school English teachers, but there isn't an exact formula to songwriting, he says.

"For me in writing my songs, I get to sing the words that I mean and write the story that I want to tell through the song that I get to perform, which I think there is value in every part of it," the singer-songwriter adds.

The musician is in his last year of college, majoring in interpersonal communication and minoring in music, and it can be difficult to balance school, an internship and making music, he says.

"I try to write a song a week, right now that's where I'm at. I try to practice guitar for about 30 minutes a day," Warnick says.

But in his words, you make time for what you care about and though he could quit school entirely, he finds value in an undergraduate education.

Warnick says he started recording with Shelly Enn, owner of Crown Studios, in January 2019, after playing him some songs. What initially started out as a four song EP morphed into Treehouse, a 10-song album, with a little bit of fundraising and financial support from his grandparents, he says.

"I learned a lot about working with other people and the importance of mixing music, that the creation of a song isn't just chord progression and the lyrics as I play it myself, but it's every element that goes into making a track and the attention to detail," the singer-songwriter says.

As a first-timer to Jackson Indie Music Week, Warnick says he enjoys the intimacy it employs, giving him the opportunity to see the audience's face and interact with them.

"This is an awesome platform for musicians to really share this art form they're creating and also to express themselves with other people and connect with other people through it. That's valuable," Warnick says of Jackson Indie Music Week.

Brad "Kamikaze" Franklin founded the festival; this year's January festival was the fifth.

"We're pleased with the amount of turnout that we have, the talent that keeps growing, the diversity. It's a beautiful. We just want to keep doing for as long as everybody wants us here and wants it to happen," James-Terry says.