Dark Songs of the Bloodbird 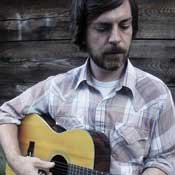 Adam Harrington, who performs as Bloodbird Harrington, takes on dark themes in his songs, embellishing them with his deep voice and blues-influenced guitar playing.

Bloodbirds are found in Australia, not Mississippi, but there's one here who sings only in the dark. Adam Harrington, who performs under the name Bloodbird Harrington, is a Jackson-based singer and songwriter who wrestles with a number of dark themes in his music.

His original songs are structured around his voice, ominous and occasionally deep, bringing to mind singers like Nick Cave or Mark Lanegan. Harrington accompanies his singing with a fingerpicked acoustic guitar, and a back-up drummer.

Harrington grew up in Laurel in a musical family. His grandfather owned a music store, and his father played bass for blues musicians. Harrington also heard a lot of blues-influenced rock, including the Allman Brothers, around the house.

His grandfather gave him his first guitar lessons when he was 10, but he didn't get serious about music until he found punk rock as a teenager. When he was in his teens, Harrington joined Aerosol Junkie, a "typical punk-grunge" band. They performed at the American Legion Hall. "We'd rent it out for $200, and it would be packed with kids," he said. "All the veterans would be in the bar in the back of the building. They would kind of peek in (on us) every now and then."

Harrington set his guitar aside while he attended Jones County Junior College. After graduating, he moved to Jackson in 2002 for work. Rather than finding another punk band to join, the guitarist went in a new musical direction.

"I picked up the acoustic guitar and started playing more folk kind of music," he says. "Mostly because I didn't know anyone around here. It was just 'All right, I'll play acoustic until somebody comes along.'"

He began listening to acoustic musicians, including traditional Mississippi bluesmen like Skip James and contemporary indie folk artists like Bill Callahan. Harrington takes the minor key guitar tunings from '30s blues and incorporates them into minimal arrangements that support his distinctive, deep voice. His guitar parts come first, with the lyrics following quickly after. "It's almost a Hank Williams approach," he said. "If you can't write it in 20 minutes, it's not worth writing about."

Harrington spent several years at home honing his sound, not stepping on stage under the "Bloodbird" moniker until 2009. He started out playing shows in Hattiesburg and on the Gulf Coast. Early on, the name caused some confusion about his music. "I used to get booked on heavy-metal shows just because of the name," he said. "That got kind of annoying."

He began his first CD, "Stained Glass Memories," in 2010. Released in May 2011, it features moody songs that tell unsparing stories of betrayal and revenge. The disc also features Gordon Garretson, formerly of Delicate Cycle, playing drums on a couple of the tracks.

Amid wrecked relationships detailed on the album, Harrington makes an unexpected lyrical detour. "Rollin' on my 63's" has the same dark vocal delivery and sparse arrangements, but it relates the travails of an aging skateboarder. "I may not be walking when I'm 40," the song says, but he'll go on "as long as I've got urethanes (wheels) below me." The song, possibly the first dark-folk skater tune, reflects Harrington's re-dedication to skateboarding. A teen skater, he recently returned to the sport and has been active with SkateMS, the skateboarding advocacy group based in Jackson. The group included "Rollin' on my 63's" on "Kids Need Fresh Air," their fundraiser CD.