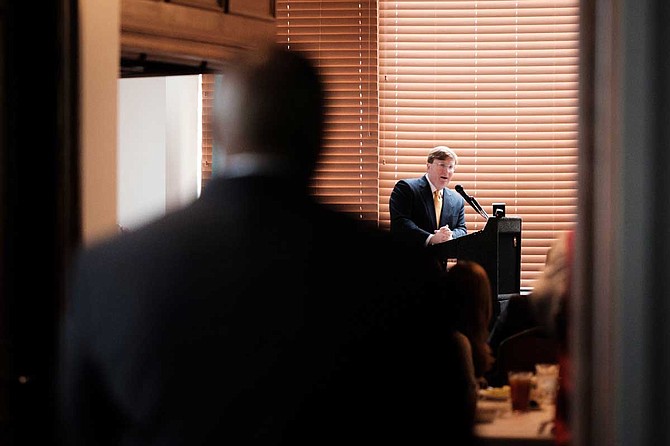 Despite a new poll showing that large majorities of Mississippians support Medicaid expansion, Mississippi Lt. Gov. Tate Reeves said Monday that he opposes it. He is running for governor in 2019. Photo by Ashton Pittman.

JACKSON — After weeks of speculation that Mississippi's Republican leadership might support expanding Medicaid in the state, Lt. Gov. Tate Reeves slammed the door shut on Monday.

Political insiders in the state had speculated that Reeves, who is running for governor, might support passing a limited form of the popular policy to stave off challenges from his right and left. On Monday, though, he said he does not believe it would be "in the best interests of our taxpayers."

Mississippi lieutenant governors have broad legislative powers because they also serve as the president of the Senate. That makes it unlikely any form of Medicaid expansion will pass this session with Reeves still holding the office.

State Rep. Robert Foster, R-Hernando, is challenging Reeves in the GOP gubernatorial primary. While Foster is to the right of Reeves in terms of rhetoric, he is running in support of Medicaid expansion, which he calls "Medicaid reform."

"When it comes to our Medicaid program, pursuing real Medicaid reform is no longer a question," Foster's health-care platform on his website reads. "200,000-300,000 hard-working Mississippians and $1 (billion) - $2 billion dollars are being left off the table each year."

When President Barack Obama signed the Affordable Care Act into law in 2010, it included a provision requiring states to expand Medicaid. The federal government would pay 100 percent of the cost of state expansions for the first several years, then 90 percent in later years.

Since the governor first rejected the expansion in 2013, not only has it blocked around 300,000 working Mississippians from coverage options, but it has helped facilitate the closure of five hospitals in the state.

If Reeves succeeds in the GOP primary for Bryant's position, he will likely run into the issue once again. When he announced his run for governor in October, Democratic Attorney General Jim Hood made it clear that Medicaid expansion would be a centerpiece of his campaign. The hospital in his hometown of Houston, where he made the announcement, closed its doors in 2014.

A 2015 Mississippi Institutions of Higher Learning study found that, after federal contributions to state expansion dropped to 90 percent, Medicaid expansion will cost the state $100 million to $150 million per year. The study estimates that as many as 313,000 Mississippians would gain coverage.

If the State continues to reject Medicaid expansion, it will have given up $14.5 billion between 2013 and 2022 that the federal government allocated for the state's expansion, an analysis from healthinsurance.org notes. Mississippi taxpayers, meanwhile, will have paid in $1.7 billion to fund expansions for other states.

On Jan. 11, Mississippi Secretary of State Delbert Hosemann, who is running for the Republican nomination to succeed Reeves as lieutenant governor, told the Jackson Free Press he has been "looking at" ways to expand Medicaid and pay for it.

"Basically, what we want to do is make sure the expansion is paid for without breaking the budget in the state for everyone else," Hosemann said.

While conditional, Hosemann's expressed openness to Medicaid expansion is the most supportive comment from a statewide-elected Republican to date.

Polls for years have found a slight majority of Mississippians in favor of Medicaid expansion, but Monday's survey, by Democratic pollsters, represents a new high. In a 2014 Public Policy Polling survey, a bare 51 percent supported it.

Though Bryant called expansion a "fool's errand" several years ago, and Republicans argued the additional cost would mean cuts to education and infrastructure, that has not stopped them from from cutting those budgets anyway. Those cuts came after Republicans slashed taxes by more than $400 million in 2016, including $260 million a year for corporations.

After reports surfaced that Bryant wanted to find a way to expand Medicaid without calling it "Medicaid expansion," House Minority Leader David Baria, D-Bay St. Louis, told the Jackson Free Press he would be eager to work with Republicans.

"I don't care if you call it Philcare—it's just a name," he said on Jan. 4. "But we need to get serious about providing health care to our working poor who don't have any health insurance and about helping our rural hospitals—many of which are failing. And the other aspect we're talking about here would be job creation. It's been estimated that we could create 8,000 or 9,000 jobs if we would simply accept our tax dollars back."

Baria pointed to Louisiana as an example of the benefits of expansion. A year after the state expanded Medicaid in 2016 despite initially rejecting it, a report from Louisiana State University and the Louisiana Health Department found that expansion had saved the state $317 million and created 19,000 new jobs. More than 470,000 people gained health coverage—100,000 more than anticipated.

Monday's Millsaps-Chism survey of Mississippians made interviewees aware of the possible benefits of expansion for the state.

"States that have expanded Medicaid have seen increased insurance coverage for low-income, uninsured citizens and greater financial stability for rural and small-town hospitals," the survey told interviewees. "Would you support or oppose expanding Medicaid in Mississippi?"

The poll found a strong partisan split, but there are more than four times as many Republicans who support expansion as there are Democrats who oppose it. Ninety-one percent of Mississippians who lean Democrat support it, along with 94 percent who describe themselves as a "strong Democrat." Among voters who lean Republican, support drops to just 35 percent, and further to 32 percent among self-described "strong Republicans." Fifty-eight percent of likely voters who identify with neither party support expansion.

Most support expansion across all age groups, with support highest among those 18 to 34 at 64 percent, followed by those age 55 to 64 at 63 percent. Only likely voters 65 and older support it by less than a majority, with those 65 and older supporting it 48-39.

Women are more likely to support expansion than men, with 59 percent in favor to 29 percent opposed. A majority of men favor expansion too, though, 54-36.

A majority of likely voters in Mississippi said they support expansion regardless of education level.

The poll interviewed 687 likely voters in Mississippi from Jan. 2-4 and has a margin of error of +/-3.74 percent. 59 percent of interviews were conducted by landline phone, and 41 percent by cell phone.