Election-Year Lawmaking: What Will Happen? 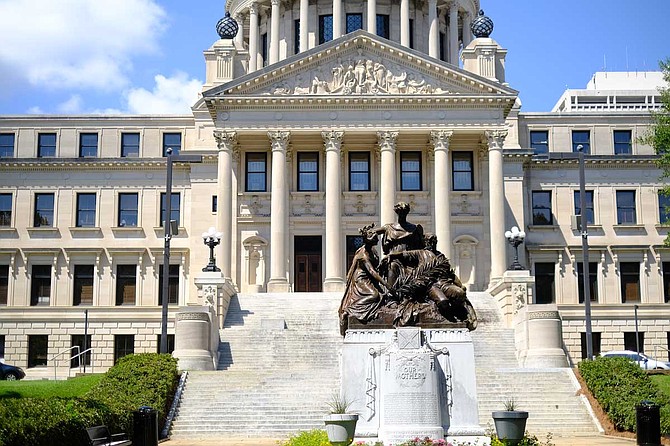 With 2019 being an election year, Sen. Chris McDaniel, R-Ellisville, says to expect a fairly uneventful session. Photo by Ashton Pittman.

JACKSON — "Let tell you, some of you may have a beautiful fan," Republican Mississippi Gov. Phil Bryant told the crowd gathered before him at the Neshoba County Fair last August, holding up a paper fan with various numbers printed on it. "Now this is a fan that has the truth on it."

Bryant was incensed. Earlier, Democratic Mississippi Attorney General Jim Hood had stood at the same podium and discussed Mississippi's dismal national rankings in things like health care, poverty and education. Republicans such as Bryant and Lt. Gov. Tate Reeves, Hood said, would try to tell voters everything was just fine.

"You're going to hear a lot of that yapping over the next few days, how low unemployment is" and "how great things are," Hood had said. "You know about statistics and lies and damned lies. You'll hear a lot of that."

Standing before the crowd, Bryant waved the fan, touting Mississippi's 4.7 percent unemployment rate. That was a big drop from 9.4 percent when he took office and Mississippi was still reeling from the Great Recession,  Bryant boasted.

Republicans have reason to emphasize the good: For the first time in a long time, they expect to face a strong Democratic contender in this year's governor's race with Hood, who announced a run in October, and that's likely to shape how they approach the  Legislature this year.

Conventional wisdom says not to expect the Legislature to do too much in 2019 because it's an election year.

"You're not going to see a lot of aggressive moves one way or the other," State Sen. Chris McDaniel, R-Ellisville, told the Jackson Free Press on Jan. 3.

Still, legislators could tackle some issues that are broadly popular and have bipartisan support that could be a boon to them in November's elections. One possibility, though, could prove controversial among Republicans.

After President Obama signed the Affordable Care Act in 2010, then-Lt. Gov. Phil Bryant went to war against the law he derisively refers to as "Obamacare," teaming up with Sen. McDaniel in hopes of getting it struck down.

Though that effort failed, and Mississippians of certain income levels now have access to subsidized insurance through the ACA's federal marketplace, the Supreme Court ruled that states could choose whether or not to accept federal funds to expand Medicaid.

Once he became governor and was eager to defy Obama at every turn,  Bryant in 2013 turned down more than $400 billion in yearly federal funds to  expand the program.

That decision denied health-care access to 300,000 Mississippians whose income is too high to qualify for regular Medicaid, but not high enough to qualify for federal subsidies. It has also been devastating for rural hospitals in poor areas that rely on Medicaid reimbursements, with five closing in  the five years since.

In a statement on Jan. 4, Sen. Derrick Simmons, chairman of the Mississippi Senate Democratic caucus, said Medicaid expansion would be a priority Democrats would push in the  2019 session that reconvened Jan. 8.

Democrats are in the minority in both houses and would need Republican support to move legislation on Medicaid expansion, but in his quest for the governorship, Hood has already signaled his intention to make Medicaid expansion a central issue in the campaign.

"We had an emergency room here in Houston my whole life, and now that emergency room is closed," Hood said at his campaign announcement. "In 1940, we had better emergency health care in rural Mississippi than we have right now. That's insane."

The issue could be popular for Hood, who is likely to do battle with Republican Lt. Gov. Tate Reeves in November if both win their party's nominations. A Millsaps-Chism Strategies poll last April found that 52 percent of Mississippians support expanding Medicaid, with just 36 percent opposed.

Last month, the governor's office denied reports that Bryant and Republicans in the Legislature were "trying to figure out how to expand Medicaid without calling it expansion," as a source told Politico. But a curious tweet on Jan. 1 from Mississippi Executive Medicaid Director Drew Snyder fueled suspicions that Bryant and Republican lawmakers may be considering their own version of Medicaid expansion to kneecap Hood's central campaign issue.

“I don’t care if you call it Philcare,” Mississippi House Democratic Minority Leader David Baria said, inviting Gov. Phil Bryant and Republicans in the Legislature to expand Medicaid this session.

Democratic House Minority Leader David Baria, a longtime advocate for Medicaid expansion, said that if Bryant is willing to do something "to help Mississippi's working poor," he will find willing partners on the Democratic  side of the aisle.

"I don't care if you call it Philcare—it's just a name," the Democratic leader from Bay St. Louis told the Jackson Free Press on Jan. 4. "But we need to get serious about providing health care to our working poor who don't have any health insurance and about helping our rural hospitals—many of which are failing. And the other aspect we're talking about here would be job creation. It's been estimated that we could create 8,000 or 9,000 jobs if we would simply accept our tax dollars back."

Baria pointed to Louisiana as an example of the success of  Medicaid expansion.

After that state replaced an anti-expansion Republican governor with Democratic Gov. John Bel Edwards, the state expanded Medicaid in 2016.

A year in, a report from Louisiana State University and the Louisiana Health Department found, expansion had saved the state $317 million and created 19,000 new jobs, even as more than 470,000 people gained health coverage—100,000 more than anticipated.

The impact on people's lives was tangible, too: Of those who gained coverage in the first year of the expansion, nearly 50,000 people began outpatient mental-health treatment; almost 20,000 began treatment for substance abuse; 7,000 were newly diagnosed and treated for diabetes; 338 women who gained insurance through expansion were diagnosed with breast cancer; and 285 people were diagnosed with and treated for colon cancer.

"You look next door in Louisiana. They provided health care to their working poor, and their hospitals aren't failing," Baria told the Jackson Free Press.

Bryant may or may not be seriously considering Medicaid expansion—or "Philcare"—this legislative session, but whether he does or not, it will certainly be an issue heading into  November's state races.

Last year, Bryant vetoed a criminal-justice reform package that included provisions aimed at helping opioid addicts. Bryant opposed the bill because of a provision that would have required the Mississippi Department of Corrections to factor in poverty for those on probation or supervision before  assessing monthly fees.

In the past, Bryant, who has a history in law enforcement, has not been known as a supporter of criminal-justice reform generally, and has emphasized tough-on-crime and pro-capital  punishment stances.

Mississippi still has the fourth-highest incarceration rate in the nation, and data from the Vera Institute show that the number incarcerated rose 1.3 percent from 2016 to 2017.

"Our criminal-justice system needs more revamping so our jail populations are reduced and taxpayers' dollars are saved and reinvested," Simmons said. "Non-violent and low-level offenders should be rehabilitated, and released back into society with dignity  and respect."

Bryant has developed a reputation in the first two years of the Trump presidency for signing onto just about everything Trump does. If he really has had a change of heart about criminal justice reform, he could push for the Legislature to take the issue up again in 2019. Baria hopes he will.

The Democratic leader said he has already filed a bill that would restore voting rights to any person who has completed their sentence. Criminal-justice reform, he said, is one of the key topics his party plans to focus on.

"We're going to work across the aisle to get some things done, and it's going to be directed at trying to reduce the populations of incarcerated persons in our state, properly addressing the problems of bail, and things like fines  and fees," Baria said.

Mississippi teachers made $44,659 on average during the 2016-2017 school year, Mississippi Department of Education figures show. That puts the state last nationwide in teacher pay, behind states like Oklahoma and West Virginia, where teachers have recently gone on strike to protest low pay.

Bryant is asking lawmakers for $50 million to fund a 3-percent pay increase for teachers over the next two years. Even if the Legislature approves that request, an Associated Press analysis found, it would still leave Mississippi in last place, with salaries increasing an average of $1,580 between  now and 2020.

When Mississippi last raised salaries for teachers in 2014, salaries increased by $2,500 for each teacher over a two-year-period.

Simmons blasted Republicans for not doing more on education  in other areas. "In recent years, we have fought to get every dime we could for public education while our Republican counterparts created special programs and scholarships designed to siphon every dollar they can away from public schools," he said. "We want public tax dollars going to public schools."

Last year, Republicans unsuccessfully pushed a proposal that would have vastly expanded the use of school vouchers, redirecting tax dollars from public education to private schools under the banner of "school choice." It is not a new strategy. The State of Mississippi provided vouchers to white parents who enrolled children at segregation academies in the 1960s and '70s.

Democrats also cited election reform, "economic justice" like equal pay for equal work for women, and infrastructure as issues they will push in the new legislative session.

Mississippi House Rep. Jeramey Anderson, D-Moss Point, urged the Legislature to work to pass meaningful legislation in 2019, instead of playing it safe because it is an election year.

Though McDaniel doubts there will be much appetite for legislators in either party to "rock the boat" this year, Mississippi House Rep. Jeramey Anderson, D-Moss Point, urged his colleagues to pass meaningful legislation, anyway.