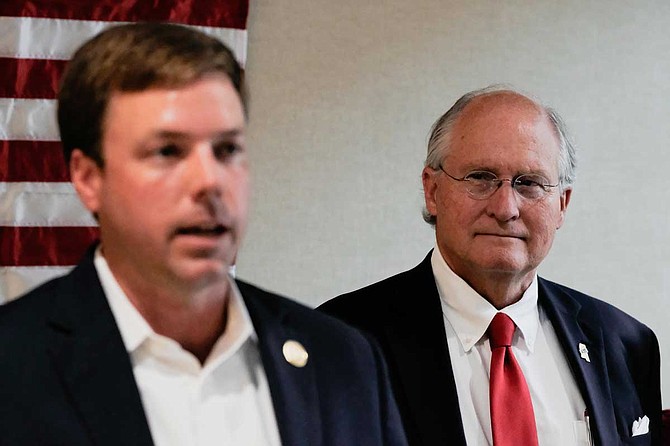 HATTIESBURG, JACKSON, Miss.—In a series of campaign stops for the Republican runoff for governor on Tuesday, former Mississippi Chief Justice Bill Waller reiterated his views on health care and education, while also sharing his thoughts on equal pay for women and LGBT hate crimes.

In Hattiesburg, a local bartender and a former resident several hours away were both the victims of alleged anti-gay beatings just days apart earlier this year. Hattiesburg American reporter Lici Beveridge asked Waller if he supports updating the state's hate-crime laws to include LGBT and disabled people.

In this year's legislative session, local Mississippi House Rep. Missy McGee, a Republican, joined several other legislators to push for an LGBT-inclusive hate-crimes law. Committee chairs in both houses blocked the bill from consideration, though.

In the Legislature, the House speaker and the Senate president appoint committee chairs and can leverage their power to get bills they want brought to the floor. In Mississippi, Lt. Gov. Tate Reeves, Waller's runoff opponent, serves as Senate president.

In Hattiesburg, the Jackson Free Press reporter Ashton Pittman asked Waller if he supports the Evelyn Gandy Fair Pay Act, which would "prohibit discrimination ... against any employee on the basis of sex by paying a salary or wage to such employee at a rate less than the rate paid to its employees of the opposite sex for equal work on jobs that require equal skill, effort and responsibilty to perform." Legislative leaders have also blocked it repeatedly in recent years. His answer was unclear.

His team did not allow time for a follow-up, as he had to be in Jackson in about an hour-and-a-half.

Once in Jackson, though, Jackson Free Press reporter Aliyah Veal followed up, asking again about Waller's views on equal pay. In May, Mississippi became the only state in the country without an equal pay law after Alabama Gov. Kay Ivey signed theirs into law. Veal pointed that out in her question to Waller. This time, Waller answered more clearly.

"Absolutely. Mississippi needs to adopt that, and that was killed in the Senate, by the way," he said, elaborating no further.

Mississippi House Rep. Robert Foster, who came in third in the Aug. 6 GOP primary, was traveling with Waller on Tuesday. He endorsed him that morning at a stop in Hernando, Miss., Foster's hometown. In Jackson, Foster reiterated his endorsement, criticizing Reeves for focusing too much on national issues and not enough on those that affect Mississippians.

With hospital staff surrounding them in Hattiesburg, Foster explained that one of the key issues is Waller's support for Medicaid expansion, which he and Waller refer to as "Medicaid reform."

Since the Affordable Care Act's implementation in 2013, Gov. Phil Bryant and Reeves' resistance to President Barack Obama's signature health-care law has caused the State to forego billions in federal funds that Mississippi could have used to expand Medicaid. Not only has it kept a large number of Mississippians from having realistic health-care options, but it has also imperiled already-struggling rural hospitals that would see a boost if more Mississippians had access to Medicaid. Five rural hospitals have closed in the state since 2015, due in part to the state's decision to forego expansion.

Foster and Waller, however, call it "Medicaid reform"—messaging designed to make it easier for Republicans to accept the idea of Mississippi implementing a major component of Obama's law. Reeves, though, remains completely opposed.

At the July 23 televised Republican debate, Reeves declared that he was "the only conservative" on the stage and repeated his opposition to expansion, which he calls "Obamacare expansion." Foster shot back, saying that while he thinks "Obamacare" was a bad thing, Reeves' rejection of billions of dollars to bring health care to more Mississippians is out of touch.

"It's hard for somebody like the lieutenant governor to understand this because he's been on the government rolls the last 16 years of his life and had everything handed to him by the taxpayers in Mississippi," Foster said.

At Tuesday's second stop, Hattiesburg Clinic Executive Director Tommy Thornton, who introduced Waller, said his plan to expand Medicaid would save rural hospitals, and help bigger hospitals and clinics, too. 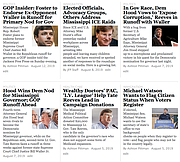 "Justice Waller has demonstrated to us an understanding of the issues facing our citizens access, or lack of access to health care and our hospital's financial pressure," Thornton said.

In Jackson, Waller talked more about his views on Medicaid.

"The other side says we don't need anything else. I say we got 31 failing hospitals," he said. "There are very easy solutions. What (Vice President) Mike Pence did in Indiana. What they've done in Arkansas is proven, got a track record. As Representative Foster said, we're already one of the highest Medicaid states in the nation. Why not put the working poor in there?"

"Why not make it advantageous for someone on welfare to go to work without losing all their benefits? That's how you move people into the workforce. That's how you increase your workforce development. That's how you get more people on the payroll, more taxes, more pay for teachers."

At the Hattiesburg Clinic, Foster praised Waller for his policy offerings.

"One thing that's very important to talk about is that myself and Justice Waller have been talking for the last eight months about actual policy and about how to help fix some of the biggest issues facing Mississippi," Foster said. "We have a third opponent in this race who has done nothing but spend almost $6 million now to bash us personally and talk negatively about us and our campaigns, but has brought no solutions to the table to fix some of the biggest problems facing our state," Foster said, referring to Reeves.

In a press release earlier that day, Foster criticized Reeves for spending a "considerable amount of time on national issues" instead of addressing Mississippi's issues.

Reeves has focused social media ads on touting his support for recent federal immigration raids in the state, his support for Trump, and his disdain for the four out-of-state congresswomen who make up the group known as "The Squad." He has not offered a health care alternative to Medicaid expansion, though, saying only that he will help grow the Mississippi economy, which will bring health care to more people. The only specifics he has offered on health care, announced in a July 12 press statement, include plans to offer incentives to physicians to locate in underserved areas and to businesses that contribute to rural hospitals.

Mississippi continues to lag behind the rest of the country economically. After eight years as lieutenant governor, Reeves had begun touting the fact that Mississippi's unemployment rate was at historic lows earlier this year. That number ticked back up to 6% last month, though. Mississippi now has the second highest unemployment rate in the country, after only Alaska. Sister states Louisiana and Alabama fare better, at 5.3% and 3.5%, respectively.

"Our campaign has got real solutions and the other side doesn’t," Waller said in Jackson on Tuesday. "The other side is strictly a one sound bite, one attack after another (operation)."

"If you voted in the Republican primary, you cannot vote in the Democratic primary in three weeks and vice versa," Hinds County Republican Party Chairman Pete Perry told the JFP on Aug. 7. "If you did not vote, you can vote in whatever primary."

After voters decide, the GOP nominee will face Hood on Nov. 5. Current Mississippi Treasurer Lynn Fitch and Madison attorney Andy Taggart also go head-to-head in a runoff in the GOP race for attorney general on that day, as well as runoffs in a number of Jackson-area legislative and Hinds County races.