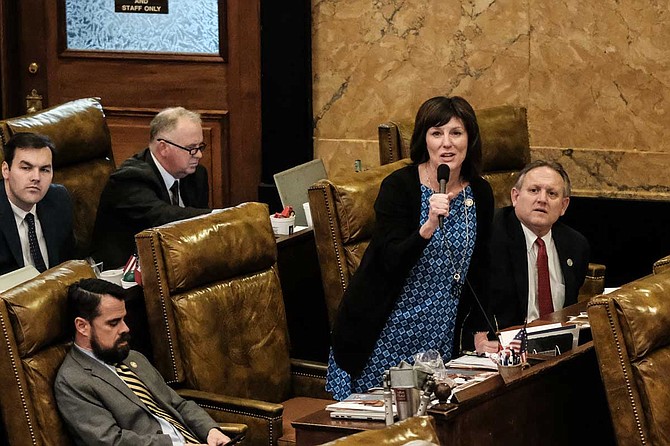 Waynesboro native Trevor Gray, 28, is known as a nice guy whose family taught him to see and expect the best in others. But on April 17, after moving back home to his smaller hometown from Jackson, he struck up a conversation at a local Wayne County bar that would challenge many people's faith in strangers.

He had started talking to two men at the bar—Landon McCaa, 32, and Toman Sion Brown, 28. When the bar closed, police say, McCaa invited all the patrons to his home for an after-party.

What happened next—which many believe was a hate crime because the men believe Gray was gay—was caught on viral Facebook video. One man reached out to apparently shake Gray's hand, but suddenly punched him instead. That man then pushed Gray to the ground, yelling while he kept punching him, as a second another man watched. Word is that the two men were heard screaming slurs at him because they believed him to be gay, even though he is not. Police later charged both McCaa and Brown with aggravated assault, the felony charge for attempted murder in Mississippi.

"Thinking about it, seeing the images of it, I don't and will likely never understand it," Gray told the Jackson Free Press earlier this month. "All I know for sure is that it won't change who I am. There is always a bright side, always a positive in any situation. I have always believed this, maybe to a fault, but that's just who I am."

Meantime, the two alleged attackers could face hate-crimes charges after the filmed beating of Gray. Federal investigators in south Mississippi are probing whether or not the alleged assailants indeed beat him based on the false belief that he is gay. His injuries required surgery to fix a broken jaw.

'We Will Not Stand for It'

Now, a Mississippi Republican is calling on her colleagues to support an update to the state's hate-crime laws in the wake of two recent attacks, including the attack on Gray, that she believes anti-gay prejudice may have motivated. Gray attended the University of Southern Mississippi, which is part of McGee's district.

On Saturday, April 27, McGee shared a Facebook post from a different attack believed to be for the same reason.

The Jackson Free Press is neither identifying the attacker nor the alleged victim because he has not filed charges. In her Facebook post, McGee wished him a "speedy recovery."

"Do not give up because this kind of behavior does not represent Hattiesburg," she wrote. "We will not stand for it."

In this year's legislative session, which recently ended, McGee co-sponsored a bill to update state hate-crimes laws to include sexual orientation, gender identity and disability. Rep. Abe Hudson Jr., a Democrat from Shelby, introduced the bill. Only one other House member co-sponsored it, Rep. Steve Holland, D-Tupelo. In February, the bill died in the Judiciary B Committee without ever getting a vote. Rep. Angela Cockerham of Magnolia, who recently switched from the Democratic Party to become an independent, chairs that committee.

A similar Senate bill, which also had a bipartisan group of sponsors, did make it out of the Senate Judiciary A Committee this year, and on a unanimous vote. It also died in the Senate Corrections Committee, which Rep. Sampson Jackson II, D-Preston, chairs. Similar efforts to update Mississippi's hate-crimes laws failed last year, too.

Rob Hill, who heads the pro-LGBT organization Human Rights Campaign in Mississippi, rebuked the leadership in the Legislature in a press statement on Feb. 6.

"We're very disappointed that our lawmakers—including Lt. Gov. Tate Reeves and other leaders in both chambers of the legislature—have refused to vote on these crucial bills," Hill said.

In the Mississippi Legislature, the lieutenant governor appoints committee chairs. Reeves, a conservative Republican who is running for governor and is known for courting evangelical voters, has repeatedly taken anti-LGBT positions in the past.

"For the second year in a row, lawmakers have decided to play politics with LGBTQ people's lives and deny Mississippians the opportunity to have a meaningful conversation about these proposed updates to our hate-crimes laws," Hill said. "Support for these bills is widespread, bipartisan and non-controversial. As LGBTQ people face a disproportionately high risk of hate crimes throughout the South and in Mississippi, we have to ask legislators: what are you waiting for?"

Federal hate-crime laws do include sexual orientation, gender identity and disability, whether real or perceived, as a result of additions Congress made with the Matthew Shepard and James Byrd Jr. Hate Crimes Prevention Act that President Barack Obama signed in 2009; however, that still left state law enforcement in places like Mississippi without the ability to bring state-level hate-crimes charges, leaving them to depend on federal law enforcement to bring them. Send tips to [email protected]