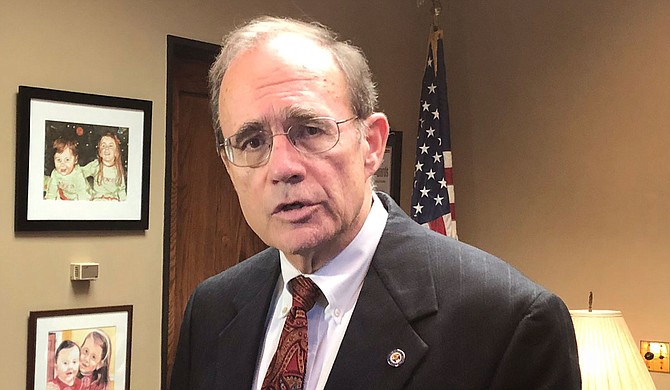 Mississippi Lt. Gov. Delbert Hosemann, who will become the new lieutenant governor and Senate president next month, told reporters Tuesday that he is looking at options for expanding Medicaid in Mississippi. Photo by Nick Judin

The Mississippi Senate could still expand Medicaid access to as many as 300,000 residents who currently have no health-care access, Delbert Hosemann, the State's incoming lieutenant governor, told members of the press Tuesday.

"We've been in consultation as recently as last week with Arkansas about how they expanded, Indiana, Louisiana, and others on how they increased their availability of health care, some of which stepped in ditches, and they wished they hadn't," said Hosemann, a Republican who is currently secretary of state.

Since 2013, Mississippi has foregone more than $1 billion in federal funds to expand the program each year, as Mississippi's Republican leaders refused to accept the money because it is part of former President Barack Obama's signature law, the Affordable Care Act.

Incoming Gov. Tate Reeves, a Republican who is the current lieutenant governor, said throughout this past year's campaign that he is opposed to "Obamacare expansion." Since the Nov. 5 election, he has been less vocal on the issue, but did recently warn Republicans not to go down the path toward expansion. He could veto Medicaid-expansion legislation if the Legislature sends it to his desk.

Expansion Could Save Rural Hospitals

The Mississippi Hospital Association has warned that expansion is vital to save rural hospitals, by cutting down on the number of people getting emergency-room care with no ability to pay. Since 2013, five rural Mississippi emergency rooms have closed, including one in Houston, Miss., where a woman suffered an asthma attack earlier this year and died, unable to get to an emergency room in time. MHA cites the State's rejection of expansion money as a major driver of the closure. A study earlier this year found that half of Mississippi's hospitals are in danger of closing.

Hosemann supported expansion throughout the campaign, pointing to other red states that expanded as models. Those states enacted more conservative-friendly provisions, like work requirements, to make expansion more palatable to GOP voters. Hosemann said he thinks "narrowing" expansion to "individuals who have skin in the game" is the right idea.

"A mistake would be catastrophic to Mississippi," Hosemann said. "We don't have the chance to make a mistake. When we do this we have to learn from the issues and the mistakes other states have made. ... Also, there seems to be a little more room about how you negotiate these arrangements, including things like working requirements, including things like contributory requirements.

"In order to get covered you have to be contributory. If you're not working a job or seeking a job, you're not getting covered. Narrow this down to individuals who have some skin in the game," he added.

Arkansas' work requirements model has introduced its own share of problems, though. A December 2018 report from the Center on Budget and Policy Priorities found that nearly 17,000 Arkansas Medicaid beneficiaries lost coverage after a waiver allowed the state to add work requirements of 80 hours per month. Those losing coverage due to the requirements included people with chronic conditions and people who should have met the requirements.

"For example, one working beneficiary with a chronic condition described losing his Medicaid coverage and then being unable to afford medications, in turn losing his job due to his deteriorating health," the report reads. "Another is rationing her medication after being unable to navigate the reporting requirement and losing coverage, despite working 25 to 35 hours each week—which equates to well over the monthly minimum."

If Mississippi expanded, the federal government would pay 100% of the cost for the first few years, then 90% in later years. In a straightforward expansion, that would leave the State on the hook for over $100 million. A 2015 Mississippi Institutions of Higher Learning study did find, though, that expansion would create around 10,000 jobs and add $96 million to the state's economy.

After Louisiana replaced an anti-expansion Republican governor with Democratic Gov. John Bel Edwards, the state expanded Medicaid in 2016. A year in, a report from Louisiana State University and the Louisiana Health Department found that expansion had saved the state $317 million and created 19,000 new jobs, even as more than 470,000 people gained health coverage—100,000 more than anticipated.

The impact on people's lives was tangible, too. Of those who gained coverage in the first year of the expansion, nearly 50,000 people began outpatient mental-health treatment; almost 20,000 began treatment for substance abuse; 7,000 were newly diagnosed and treated for diabetes; 338 women who gained insurance through expansion were diagnosed with breast cancer; and 285 people were diagnosed with and treated for colon cancer.

'We Will Hit the Ground Running'

Hosemann, who will also serve as president of the Mississippi Senate in his role as lieutenant governor, said he has already been having meetings on the issue, but is not yet ready to discuss specifics. He said he is in talks with the Jackson Medical Mall and encouraging its involvement in legislation related to health care.

The incoming Republican leader, whose swearing-in ceremony is set for Jan. 9, 2020, said to expect more details once he names Senate committee chairpersons to public health and Medicaid roles.

Hosemann discussed plans on other major issues, too, including making the Legislature more accountable with video feeds in committee hearings, funding pre-K programs across the state, funding roads and bridges, increasing money for special education and raising teacher pay. He said committee chairs should be ready.

"And I'm honing in all of these thoughts by gathering information from people who are in each of these processes. So, the weekend of January 10th, I hope they rest up, and when they come back, we're going to get started."