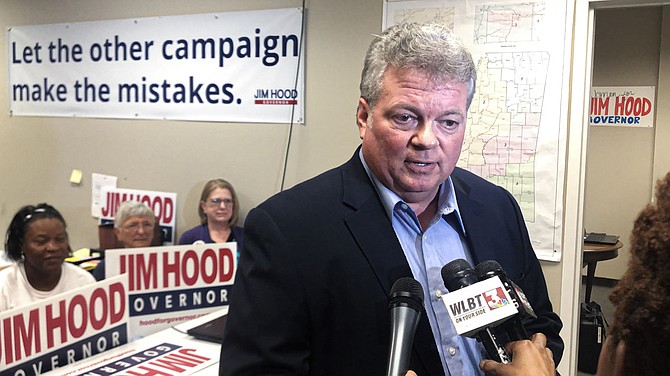 Democratic nominee for Mississippi Gov. Jim Hood speaks to members of the press at his campaign headquarters after Lt. Gov. Tate Reeves wins the GOP runoff for governor on Aug. 27, 2019. Photo by Ashton Pittman

"Justice Waller ran a great race. He ran on issues," Hood told members of the press at his campaign headquarters in Jackson Tuesday evening.

Hood and Waller shared similar views on some key issues. Both support accepting federal funds to expand Medicaid in Mississippi, which could bring access to 300,000 uninsured Mississippians and possibly help save dozens of struggling rural hospitals. Both have also called for yearly teacher pay raises.

'No Decision' on an Endorsement, Waller Says

After the Associated Press declared Reeves the winner, Waller spoke to supporters at his election-night watch party in downtown Jackson, telling them they ran a campaign they "can be proud of."

"We (ran) on issues. We didn't sugarcoat it, we didn't try to tell people what they wanted to hear. We told them what the state needed," Waller said.

He thanked volunteers and staff members, but notably did not endorse Reeves. After the speech, a member of the press asked Waller if he planned to endorse Reeves.

"No decision. That's my answer," he said.

The Jackson Free Press asked why he had not made that decision, yet.

During the runoff, Reeves used ads and mailers to portray Waller, who has a reputation as a conservative judge, as being aligned with Democratic causes and even of being a "socialist." One mailer tried to associate Waller and his health-care proposal with former President Barack Obama.

Another mailer showed an image of Waller next to image of national Democrats, including Speaker of the House Nancy Pelosi, U.S. Sen. Elizabeth Warren, and U.S. Reps. Alexandria Ocasio-Cortez and Ilhan Omar—none of whom have known ties to Waller or Mississippi.

The Jackson Free Press asked Waller if he had any comment about Reeves' tactics.

Hood: Waller Was a 'Gentleman,' But 'I've Been a Prosecutor'

Back at Hood's headquarters, though, the Democratic nominee was happy to volunteer his thoughts on Reeves' portrayal of Waller. While doing so, he plugged his support for eliminating Mississippi's sales tax on groceries—a tax that critics call "regressive" because it hits the working poor particularly hard.

"(Reeves) did run a negative campaign because he doesn't have any issues to talk about. The issues that Justice Waller talked about and that I'm talking about, like cutting the grocery tax and those kind of things, he doesn't have the issues, so he has to revert to scare tactics," Hood said. "And that's been happening throughout history, people playing the race card or whatever it is. Some type of scare tactic. 'Someone's gonna come get you if you don't vote for me.'"

"If you'll notice the difference, though, I'll be laying out the issues in this race. Justice Waller was a gentleman lawyer throughout this race, but (Reeves) is dealing with a whole different person. I've been a prosecutor for all these years, and we've got plenty of rocks to throw—and we're gonna throw them."

Reeves quickly turned negative on Hood in his victory speech on Tuesday night, comparing him to some of the same national Democrats he had also connected Waller to in recent weeks.

"Jim Hood will tell you that welfare and Washington are the only things we need," Reeves told supporters, referring to Hood's support for Medicaid expansion, which numerous Republican governors across the country have already implemented.

Hood criticized Reeves for pushing through a series of tax cuts in 2016 that mostly benefited out-of-state corporations and shaved $260 million off of yearly state revenues.

Hood wants to bring back some of those taxes on out-of-state corporations, and hopes to use that money to help pay for repairs to hundreds of crumbling and closed roads and bridges across the state. Waller supported an increase in the state’s gas tax to pay for those repairs. Hood’s campaign says they would support a gas tax increase only as a last resort compromise, in the event that the Legislature would not agree to things like bringing back the corporate franchise tax.

Some Waller supporters, he said, had already told him that they planned to support him if Reeves won the Republican primary.

Reeves won Tuesday night's runoff with 54% of the vote to Waller's 46%. Reeves, Waller noted in his speech that night, outspent him 5-1, thanks to his significantly better and nationally connected fundraising operation.

Voters will choose between Hood and Reeves in the general election on Nov. 6, 2019. Voters must register 30 days before an election to be eligible to vote.

If Fitch wins, it will be the first time in modern history that Mississippi elected a Republican attorney general. Hood, who has held his post since 2003, is the only Democrat who currently holds statewide office.

CORRECTION: In an earlier version of this story, Jackson Free Press State Reporter Ashton Pittman wrote that Attorney General Jim Hood supports raising the gas tax to pay for roads and bridges. That is not entirely accurate; he has said he would support increasing the gas tax only as a last resort. We apologize for the error.