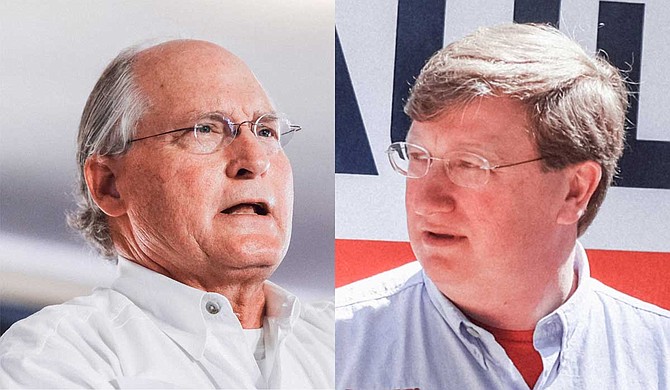 Mississippi Lt. Gov. Tate Reeves' campaign sent a mailer to Mississippi voters this week with the word "OBAMACARE" emblazoned across it that includes false information about the health-care plan that his opponent in the Republican runoff for governor, former Mississippi Supreme Court Chief Justice Bill Waller Jr., is proposing.

Waller's plan, which he calls "Medicaid reform," would accept more than $1 billion in yearly federal funding to expand the state's Medicaid program, which would bring affordable health-care options to about 300,000 Mississippians and could keep dozens of financially imperiled rural hospitals afloat.

For one, Reeves' mailer claims Waller's plan would "cost state taxpayers over $200 million per year." The plan that Waller supports, which the Mississippi Hospital Association introduced in May, would not rely on state tax funds.

The federal government has already agreed to pay 90% of the cost of Medicaid expansion, which would leave the state to pay around $159,000 per year by 2025 under a straightforward expansion, the Mississippi Institutions of Higher Learning estimated four years ago. That study also estimated that expansion would create 9,000 new jobs in the state, adding an extra $96 million to coffers each year by 2025.

Under Waller's plan, though, Mississippi taxpayers would pay none of the remaining 10%. Instead, recipients of expanded Medicaid would pay limited fees, including a $20 monthly premium and $100 for nonemergency ER visits, while hospitals would cover the remaining costs.

Reeves' mailers also claims Waller's plan would "drive up the cost of private health insurance" and "cause thousands to lose their current insurance." It points to Louisiana, which expanded Medicaid in 2016, as having experienced these pitfalls.

Reeves' mailer claims Waller's plan would "cost state taxpayers over $200 million per year." The plan that Waller supports, which the Mississippi Hospital Association introduced in May, would not rely on state tax funds. Photo courtesy William Bova

Last year, the Louisiana Department of Health partnered with Louisiana State University to study the impact of Medicaid expansion on its economy. The 2018 study found that the expansion helped create about 19,200 jobs throughout the state, and about $3.5 billion to the state's economy.

Since Mississippi leaders, including Gov. Phil Bryant and Reeves, declined to expand Medicaid, five rural hospitals in the state have shut their doors. The 2015 IHL study warned that "without the Medicaid expansion, hospitals (would) be faced with the need to find new sources of funds ... in order to cover the cost of providing uncompensated care to the uninsured." Rural hospitals have cited the cost of providing emergency treatment to uninsured people who cannot pay as a factor in closures.

No rural Louisiana hospital has closed since that state expanded Medicaid, though. Across the country, 106 rural hospitals have closed, and 72% were in states that declined to expand Medicaid.

"Some say we are doing fine. The fact is, we have 31 rural hospitals on the verge of closing," Waller told a crowd at the Neshoba County Fair on Aug. 1. "This is where we are. This is the decision point."

The Jackson Free Press called Waller's campaign on Wednesday evening for comment, but a spokesperson said they would need to look at the mailer before responding.

"This negative, attack mailer is the definition of politics as usual because it is 100% blatantly false—not just some of the points, but literally every reference to Waller's positions are false," the statement reads.

Current Mississippi Treasurer Lynn Fitch and Madison attorney Andy Taggart also go head-to-head in a runoff in the GOP race for attorney general on Aug 7, as well as runoffs in a number of Jackson-area legislative and Hinds County races.