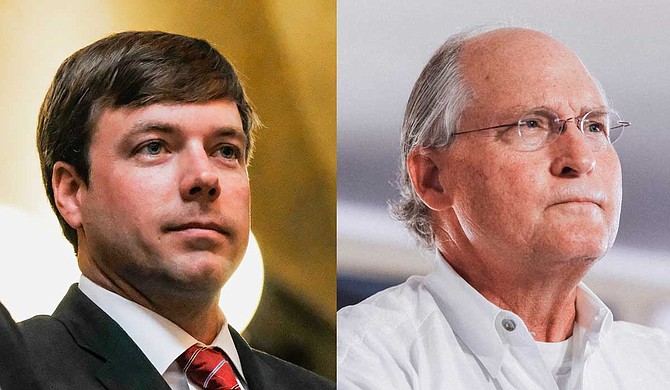 Foster, who placed third in the Aug. 6 primary with 18% of the vote, will make the announcement at 9 a.m. at the Wade Inc. John Deere Dealership in his north Mississippi hometown of Hernando.

"Looking forward to making a formal announcement regarding my endorsement (or not) in the #msgov runoff tomorrow in Hernando, and where we go from here," Foster tweeted late Monday morning, without naming the endorsee.

Foster did not respond to a request for comment on Sunday evening, but the source, who asked to remain anonymous, said "it's a done deal."

In a Monday morning press release, Waller's campaign also teased a series of three press conferences "to announce (a) major endorsement" in Gulfport, Hattiesburg and Jackson for Tuesday. Waller will hold his Jackson press conference downtown at his South State Street office at 5 p.m.

In the Aug. 6 primaries, Waller was able to push Lt. Gov. Tate Reeves, the GOP frontrunner, into a runoff by keeping him below the 50% plus one ballot threshold required to win a nomination in the first round. Reeves won 48.9% of the vote.

While Waller has kept his campaign focused on meat-and-potatoes issues like health care, roads, and bridges, Foster spent time on the campaign trail touting his support for President Donald Trump and wading into national politics by attacking out-of-state congresswomen who make up "The Squad"—a tactic used even more frequently by Reeves. To varying degrees, Reeves and Foster have both used harsh language and emphasized cultural issues designed to draw support from evangelicals and Trump conservatives.

While Reeves and Foster share similarities on rhetoric, Foster and Waller often found themselves aligned against Reeves on the issues. One of the main issues of contention is Medicaid expansion, which would bring health-care access to about 300,000 Mississippians who make too much to be eligible for traditional Medicaid but do not make enough to be eligible for private insurance subsidies through healthcare.gov.

Since the Affordable Care Act's implementation in 2013, Gov. Phil Bryant and Lt. Gov. Tate Reeves' resistance to President Obama's signature health-care law has caused the State to forego billions in federal funds that could have been used to expand Medicaid. Not only has it kept a large number of Mississippians from having realistic health-care options, but it has also imperiled already-struggling rural hospitals that would see a boost if more Mississippians had access to Medicaid. Five rural hospitals have closed in the state since 2015, due in part to the state's decision to forego expansion.

Foster, like Waller, supported some version of Medicaid expansion, which they call "Medicaid reform"—messaging designed to make it easier for Republicans to accept the idea of Mississippi implementing a major component of Obama's law. Reeves, though, remains completely opposed.

At the July 23 televised Republican debate, Reeves declared that he was "the only conservative" on the stage and repeated his opposition to expansion, which he calls "Obamacare expansion." Foster shot back, saying that while he thinks "Obamacare" was a bad thing, Reeves' rejection of billions of dollars to bring health care to more Mississippians is out-of-touch.

"It's hard for somebody like the lieutenant governor to understand this because he's been on the government rolls the last 16 years of his life and had everything handed to him by the taxpayers in Mississippi," Foster said.

Waller said his plan for "Medicaid reform" would be fiscally responsible.

"There is no cost to the state," Waller said. "The hospitals have agreed to underwrite it, and what the participants pay will fund the program."

"I do not believe it would be no cost to the state. That's a fairy-tale belief," he claimed. At the Neshoba County Fair on Aug. 1, Waller told a crowd that he is a conservative, and because of that, he believes that people who want to work should be able to do so without having to give up health care if they make too much to qualify for traditional Medicaid.

"I think we should incentivize people to work. I was told yesterday about a young man who works every day. He needs a diabetes pump. He can't get any kind of insurance," Waller said. "Well, folks, this is the people we would bring in on Medicaid reform. Those that are trying to work. You know, we get that young man a pump, he may be a full-time employee in a year. Isn't that what life's all about? Don't we need to give people a step up?"

Reeves' Donations from the 'I.V. League'

Earlier this month, the Jackson Free Press reported that Reeves received $20,000 from the Mississippi Medical PAC, a physicians PAC that touts itself as an "I.V. League" of donors. It has repeatedly endorsed and donated to political candidates in the state who oppose Medicaid expansion, including Bryant and Reeves.

Waller and Foster also received large donations from pro-expansion PACs that represent hospitals, including $50,000 to Waller from the Mississippi Hospitals PAC.

Mississippi Attorney General Hood, the Democratic nominee whom the ultimate GOP nominee will face in November, announced his support for Medicaid expansion when he launched his campaign last fall.

At last month's debate and at the Neshoba County Fair, Foster and Waller also jointly criticized Reeves for the way he pushed through a $3 million expansion of the state's voucher program, which transfers public education funds to tuition for private schools. Republican leaders, including Reeves who is president of the Mississippi Senate, snuck the money into an unrelated funding bill just minutes before asking members to vote—without telling them about the voucher funds.

The Aug. 27 primary runoffs are open to any registered voter. However, if you voted in one party's primary in yesterday's election, you cannot switch parties and vote in the other runoff.

"If you voted in the Republican primary yesterday, you cannot vote in the Democratic primary in three weeks and vice versa," Hinds County Republican Party Chairman Pete Perry told the Jackson Free Press on Aug. 7. "If you did not vote, you can vote in whatever primary."

After voters decide, the GOP nominee will face Hood on Nov. 5. Current Mississippi Treasurer Lynn Fitch and Madison attorney Andy Taggart also go head-to-head in a runoff in the GOP race for attorney general on that day, as well as runoffs in an number of Jackson-area legislative and Hinds County races.

Mississippians must register at least 30 days before an election in order to be eligible to vote and must show an accepted form of photo ID at the voting booth, a list of which is available on the Secretary of State website. County circuit clerks across the state offer all residents free photo IDs that they can use to vote.