Men and Corporate Donors Dominate in GOP Runoff for Governor 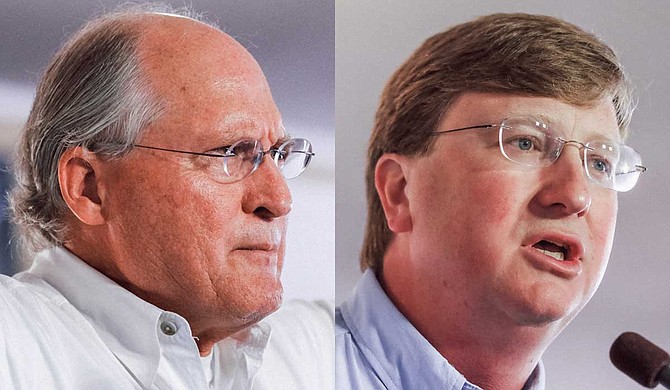 More than $3 million has flowed to the two candidates in Mississippi's Republican primary runoff since July 27—and the bulk of that money came from political action committees, corporations and men.

In 2015, the RSLC spent more than $600,000 to help defeat Initiative 42, which would have required the Mississippi Legislature to follow the law and fully fund the state's public schools. That money went to a group that ran ads "promoting fear that one (presumably black) judge in Hinds County would control education funding if 42 passed," the Jackson Free Press reported at the time.

Reeves, the current lieutenant governor who also serves as president of the Mississippi Senate, opposed Initiative 42. In the years since, he has repeatedly opposed raising teacher pay and supporting giving bonuses to teachers in affluent schools, which perform better. This year, he helped block a $4,000 teacher-pay raise, allowing only a $1,500 pay raise to go through. He said the State of Mississippi could not afford a bigger raise.

Then, he and other Republican leaders in the Legislature helped force through $3 million in funds for private-school vouchers on the penultimate day of the Legislature by slipping it into an unrelated appropriations bill just minutes before a vote and without telling legislators.

Waller has criticized Reeves for the teacher-pay and voucher moves last session, promising to support a teacher-pay raise every year until Mississippi, which has some of the lowest teacher pay in the country, matches its neighboring states in the southeast U.S.

In the most recent filing period, Waller received $20,000 from MACPAC and $10,000 from Ergon State PAC, the political arm of the Flowood-based petroleum refining company Ergon. Of the 10 biggest PAC donations, though, seven went to Reeves.

The Presidential Coalition LLC, a Washington, D.C.-based pro-Republican PAC, gave $10,000 to Reeves. It is affiliated with the Citizens United Foundation, an organization that succeeded in overturning limits on corporate donations to PACs. Reeves also received $5,000 from Mississippi 4th District Congressman Steven Palazzo's Patriot PAC; $5,000 from the Mississippi Associates General Contractors of Mississippi.

The lieutenant governor drew in $274,000 from donors giving $2,000 or more during the period. Among that total, 36% came from out-of-state donors, PACs and corporations.

Waller, meanwhile, pulled in $312,000 from donors giving that amount in the same timeframe, with just 96.8% of that coming from donors in Mississippi.

Just five women made solo donations. Four of those donated to Waller's campaign, including attorney Rebecca Dickerson, and Community Counseling Services CEO Jackie Edwards in Starkville, and local Jackson actress Ali Dinkins. One woman among the top 81 individuals donors donated to Reeves; she gave $2,500 and listed herself as a "homemaker."

On paper, Reeves raised millions more than Waller from July 27 to Aug. 17, $2,505,006.12 to Waller's $548,023. But $2.2 million of that came from Friends of Tate Reeves, a separate committee Reeves has been using for years to store up money for his run for governor. Excluding those funds, Reeves pulled in just $505,006.12, slightly underperforming Waller.

The Flowood-based Pure Water Ridge, LLC, was the top corporate donor in the runoff period, giving $40,000 to Reeves, who is also from Flowood. Two corporate Waller donors tied for second place, with the Ridgeland-based Glacier Holdings, LLC, and Hattiesburg real estate company CRC Properties, LLC each giving him $10,000.

The Hattiesburg Clinic Healthcare Policy Committee's donation to Waller came after he visited the clinic earlier this month for an endorsement from his former GOP primary opponent, House Rep. Robert Foster.

Waller's clinic stop was a significant reminder of one of his key platforms and perhaps the biggest issue of the campaign. He supports what he calls "Medicaid reform," which would bring affordable health-care options to about 300,000 working Mississippians whose households make too much for traditional Medicaid but not enough for subsidized private insurance.

In speeches and in ads, Reeves calls Waller's plan "Obamacare expansion," a reference to the fact that President Barack Obama's signature health-care law, the Affordable Care Act, makes Waller's plan possible. He challenged Waller on it at the final GOP debate that WJTV hosted on Wednesday night.

"I'm actually the only person running for governor that is opposed to more Obamacare in Mississippi. I don't believe that putting 300,000 more Mississippians on government health care is a good solution," Reeves said, sitting at a news desk next to Waller.

The Mississippi Hospital Association claims that expanding Medicaid will help save dozens of rural hospitals in the state facing financial peril.

"Justice Waller has demonstrated to us an understanding of the issues facing our citizens' access or lack of access to health care and our hospitals' financial pressure," Hattiesburg Clinic Executive Director Tommy Thornton said before introducing Waller at the Aug. 13 press conference.

Under the ACA, states could expand the Medicaid program to fill in the "coverage gap" between traditional Medicaid and private subsidies. Mississippi Gov. Phil Bryant and Reeves, though, rejected the idea, along with more than $1 billion a year from the federal government to pay for it, leaving a large number of Mississippians with no realistic health-care options.

In the last filing period, the Mississippi Medical Political Action Committee donated $20,000 to Reeves. The PAC's website shows that it is made up of "physicians from across the Mississippi and their spouses." The MMPAC touts the mission of its "I.V. League" of donors of actively supporting "pro-medicine candidates and public policy to "advance physician-friendly and patient-driven legislation." The PAC has endorsed anti-expansion candidates in the past, including Reeves and current Mississippi Gov. Phil Bryant.

Top Overall Donors Since the Start of the Campaign

Jim Hood, Democratic nominee for governor (as of July 27)

After voters decide, the GOP nominee will face Attorney General Jim Hood on Nov. 5. Current Mississippi Treasurer Lynn Fitch and Madison attorney Andy Taggart also go head-to-head in a runoff in the GOP race for attorney general on Aug 7, as well as runoffs in a number of Jackson-area legislative and Hinds County races.