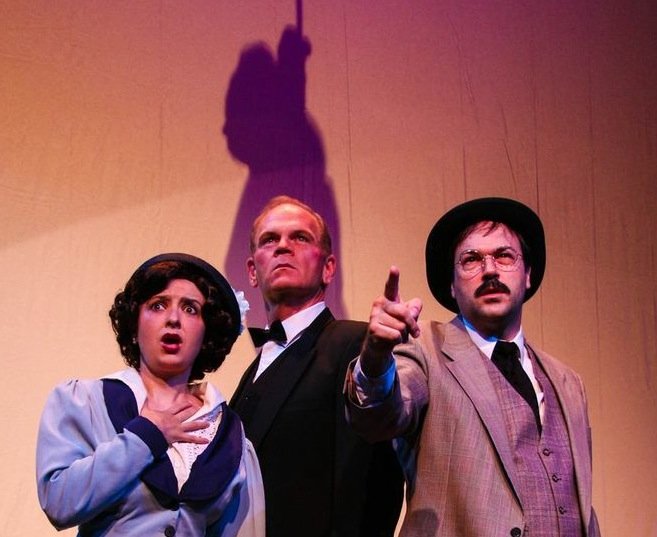 New Stage Theatre kicks off its 48th season with an intriguing story of mystery, magic and murder. But it's also a play full of dark humor and fun for the audience.

In "Sherlock Holmes and the Adventure of the Suicide Club," playwright Jeffrey Hatcher introduces the audience to the famous detective at the lowest point in his career—so low, in fact, that he's considering offing himself. He joins a suicide club whose members are men all sharing the same objective. They accomplish it through what they call "Suicide by Second Party." A game of chance selects a victim for the evening, as well as someone to carry out the deed. The play takes place over several Club meetings, which give rise to a mystery that Holmes must solve.

The play's source material is a series of three fictional detective short stories by Robert Louis Stevenson about a secret society of people out to self-destruct. Hatcher inserted the characters of Holmes and Dr. Watson into the mix, so the story became a Sherlock Holmes adventure.

Brent Lefavor, resident designer at New Stage, makes his directorial debut at the theater with this production. Lefavor says it's an exciting piece that promises the audience a lot of entertainment. "(The production) includes magic, illusions and a lot of technical wizardry," Lefavor says. Robert Day, a local magician, worked with actress Ali Dinkins, who plays the club secretary and happens to be a magician, to ensure that all the tricks and sleights of hand are just right.

Regular New Stage audience members will see some new faces on the stage, as well as familiar ones. Among the 10 cast members, Ray McFarland played the role of Holmes with John Howell as Dr. Watson in a prior Sherlock Holmes play at the theater; both reprise those roles for this performance, joined by eight other actors.

The play's staging presents several technical challenges, but Lefavor says the cast and crew responded enthusiastically and will surprise the audience with what they've done. For instance, the story requires the depiction of several murders. This is accomplished through a series of silhouettes and backlights. Additionally, this being a Sherlock Holmes adventure, Holmes has to figure out a number of clues along the way. Lefavor, who has a background in lighting shows, worked with Doc Davis, production an - d lighting director at Belhaven University, to project the clues onto the stage so the audience gets to unscramble them. "Look for the phrases 'Hector M. O. Fly MS' and 'Bounds Ice Joe,'" Lefavor says, adding that they hold keys to unraveling the mystery.

Although the show moves throughout several scene changes, Lefavor says, "I wanted to keep the pace up and transition without any blackouts. I presented this as a challenge to Richert Schug, the set designer who joined us last year as an intern, and he's done a great job accomplishing it." With a high-energy cast and lots of visual treats, this fast-paced show promises to be a murder mystery that will keep you on the edge of your seat ... and laughing.