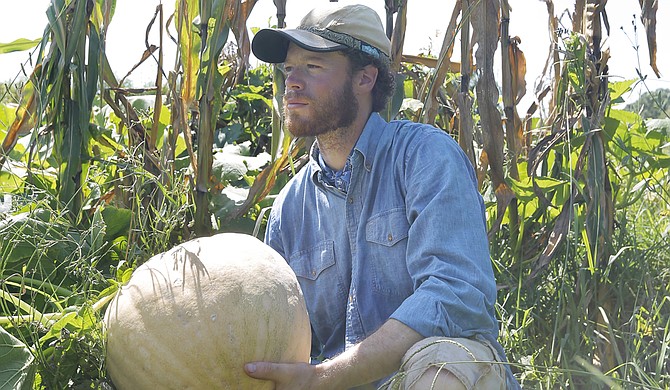 At a recent Fondren's First Thursday, Taylor Yowell set up a booth along State Street to sell vegetables, including yellow and green squash with a pronounced line between the two colors. Yowell said it was a zucchini-squash hybrid called a zephyr squash that he grew on his farm in Madison County, The Garden Farmacy, along with herbs and other vegetables.

Like his vegetables—mostly heirlooms but also creative hybrids of familiar things—Yowell's livelihood and life itself is one grown through cultivating a wide range of unusual experiences and bringing them back home to where he started.

Yowell, 29, grew up in Madison, where he graduated from Madison Central High School in 2005. After attending Jones County Junior College and studying civil-engineering technology, he got a job with Warnock & Associates engineering firm. In 2011, he became interested in improving his health and developed an interest in whole-food nutrition.

As he tried to find foods that would do that, Yowell became "curious about how to grow and provide (that) product and acquire it," he told the Jackson Free Press. Ultimately, he decided to learn how to do it for himself and started researching organic farming.

Four years ago, he took a leap of faith to figure out how to start a farm. He found organic ones around the country and sent resumes far and wide in the hope that one would offer him a chance to work and learn. After three weeks of phone interviews with Greenfire Farm in Hoopa, Calif., he was offered an apprenticeship, so he put in his two weeks notice with Warnock, packed his car and drove to California in 2011.

Yowell spent the next two years on several farms. After Greenfire Farm, he worked at Rolling River Farm, a homestead where he learned techniques of year-round farming. "When you homestead, you not only produce product to sell, you live off the land yourself, so we were milking goats, raising chickens, ducks and turkeys, and growing orchards of fruit trees," he said.

He returned to Mississippi in 2014 to work with farmer Will Reed at Native Son Farm in Tupelo while traveling back and forth between that farm and his mother's house in Madison, all the while look for land to lease in the Jackson metro area.

He met developer David Landrum in Madison, and when Landrum shared his vision for the Livingston development having a farm that grows the food for the restaurants, he knew he wanted to be a part of it.

Since 2014, Yowell has leased three acres at Livingston for The Garden Farmacy. Yowell farms the Livingston land by hand and provides produce and herbs to local restaurants (County Seat and The Gathering at Livingston, and Lou's Full-Serv and Babalu Tacos & Tapas), as well as farmers markets. He recently started a community-supported agriculture, or CSA, that runs for 16 weeks in the spring and summer and 12 weeks in the fall. It offers home delivery or pick-up and has become an important part of his business plan.

Long-term, he wants to diversify his operation and include not only vegetables, but also fruit trees, flowers and herbs. He will also expand the operation by transitioning his Livingston property to pure row-crop farming while homesteading on six acres and a farmhouse he recently purchased outside Clinton in Hinds County.

"It's a dream come true," he said, but he said it's also both physically difficult and financially a challenge to make a living because it's a solo endeavor.

Despite the challenge, Yowell loves farming. "Practicing what I've learned in distant places and bringing it literally down the road from where I went to high school, and trying new crops and techniques here" made that leap of faith four years ago worthwhile, he said.

The Garden Farmacy (116 Church Road, Madison, 769-226-6700) will host Okra Fest, a free family-friendly event that will feature garden tours, local vendors and more on Aug. 14 beginning at 3:30 p.m. to dark. For more information, find the farm on Facebook.