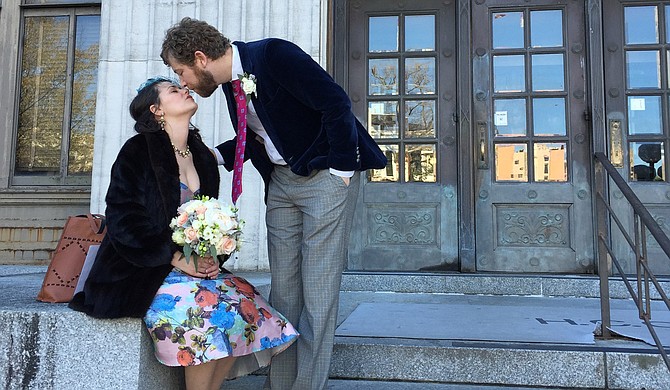 When Sarah Gayden Hammond (then Harris), met Andy Hammond at Sneaky Fest at Sneaky Beans in Fondren in August 2011, she was wearing a Raggedy Ann and Andy shirt. Hammond says her first boyfriend was a Raggedy Andy doll, so her friends thought it was funny that she met Andy that night. Their relationship began with putting all their cards on the table, and for them, it just clicked.

As Sarah Gayden tells the story, she went to Sneaky Fest with work colleagues from Mint the Restaurant during a rare solo day out while her daughter, Eva Claire Courson, was with her dad, Shappley Harris. Andy, also a young parent (a father of two boys, Walt and Davis), was there with a group of friends as well. A mutual one, Matt Fitzsimmons, introduced the two. Sarah Gayden asked Andy to buy her a beer, and she says he said, "You should know, I'm liberal as f*ck, and I have two kids."

Sarah Gayden says that with that moment of honesty, she knew they were a match, because having a child herself, "There's no room for playing games," she says.

The feeling was mutual, and Andy followed up the meet-cute with a text around midnight. Two days later, she drove to Philadelphia, Miss., where he lived for work as an attorney for the Mississippi Band of Choctaw Indians, for a date. Andy nervously made dinner (pork tenderloin—a love of food is something the couple shares) and, "Within a week, I met his parents," she says.

The couple dated for about four years, and when Andy proposed, it was in a way that was private and intimate and at home, much like that first date. Sarah Gayden says, "It was at 5 a.m. in the bedroom. Nobody else heard it; it was just us, in the dark of morning, which was great, because who you love is with you in the dark moments of life."

When it came to planning a wedding, they similarly kept it simple.

"I never had a wedding 'vision.' And we have three kids (between us)," Sarah Gayden says. "It's all about them, so I just looked at Andy and knew that at the end of the day, I just wanted to be married to him; a wedding (ceremony) was never something I fantasized about."

The couple also has family members and friends scattered far and wide around the globe, and they knew that coordinating everyone's schedule would be stressful. "I wanted her to have whatever it was she wanted it to be, but ultimately, it just became more about the two of us (than guests or the ceremony), so ... we just did it," Andy says.

They enlisted Sarah Gayden's best friend, Mary Sanders Ferriss, as witness and coordinator and planned a courthouse wedding before a Justice of the Peace. After realizing she couldn't wear her mother's dress like she wanted to, she ordered one from ModCloth. They planned to celebrate after the wedding with a dinner at Parlor Market afterward, but other than that, the bride let go of her self-professed perfectionist tendencies, realizing, "At the end of the day, what I'd be stuck with is Andy, so the pomp and circumstance didn't matter," she says.

After a nail fiasco and the task of getting ready taking a long time, the bride and maid of honor were late, so the groom had to talk Judge Ivory Britton into staying while the Sarah Gayden and Mary Sanders drove from Fondren with the windows rolled down to dry their nails.

Luckily, Sarah Gayden made it to the courthouse just in time for the couple to marry in 2015 (their goal) on Dec. 18, and to take some fun and memorable photographs to share with family and friends. (The maid of honor also served as the photographer.)

Because they kept it simple and as small as possible, Andy says, "The good thing (about the day) is that we remember everything about it, and weren't worried about anyone or anything else. It was a day just to ourselves, that was about us."

Sarah Gayden adds, "I wouldn't do it any other way."

As they think back on the day, and on what formalizing the union and their family means, Sarah Gayden says, "I cannot tell you the overwhelming feeling of security" that comes with marriage. She says it's evident in their relationship with the kids, too.

Julie Skipper is a friend of the bride.

Groom's and groomsmen's attire (where you purchased or rented if you did so specifically for the wedding): Etsy  Bride's attire: ModCloth, Etsy