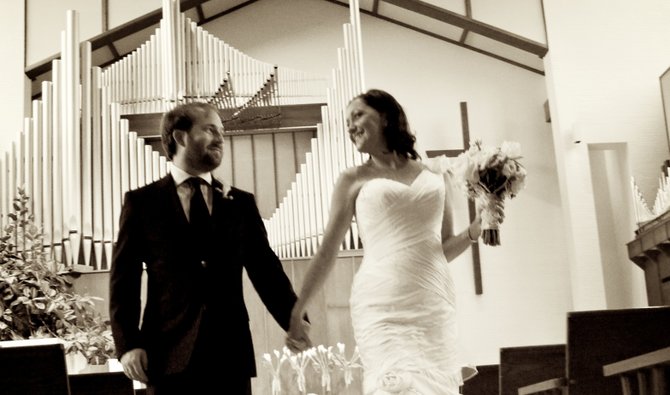 Kirby Boteler and Christina Cannon wed in a ceremony inspired by Paris and “Breakfast at Tiffany’s.” Photo by Courtesy Brice Media.

One evening, Christina Cannon talked to her friend Kirby Boteler about the things important to her in a partner. "He has to enjoy good food, good wine and have a passport," she told him.

Without missing a beat, he responded, "I have two out of the three and can fix the third." The response surprised her. And Boteler continued to surprise Cannon as their friendship--which started out at a gathering of a Bellwether Church small group--grew into becoming Sunday night "wine buddies" at BRAVO! and finally blossomed into romance.

So, about that missing passport requirement. Over the past several years, Cannon had established a tradition of traveling--alone or with a friend--over New Year's, and Paris was her favorite destination. For the 2012-2013 trip, Boteler surprised her with tickets for a trip for two. As girls in a relationship sometimes do in such situations, Cannon started to wonder if she might be in for a Paris proposal. But surprising her again, Boteler popped the question in October. The couple decided Paris would make a perfect honeymoon, and so a whirlwind of wedding planning began.

As a professional photographer, Cannon has seen the business end and details of many a wedding. When it came to her own, she didn't sweat the small stuff. She and the groom wanted to keep it simple and classic, and their honeymoon location provided the perfect source of inspiration. The two were also inspired by their last Valentine's Day celebration. On the holiday, over a chocolate torte from BRAVO!, they watched the classic "Breakfast at Tiffany's."

Graphic artist Emily Ferguson, of Kendall Poole Event Planning, designed invitations, placecards and rehearsal dinner menus with a Parisian influence. Keeping with the idea of classic simplicity (and, perhaps, Holly Golightly), bridesmaids at the ceremony at Northminster Baptist Church wore black knee-length dresses of their own selection, and each carried a unique bouquet. The bride, surprising herself this time, wore a raw silk gown--she'd always thought she would wear a non-traditional dress--and the groom wore a Versace suit.

Rather than signing a traditional guestbook, those attending the wedding wrote notes of well-wishes in a Paris coffee-table book. As they entered the reception at Fondren's Duling Hall, the sounds of local band Swing de Paris greeted them, as "Breakfast at Tiffany's" played on a screen in the background. Their first dance was to "Moon River," a tribute to Audrey Hepburn's performance in the film. Friends and family celebrated over food by Wendy Putt's Fresh Cut Catering & Floral and pastel Parisian macaroons by Lauren Bowie.

"We were overwhelmed by the outpouring of friendship and love," Cannon says.

The reception wasn't without surprises, either, although this time, the bride surprised Boteler. Due to the quick planning of the wedding and holiday season constraints on locations, venue availability dictated the wedding date. And that is how the couple's anniversary will be the same as the groom's birthday. To make sure that the occasion didn't go unacknowledged, during the reception, the bride surprised him with a birthday cake and the band singing "Happy Birthday."

Another special surprise: Chris Kellum, worship leader at Bellwether, took to the stage and sang "Soulshine," one of the bride's favorite songs.

As the reception wound down, the couple lit and released a wish lantern outside in lieu of a bouquet toss before departing for a night at the Fairview Inn--in the French Room, naturally.

With Boteler's passport safely in hand, the newlyweds departed two days after Christmas for their Parisian adventure, looking forward to plenty of the good food and good wine he promised her when they were still just friends. No doubt, more travels and culinary adventures lie ahead for the couple, as do more surprises. With a smile, the new Mrs. Boteler says, "After five years of knowing him, he still surprises me every day."