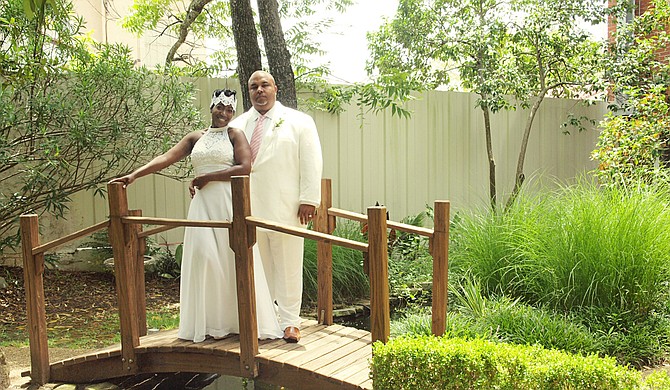 She didn't want to get married in front of hundreds of guests. Instead, she decided to make her wedding as private as she wanted it to be.

Stewart, 36, is a native of Jackson and the previous owner of Posh Boutique, which closed last year. She met her husband, Walter Stewart Jr., owner of Street Toyz Customs and Collision, on a blind date that a close friend set up. Walter took one look at Stewart, swept her up into his arms and gave her a hug. That was only the first date, but Stewart says they've been inseparable ever since.

With both of their spiritual family backgrounds, their family members always asked them the usual questions: "When are you two going to go ahead and get married?" and "What are you waiting on?"

After five years of dating and having a set of twins in 2013, Walter III and Wynter Dior, the couple decided it was time to make their family complete by getting married. Stewart also has a son, 19-year-old Kendravis Alexander.

In July 2010, while vacationing in Los Angeles, the couple got matching tattoos, which Stewart says was a pre-wedding gesture for them to profess their commitment to one another. It wasn't until a trip to their marriage counselor Valerie Jenkins' office that Walter popped the question. It was a surprise, without the actual surprise being included, and one to which Stewart happily agreed.

"It was a blessing that we had our babies, and we wanted to go ahead and make our family complete," she says. "It was a non-formal way of saying we wanted to make things official and get married."

On July 2, the day before her birthday, Stewart walked into the honeymoon suite at the Old Capitol Inn, only 15 minutes late, where she would soon marry the man she wanted to spend her life with.

The suite was white with gold glitter and adornments on the tables and chairs. Tall, gold candelabra sat on top of the tables, holding all-white flowers with white crystals dangling from each one. Large, white drapes lined the walls and hung gracefully to the floor. With the scene set, Stewart's eyes filled with tears as she thought about what would take place there in just a few short hours.

However, no wedding comes without a little pre-matrimonial chaos.

"The violinist Tom Lowe's car broke down on Lakeland Drive an hour before the wedding was set to start," Stewart says. "Luckily, he made it there in time to play."

While Lowe worked to make his way to the venue, Stewart's team did not let her down. They ignored the temporary setback and quickly moved everything into place to help make her wedding day perfect. Her soon-to-be husband stood at the front of the room, in an all-white suit with a light pink necktie, awaiting the bride-to-be's arrival down the aisle.

As Stewart waited in the back room, her mother, Jacquelin Bolden-Smith, gave her what she calls "the three speech."

"She asked if I remembered the way she would style my hair when I was younger," Stewart says. "Three braids intertwined together. One braid is me, the other is my husband, and that third braid is God. It all makes sense."

Stewart wore a backless halter dress with a beaded neckline and A-line waist, which flowed freely as she walked toward her the man who was about to become her husband. She purchased the vintage dress from Ruby's Alterations, and the shop altered it. Stewart opted out of the veil, instead handcrafting a headpiece out of lace and pearls that matched her dress.

Stewart clutched her "something old" in the palm of her hand: a pearl necklace that her mother gave her. Her "something new" was a pair of diamond earrings, which matched the ring on her left hand, that her friend, Tracy Miller, gave her.

With everything in place, Stewart was ready to say "I do." She stepped into the small room that seated all 12 of her guests of parents, grandparents, aunts, uncles and her wedding coordinators—no bridesmaids and no groomsmen. Her father, Napoleon Alexander, walked her down the aisle, and she smiled as she saw the faces of her groom and children.

"I knew all of the people in that room loved me," she says. "I knew I didn't have to question that."

The couple stood in front of their guests and recited their traditional vows to one another. Soon after uttering their "I dos" they cut the cake and spent a few moments with their guests before heading out the door. Sticking to the privacy and intimate setting of their wedding, they had a small post-wedding meal in place of a reception.

Stewart went home with her children, and Walter went off to handle some business at work.