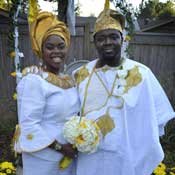 The newlyweds are already planning their first anniversary.

When you meet Kiwana Thomas Gayden, and Lorenzo Gayden, both 36, you can feel the vitality and energy the two create and pour into their interests, talents and their life together. When the two decided to get married, they pooled this energy and performed an exotic and vibrant wedding ceremony not normally seen in the United States.

"We're not religious," Kiwana says. "The ceremony was more reflective of our culture."

Kiwana, yoga instructor, jewelry designer and chemist with the Mississippi Department of Health, met Lorenzo, musician, artist and owner of Sanaa Galleries while the two were giving spoken-word performances at Seven*Studioz, a now closed music venue in Jackson. With so many friends in similar circles, the two constantly found themselves together. They eventually started dating after meeting at the groom's solo art exhibit, also at Seven*Studioz. Five years later, they decided to get married.

"When it came time for us to tie the knot, we knew exactly what we wanted as a couple," Kiwana says. "We didn't waste any time bringing our vision to light."

The couple planned their multi-ethnic wedding in eight weeks. Using their artistic skills and incorporating some from friends and family, they were able to bring about an event that was budget friendly and filled with do-it-yourself touches. They decorated their cake, designed their invitations and wrote their wedding vows.

"Dressing in African garb to keep with the ceremony's theme was optional," Kiwana says.

"But everyone was so glad that we were getting married; they were very accommodating."

The wedding ceremony was comprised of smaller ceremonies that included a libation ceremony, tasting of the elements, lighting of the mishumaa saba candles and jumping the broom. The libation ceremony calls upon ancestors to attend the event by pouring water or liquor on the ground. The bride and groom taste elements that represent emotions within a relationship. Kiwana and Lorenzo's elements were lemon for sour, honey for sweet, peppercorn for hot and spicy, and kola nut for bitter.

"It's a visceral reminder of the 'for better and for worse, in sickness and in health' vow," Kiwana says.

The African-originated mishumaa saba are seven candles that represent seven principles that the couple see as instructive guidelines for their marriage and life together. The principles are: unity; self-determination; collective work and responsibility; cooperative economics; purpose; creativity; and faith. The jumping of the broom is from African American culture and symbolizes the beginning of making a home together.

In addition to the traditional wedding cake, Lorenzo made a Caribbean black cake, which he describes as "a cross between English plum pudding, rum cake and fruitcake." The black cake, which in Caribbean culture is traditionally made for Christmas and weddings, is a mixture of raisins, prunes, and currents soaked in rum and brandy for at least four weeks. Lorenzo's mixture marinated for six weeks. Due to their incredible moist consistency, black cakes are virtually ageless. The couple had hoped for some leftovers to enjoy later; however, the cake was very popular with the wedding guests.

As of press time, the couple hadn't taken a honeymoon, yet. They plan to do something special and just as extraordinary for their anniversary.

Special Touches
• When choosing help during the preparations and planning, the couple turned to those on whom they could depend. "(The event is) all about family, friends and community," Kiwana said. "I couldn't think of anyone else." Professional hand percussionists, all friends of the family, played the ceremonial drumbeats.
• The couple custom-designed the cake, invitations, programs and their rings. The wedding bands display Adinkra symbols of West Africa. Adinkra are intricately designed symbols, each with their own meaning such as love, security and support.
• Lorenzo could not find shoes that fit in with his ceremonial garb and had to stop by every local shoe store to find an acceptable pair. "I picked those up right before the ceremony," he says of his final choice.
• An unexpected guest attended the Oct. 9, 2010, ceremony at the groom's family home in Jackson. Through a little hole in the fence, a neighbor's dog watched the whole event unfold.