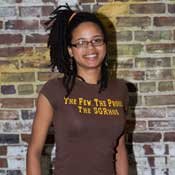 In the stark light of Jackson's spoken-word scene, Scarlette, aka Tori Thompson-Davis, reigns with a silver tongue, hip-hop flair, and sonnets of soul and strife. She speaks in adroit tones and rhymes about love, pain and redemption. She doesn't sugarcoat or soften her words. This is the world as it is, seen through Scarlette's sharp eyes and described through even sharper prose.

"His spirit's entangled in my being's every fiber, though we both know we can't walk this telephone wire. As I pine for him daily, I want you to know, the dangers that postlude a simple ‘Hello,'" Davis wrote in her book, "Scarlette's Letters."

Davis is cheerful woman with a musical voice from Toledo, Ohio. At a young age, her interests were already geared toward the spoken word, writing and social activism. Davis first performed poetry at a peer-leadership conference at age 15. This also served as the first time the name Scarlette came into play.

"There were three other Toris (going on stage). I thought, ‘I'm not about to get up there with the same name (as) these three other girls," the 23-year-old says. "Now no one ever forgets my name."

Scarlette was the original name her mother picked for Davis before her birth. Davis' grandmother, though, worried over what connotations of the color scarlet could mean for a woman. Convinced, Davis' mother went on to name her daughter after her midwife instead.

"I don't worry about connotations," Davis says. "I consider my work to be a reflection of myself."

Davis has been published in Black Magnolias, a local quarterly literary journal that examines and celebrates accomplishments of African Americans, and Oxford American, a southern literary magazine. She moved to Jackson in 2005 to attend Jackson State University where she is the founder of the poetry club, OutSpoken, and is working toward her bachelor's degree in music education. OutSpoken has raised money to help domestic-abuse centers, a storm-damaged orphanage in Haiti and the Lanier High School music department. Davis is also the host of Speak!, weekly open-mic nights at Cultural Expressions.

"My advice to all poets: Surround yourself with people who write better than you," she says.

Good job Tori! We are so proud of you. All of you need to cope her book. It is an amazing work. We have so much great talent right here in the city.